What If? Why You Should Seriously Consider Shopping at Shopworn

Okay, as you know Tempus Fugit accepts no advertising money (actually, maybe I should...) nor do I write "pay to play" advertorial, as the idea of doing that makes me feel dirty, and not in a good way. So I tend to tell you straight, and in this case as a previous customer of Shopworn, I feel secure in giving you this PSA.

Tempting though it is to buy dirt cheap from Grey Market superstores, I have come to realize that every time someone does that (the customer) they (that same customer) are doing themselves a disservice. Yes, they are getting their "watch du jour" at "Deep South" prices, but ultimately they are devaluing their own purchase before it even arrives and they can put it on their wrist!

So what's the big deal? Well, as you know, even though watches and pens are not perishable items like, say milk, they often do have a perceived finite life span. There are several (in fairness) good reasons for this. Each year, brands bring out new models. And while the blind hubris of the somewhat recent past where brands clearly over-produced and simply swept the excess under the Grey Market carpet, it began to dawn upon them (albeit more slowly than it should have) that this was hurting their brand not just in terms of perception, but ultimately in the bottom line. Brands, distributors and retailers were simply trying to cover their nut. But more often than not, that quick rush from an illicit Grey Market dump was as short-lived as a hit off the crack pipe.

What if... there was an outlet mall for watches?

The concept of the outlet mall has obviously been somewhat perverted from its original concept, which was selling the previous year's fashion at a discounted price at a company owned store. In other words, let's say Ralph Lauren had a fuchsia polo shirt that sold everywhere except the midwest. Ralph would "buy back" the stock and off it would go to the outlet mall stores. It was not a "second" or stained or damaged shirt, it just didn't sell well in Elyria, Ohio.  A young guy or gal walks into the outlet store with their birthday money from Grandma and "boom" - it's as if they've found a Ralph Lauren original polo that was made just for them!   Cue "Happy Ending" from that under appreciated Elvis Presley film "It Happened At The World's Fair" -

Okay, but let's get back to watches and pens.  Apart from Movado, or Fossilthere really isn't such a thing as an outlet store. But what if there was a way to get a watch that had been with a retail store, but for whatever reason had not sold and was bought back by the brand, and you could buy it at a very agreeable price point? And you could know with confidence that the watch actually came from the actual brand and didn't drop off the back of a truck, or was part of a large scale product dump? And what if rather than give you a (let's be honest) less than honest claim of "new in box with  its original, factory warranty!" (which will be worthless when you try to get after sales warranty service for it), you were told that not only was this watch authentic, but would be provided with a warranty by the retailer that you bought it from? And finally, what if that retailer could offer you the watch you wanted at a price you could afford, offer warranty service and be able to do all of this because they were working in direct transparent partnership with the brand itself? Now you're interested?  Well you should be!

Now take me, I am not wealthy (remember, no advertising revenue or blood money for advertorial), I am a social worker by day. While I am wealthy when I consider the "warm and fuzzy" ledger in the account book, when I look in the "disposable income for watches, etc." ledger... let's just say that I am not what would be considered a prime demographic for many brands ; )

But that doesn't mean that I don't buy watches, I just have to be careful with how much I spend, and I tend to only buy things I really want to wear myself -

I don't love everything that Graham does. Not a fan of pin-up girls on my watch dial. Having said that, this one I LOVE!  It is the Chronofighter Vintage Chronograph, and if there is any justice in the universe, it will still be available when I have concluded some potentially awkward conversations with my piggy-bank ; )

Now even if this one is not for you (and no offense, but as I want it for myself I hope that it isn't), there is a good selection of watches and pens to choose from. And you can purchase with confidence that it is the real deal.

I can say this as the proud owner of a Montegrappa pen that I purchased from Shopworn. Absolutely as advertised, and affordable for this full-time social worker/sometimes brand consultant and horological raconteur - 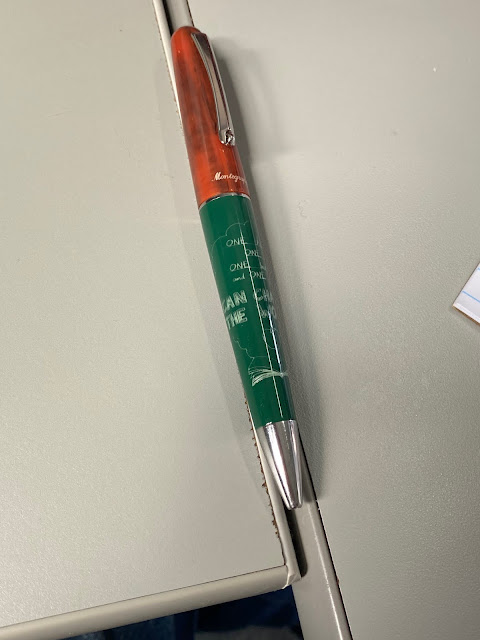