A New Brand From A US Watch Legend

The Swiss watch business, as it is conducted in the US, is a curious game at the best of times. And while there are some glamorous guys and gals who, let's just say are not shy about self-promotion, there are a handful of folks who have been putting in some very serious work for years, and oftentimes do so behind the scenes.
Once such trailblazer is Donald Loke. Mr. Loke has just come out with a new chronograph (actually four) that are already creating a lot of buzz.

And we'll get to those watches shortly, but first, a few minutes with the man behind DLoke Watches, Don Loke -

James Henderson -
Tell us a bit about yourself.  How did you get involved in watch making?
Don Loke -
This is a long story so I will include my CV for your reading pleasure!  An Idea popped into my head in 1974 to be a watchmaker. No one in my family is in this field. I had scholarships to colleges for springboard diving but I turned them down as there were no jobs available. I had 2 brothers who graduated from Ohio State University and they had a very hard time finding a job. I didn't really know what I wanted to do for a living so I decided not to go to school and I worked 3 jobs! After 3 years, I was talking to a friend of mine who worked in a jewelry store and he told me about a man who came in every Friday dropping off watches and picking up more to repair. I thought to myself, dying profession = job security! So I found a watchmaker in the area and spoke to him about it. I ended up applying to Bowman Technical School in Lancaster PA which was considered the best school in the nation at that time. It had a nine month waiting list to get in. There were only 105 students in the school. 60 of them were in watchmaking, 20 in jewelry, 10 in clockmaking and 15 in hand engraving.
James Henderson -
You've worked for some pretty impressive brands.  Can you tell us a bit about them?
Don Loke -
I was very fortunate that  I graduated WOSTEP with top honors, number 1 in the class (I had perfect scores on both exams). From there I was invited to train at Jeager LeCoultre followed by Breguet. At Breguet I had the pleasure to train with Daniel Roth!  He was the man who trained me on the Tourbillon. I came back to the US as the national service center for Breguet. Then I got pulled into the industry as the technical director for several high end brands and service centers for others, ETA, Audemars Piguet, Gerald Genta, Daniel Roth to name a few.
James Henderson -
Your new chronograph is decidedly different.  What was the inspiration behind it?
Don Loke -
I always had a vision to design a Chronograph without the pushers sticking out of the case.  Thus, making it more of a dress watch!
James Henderson -
What was the toughest part of this watch's development?
Don Loke -
The pushers, I was told it couldn't be done!! I said thank you and then set out to prove them wrong!!
James Henderson -
What is your favorite aspect of this watch?
Don Loke -
Designing the pushers to be integrated into the case design was the most difficult aspect and at the same time the most rewarding!
James Henderson -
Where can people get one?
Don Loke -
Presently we are setting up the official launch of the brand. During these tough times, retailers are not looking to take on additional brands. I have approached several retailers with whom I have had long relationships with and they are all wishing me luck. I may have no choice but to do an "Etail" website and build the brand from there. Once I have done that, I will go back to the retailers in key cities and reintroduce the brand to them.  I have 2 bespoke watch movements/designs I will be producing after this dress chronograph!

And now ladies and gentlemen, children of all ages, allow me to introduce you to the Dress Chronograph from DLoke -
GENTLEMENS DRESS CHRONOGRAPH 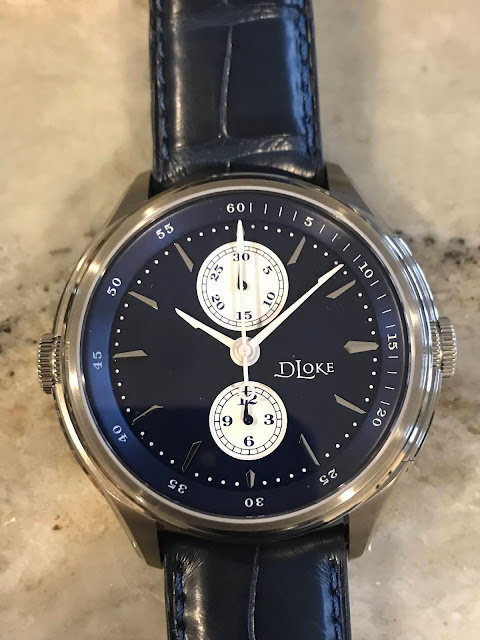 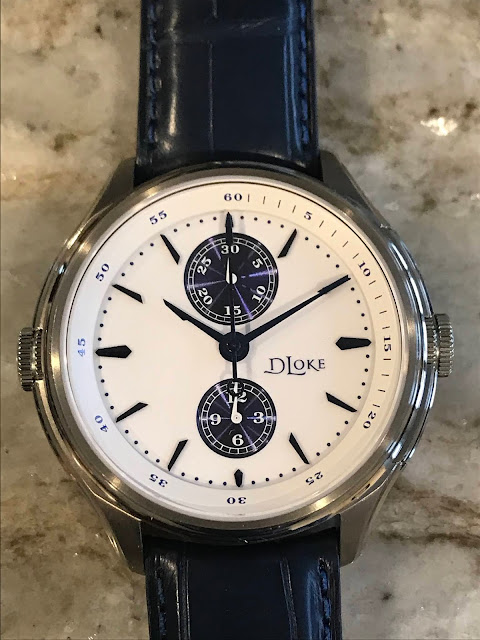 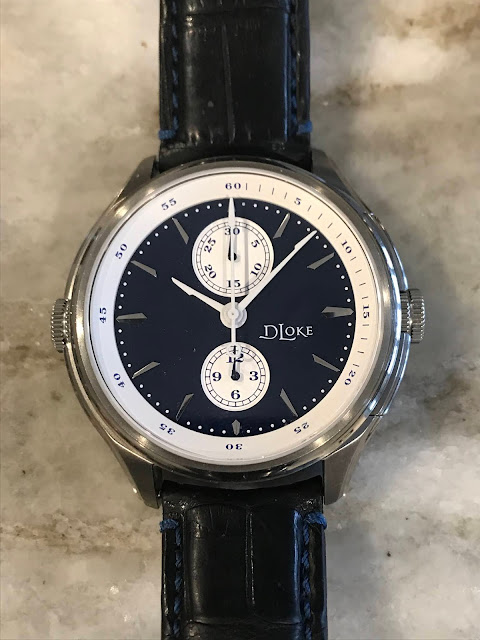 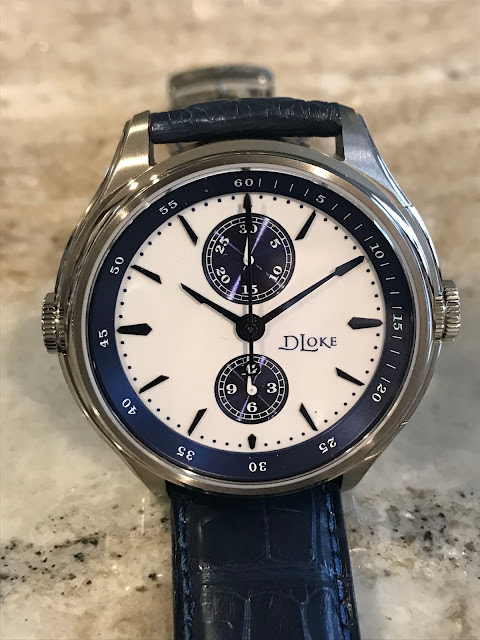 Available in four different versions, this is the first piece of the DLoke collection. 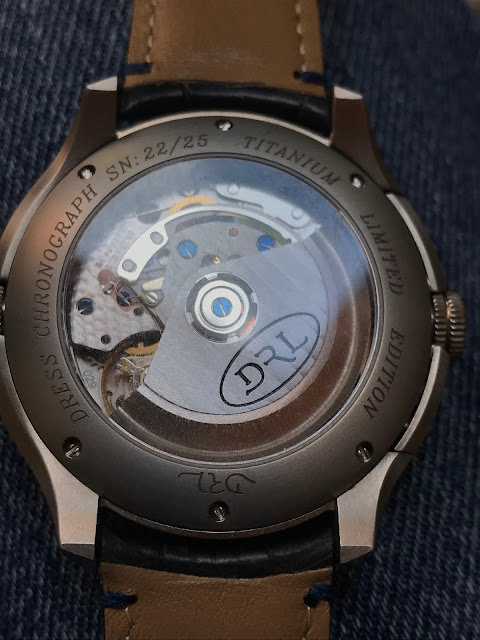 Here is the rundown -


WINDING
· The watch is automatically wound when worn on the wrist. To start the watch we recommend winding 30 turns in a clockwise direction. Going back and forth will not harm the watch. Once set in motion while you are wearing the watch you will not need to wind the watch. It will be wound automatically from the movement of the wrist. If the watch is not worn for a couple of days then manually wind it again.

HANDSETTING
· Pulling the crown out fully and turn in the desired direction to set the hands.

CHRONOGRAPH FUNCTIONS
· Starting and Stopping: The first push on the upper “hidden” Pusher (at 2 o’clock position) will start the chronograph hand moving. The second push will stop the hand.

· Continuing the timing measurement: Another push on the pusher will restart the hand again for further time measurement.

· Resetting to Zero: Once the chronograph has been stopped and the elapsed time noted, pushing on the lower “hidden” pusher (at 4 o’clock) will return all chronograph hands back to the starting position.