Ghost in the Machine

Or what could have been with JEANRICHARD.
As much as I'd like to provide you, gentle reader, with an active link to an actual website, it would appear that the Sleeping Beauty that is JEANRICHARD might, in fact, have slipped away in the night. Or at least sometime in 2016 as that is the last update from their official Facebook page.

This is a shame, a waste and a tragedy. And no, I'm not being melodramatic. JEANRICHARD circa 2013 had real potential, and was starting to move the needle. And with a little more discipline, a little less cockiness, and a few less bone-headed celebrity partnerships they might still be here among the living. My hope is that JEANRICHARD is waiting on a daybed somewhere, surrounded by 7 dwarves awaiting Prince Charming to come along and rescue it. Because hand to God, truth to power - Patrick Pruniaux, this is not only a brand worth saving, it is one that could actually help pull Girard-Perregaux and Ulysse Nardin out of their collective funks. But only if you're ready to either give it a kiss and wake it up, or sell it to someone ready, willing and able to do something with it.

I absolutely believed in JR, so much so that this one was mine for a year or so - 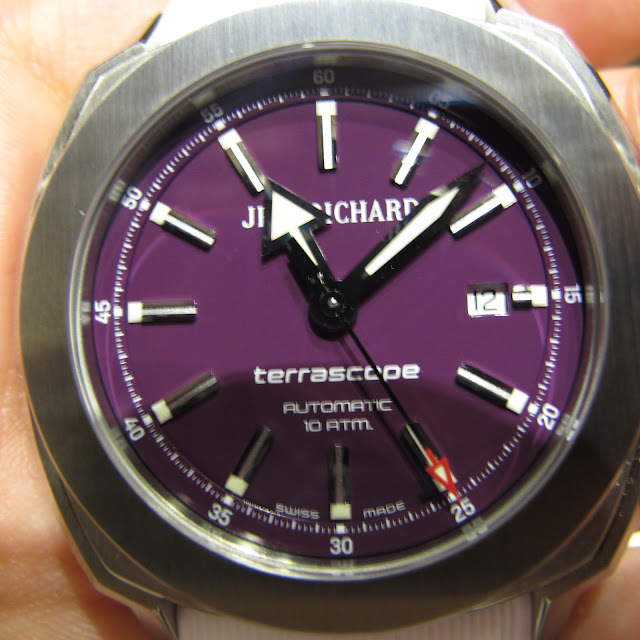 Apologies for the photo quality, this is back when I was taking photos with a Kodak disposable camera and picking up the prints at the Photomat -
So here's hoping that the big swinging dicks in La Chaux-de-Fonds can find a Prince Charming most Rikki-Tik. Here's a summer re-heat on the topic -

Would you buy this watch?  I know I sure would, and for approximately 21 months, most of the watch world would have too.

My personal obsession with both Girard-Perregaux and in this particular case, JEANRICHARD, borders on the unhealthy.  In 2013 JEANRICHARD reemerged from a long, somewhat drunken slumber, born again in the form of a modular casing system that not only allowed for a consistent look across three different families (Terrascope, Aquascope and Aeroscope), it also allowed for easier production and manufacture owing to a standard "chassis".

I was excited.  Hell, most of the watch world was excited.  The timing of the release was, seemingly, cursed as Tudor returned to the US market the very same year.  But curious to relate?  JEAN RICHARD had a very successful debut as GP had decided to come back to BaselWorld, and that first year they enjoyed a fair bit of success.  But post BaselWorld, their marketing and PR folks (both in-house, and the US PR firm that they hired) started making some decidedly dubious choices about how to promote the brand.  They literally walked a "high wire" with Nik Wallenda, rugby players, a Master Chef winner (Luca Manfe), and then grasped for the brass ring with their partnership with Arsenal.  In a PR/publicity sense their eyes were bigger than their wallets.  What started out as a very sound, very rational product offering ran off the rails, and in less than 2 years' time, jumped the shark.
I got an early peek at the new collection in January of 2013, later that year we all got to see everything at BaselWorld.  And that was a curious experience for myself and several other journalists covering the story.  In that first year, it was challenging for JEANRICHARD to get the big dogs to pay attention.  Many of the established outlets poo-poo'd them.  For myself and others covering it, we thought it was something interesting, something cool that had very real potential.  And for us it was great because we had access to review product, we got asked to lunch when the US brand manager was in town, emails actually got answered.

And then there was a shift.  Suddenly the bigger outlets were starting to cover them, and those of us "early adopters" were, essentially, jettisoned from the press list, forced to read the news on other outlets.  But this went further.  Because what had started out as a charming campaign, referring to actual watches, then shifted to a focus on partners, co-branded watches, and the amount of SKUs multiplied at the rate of the cooties in that movie Contagion.

The inevitable happened, in order to make sales numbers, sales managers started looking the other way as the prices were slashed.  It didn't help that the shot-callers were selling directly to trans-shippers and grey market outlets.  You couldn't find a JEANRICHARD at full price, because they were all deeply discounted.  Keep in mind, this all happened in approximately a 2 year period.  From hero to zero.  Their first year back at BaselWorld, they had an equal sized hall to GP.  Year 2, that was halved.  Year 3, there was one room that looked as if the junk drawer of a watch repair shop had exploded, with a very harried PR person nearly in tears trying to present watches in a setting that was not dissimilar to a Walmart following the Thanksgiving Day sale.

Brand managers left for pastures greener, retail partners opted to cut bait, and JEANRICHARD was put into a "Sleeping Beauty", where it slumbers still.  Their last Facebook post was in February, THREE YEARS AGO, and there is no other apparent "proof of life".

But, and it's a big but -
there is one guy out there with the talent, experience, and let's just call it like it is - COMMON SENSE to bring JEANRICHARD back from its deep sleep.   The core collection of three families is good.  People wanted it, they will want it again.  But it will take someone who can park their ego at the door.  A sort of "elite commando" team of watch dogs who can roll up their sleeves, and focus on making and selling watches, not on photo opportunities, friends of the brand and velvet ropes.  It can be done, but it will take some outside of the watch-box thinking.

Focus on watches, communicate consistently and evenly, punch your weight.

Kering, if you're reading this, I know the guy to take this on, and I won't even charge you a finder's fee.