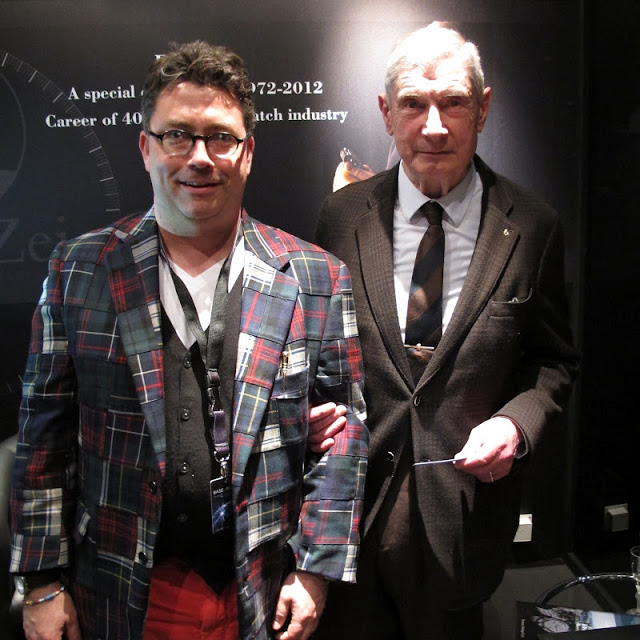 There are times that I feel if I have to read one more hyperbolic press release scooped up and dumped on a tray from the all-you-can-eat bullshit buffet that seems to fuel many of the tonier watch "news" outlets, that my head might simply explode.  From time to time you will be lucky enough to meet someone who reminds you that if you can swim through all of the codswallop, and find something genuine, it's hard not to be romantic about watches.

There were, of course, plenty of interesting watches at BaselWorld 2012, but the best part for me was meeting Dino Zei face to face.  In many ways, there would be no Panerai as it is known now if there had not been Dino Zei.

More than anything else, the thing that struck me was what an unbelievably nice guy he was.  He is no longer with us, but the collections he partnered with Anonimo on are still pursued by collectors.  Curious to relate, when Anonimo was sold off, completely different forums and collector's groups spun off - it was almost like the mid 80s which saw the ill-advised launch of New Coke, only to come back with Coca-Cola Classic a few months later.

A billionaire's plaything now, Anonimo did (and still does) have a lot of unrealized potential.  The Dino Zei brand is, unfortunately, not nearly as well executed as it could be, and is (in a personal effort to be charitable) curiously presented.

From Anonimo to Firenze Orologi
The History of a Florentine Brand 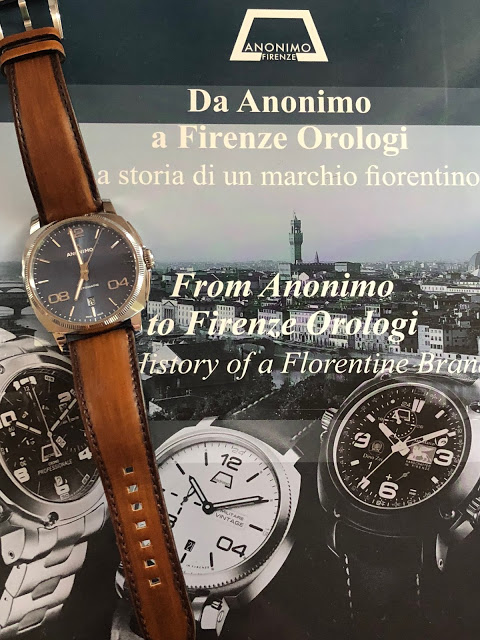 Naval Officer, watch designer, writer - dare I say it... Renaissance man! And now a few minutes with Dino Zei -
James Henderson - What was your first watch, was it a gift? Is there a story behind it?
Dino Zei - It was a gift and there is not a real "history behind" it. It was a gift from my parents, for my First Communion. Unfortunately I don’t remember the brand. I only remember how important that watch was for me. I used it for many years, in the conviction that the first watch is received for the First Communion, the second after high school and these two may be followed by a third one, purchased with your own money. When I was with Panerai in the 90s, we came out with two Panerai models based on Panerai models of the ‘30s, I learned that there are a lot of people out there who like owning a higher number of watches.

JH - Florence has become a bit of a new contender for watch making. While it would be easy to simply point to Panerai - and as the man formerly responsible for Panerai it would be easy to, there must be more to it - what are your thoughts on this?
DZ - Florence is traditionally rich in terms of “craftsmanlike” companies. Prestigious in terms of geniality and initiative. These are companies that invent, design and produce products, many of which fall within the “luxury” market. The international level of prestige that Florence enjoys has its roots in our Renaissance, rendering these products extremely valid in terms of sales. Watches are obviously present among these different product sectors. For them more than anything else, “luxury” means originality, beauty and high quality.

JH - When you were a boy, what did you want to be "when you grew up"?
DZ - I wanted to be a Navy Officer (War Navy) when I grew up. I always wanted to do that, without any specific reason. Perhaps I had a romantic idea of the Navy…I was born in Viterbo, a city far away from the sea and lacking any maritime tradition or vocation. I was eleven years old when my dad took me to the sea. And I saw it for the first time in Civitavecchia, where my father and I went by train from Viterbo. The memory of that day is linked to the intense smell of rotten algae that is often present at the sea. The expanse of the horizon impressed me but did not surprise me, nor did it move me. Thinking about my life, I can say to have always loved the Navy deeply without ever being in love with the sea, which for many aspects, I have never appreciated.

DZ - After having left Panerai I wrote a book: “La Panerai di Firenze” (Panerai of Florence), which in its second edition was titled “La Panerai in Firenze” (Panerai in Florence). Starting from the ‘30s, Panerai carried out intense and profitable study, design and production activities in sectors with high technological content and created many products, all valid, original, some extremely complex and innovative. But operating in the military sector and with highly secret products, it has always adopted the lowest possible profile. For this reason, Panerai was mentioned only for watches in texts and debates (also current texts): those of the ‘30s and those of the ‘90s. I didn’t think this was acceptable and I decided to write at least about the most significant aspects of all the activities carried out by Panerai until the end of the last century - a report on what Panerai did in different periods and with different men. In the monthly magazine “Orologi”, issue no. 248, of May 2011, a review of my book is included.

JH - And prior to that, you were in the military, correct? How did that experience prepare you for the world of watch manufacturing?

DZ - In the military sphere, time has an absolute authority. Military life is always marked by time. Military activities are always programmed and possibly carried out in line with different timelines, with such diligence that for someone not familiar with it, it may appear maniacal. But it is essential for all those complex activities, like military ones, for which success depends on the orderly performance of various related actions. For this reason, the watch must be in the mind of each well trained operator, in addition to his wrist, and it must inspire and control the actions instinctively.

JH - How did you come to join Anonimo?
DZ - After having written the book that I previously mentioned, I realized that I wanted to continue to deal with watches. Dr. Massacesi, creator and back then owner of Anonimo (and an admirer of Panerai), proposed to me to create the “DINO ZEI” brand with which to design and create a line of Anonimo watches, and I accepted.

JH - I know that it is not always easy to choose a favorite child - but if you had to, what is your favorite Anonimo?
DZ - Anonimo watches are all beautiful, because they are designed with care, reflecting on each detail. One of the most beautiful, in my opinion, is the “DINO ZEI”, “GLAUCO” model, automatic, with box in bronze and blue dial.

DZ - The “Panerai Workshops” of Richemont Group. It has continued to produce “Panerai” watches in large scale, without giving up the main characteristics and high quality in terms of precision, reliability, readability of the dial, charge autonomy, etc…I’m thankful to the Richemont Group for having brought Panerai watches to an important position on the market. The “Luminor” watches in particular have witnessed heroic deeds and do no have a low-profile aspect, as I said in my book: "that makes them unusual at the wrist of a woman and unsuitable to that of man of weak thoughts". I always felt they represented a product that was easy to sell for who has the necessary resources. Therefore, the Richemont Group was right.
JH - If you weren't doing this, what do you think you might be doing?

DZ - I can’t think about activities other than the many activities I do. All interesting, some prestigious.

JH - What is a typical day in the life of Dino Zei?
DZ - I’ve been leading a very secluded life for many years now, after I’ve lost my wife. I have undergone a surgery with consequences that have remarkably limited my practical activities. I had the opportunity to institute two annual scholarships in the memory of my wife, to contribute to the medical research on the pathology that affected her. I continue dealing with this with great pleasure. Moreover, I read a lot. I barely write.

DZ - The advice that can be given to people that quit a military career to operate in the industrial and commercial sphere depends, in my opinion, on the sector in which they will operate and also on the specific activities that they will carry out. I can only recommend to them that they operate without ever forgetting the principles of deeply felt honesty that has been taught to them, and always try to carry out their work in an ethically correct manner, taking pride in their work.