News dropped this morning that there is a NEW movement manufacturer, producing a viable option to the 2824!

And as big news like this should come straight from the source, here it is:

Washington, DC (USA), October 2019 –
Atelier, a new movement manufacture in America, is introducing an automatic watch movement to the North American market.
Atelier is a U.S.- Swiss venture that is closely collaborating on establishing the supply, assembly, and manufacturing of automatic movements in the U.S. One of the objectives of the U.S.- Swiss alliance that led to the creation of Atelier was to develop an 11 1⁄2 caliber suitable for the volume market in the U.S. The result is the Caliber 1. With ETA ceasing to supply third party clients on 31 December 2019, many brands in the U.S. are seeking alternative suppliers. The Caliber 1 is not a clone of a pre-existing caliber, however it is a drop-in replacement for popular calibers brands are currently using.

The Caliber 1 has been in development for the past four years with U.S. involvement for three of those four years. Atelier’s Swiss technology partner is one of the few manufacturers in the Swiss watch industry that has achieved horological independence with the internal production and manufacture of hairsprings and the escapement. Everything is made in- house, except for the jewels, barrel springs and shock- absorbers with all parts made to the highest industry standard.

The Caliber 1 is a robust movement that is Chronofiable® Certified with a transversal balance bridge. This allows for stable and precise positioning of the oscillator. The bridge’s rigidity greatly improves shock resistance. The Caliber 1 has a diameter of 25.60mm and a height of 4.60mm, 28,800 vibrations per hour / 4 [Hz], with a power reserve of 44 hours.

Atelier will initially supply Swiss Made movements to brands beginning in January 2020. Atelier will begin assembly and production of small parts and will offer three levels of assembly; Swiss Made, Assembled in the USA, or Made in the USA from domestic and Swiss parts. In the future, Atelier will offer a variety of calibers that will fit the vision of any brand or designer including small seconds, and GMT. 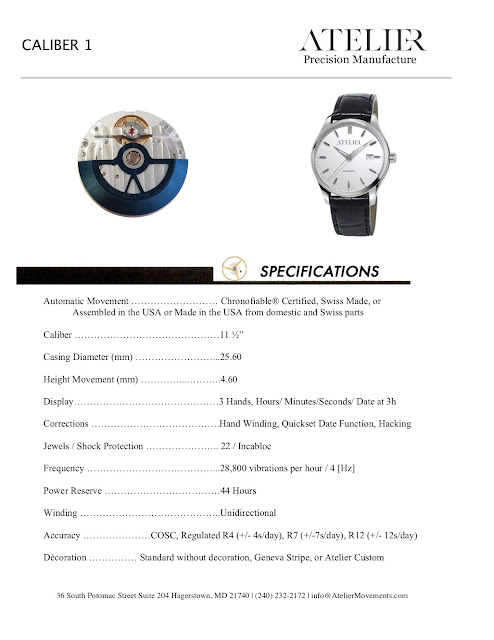 Obviously, this is breaking news, so there will be more info in the coming days.

Any watch fans within hailing distance of Washington DC?  RUN, don't walk to District Time to check it out in person!