I first put this out there 2 years ago.  Another Tour de France has rolled around and it's time once again for hundreds of mad people to sadistically pedal their bicycles on a fool's errand throughout the French (and this year for a few days, Belgian) countryside.  So in honor of them, and some of my own cycling heroes, I thought I'd reheat it.  This year is special with Bob Roll taking over from the recently departed Paul Sherwen.  And so far he is doing an admirable job, although the rather curious decision to interview Lance Armstrong during yesterday's stage left a decidedly bad taste in many peoples' mouths - mine included.  C'mon Bobke!  At any rate, here you go -


In Honor of the Tour de France - A Family that Does NOT Crack Under Pressure!

Cycling, particularly Le Tour?  It's all about time.

Today is the grand finale of the 2017 edition, and as I type this the riders are approaching the Avenue des Champs-Élysées for the final circuits of this year's race.

Cycling is still exciting, but I long for the time when there was a bit more grit to it.   No radios taped to riders ears, and the only performance enhancing substance was a ham sandwich and a bottle of pilfered red ; )

But this year is very special, and for many ways the Tag-Heuer / 7-ELEVEN story line has come full circle - Taylor Phinney, the son of two-time Tour de France stage winner Davis Phinney will be completing his first ever Tour de France.  The Phinney's in many way typify what the Tag Heuer motto is all about.

And as for the son?  Taylor Phinney became a professional racer and was showing a rather precocious talent.  This year he surprisingly found himself in the polka-dot jersey reserved for the King of the Mountains.

It was a short-lived honor, but one that Phinney the Younger relished and enjoyed - reminding us that there is actually meant to be some joy, wonder, and passion in sport!

And truth be told, we didn't really think we'd see him do so well.  In fact, many cycling experts weren't sure if Taylor Phinney would be able to be able to walk unassisted at this point.

In the 2014 US National Road Race championship he suffered a horrendous accident that was so bad, his future as a cyclist was a secondary concern to whether on not he would even get to keep his left leg.  Yes, it was that bad.

But here we are, 3 years on, and another Phinney is helping animate 3 magical weeks in France.

Of course you could site genetics for his natural ability - his mother was not exactly a slouch on the bike... Connie Carpenter, the winner of the first ever Olympic Road Race for women at the 1984 Olympics in Los Angeles.

But that is just about the innate talent, what this family embodies is well beyond their skill and speed on a bike.  They are unbreakable, and it is their every day lives, facing adversity and coming back from it that make them so inspiring.

So Tag Heuer, if you're reading this (and I'm sure you are) here are some famous people who did not crack under pressure!

And on that note, a summer repeat:

The year was 1990.  I was in my final year at the University of Oregon, and was visiting my father over the summer break.  I had one more term to go, and two days before I was set to head back to Eugene, my Bullovawatch pooped out.  Trying to find someone capable of changing the battery was on par with finding an honest politician - it just didn't seem to be possible.  So on what must have been the fifth attempt to get a battery changed with no success, I looked down in the display case and saw what would become my first Swiss watch.  The Tag Heuer Formula 1, circa 1990.

I realize that we all had different introductions to Tag Heuer, and this was mine.  And out of necessity, a passion was born.

I have shamelessly borrowed this advertisement image from Calibre 11 - not directly Calibre 11, it was pulled-up via a Google search for images.  Hope you don't mind ; ) 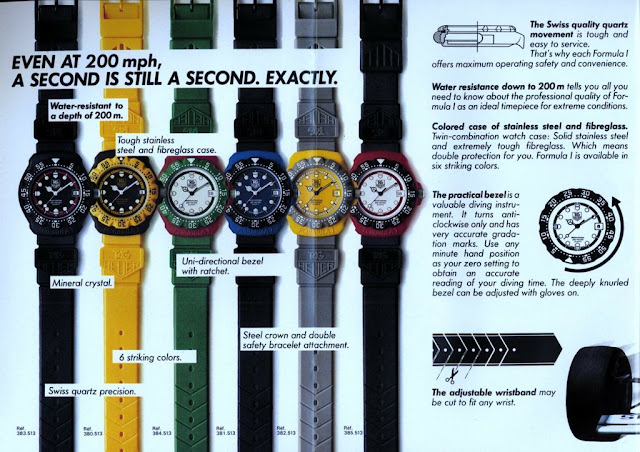 All of the models in this ad were available, but the one that went home with me was the third from the left, the red case, green strap and bezel - or as I came to refer to it - the 7-ELEVEN Tag Heuer Watch!
Andy Hampsten and the 7-ELEVEN team were my cycling idols in the 80s. 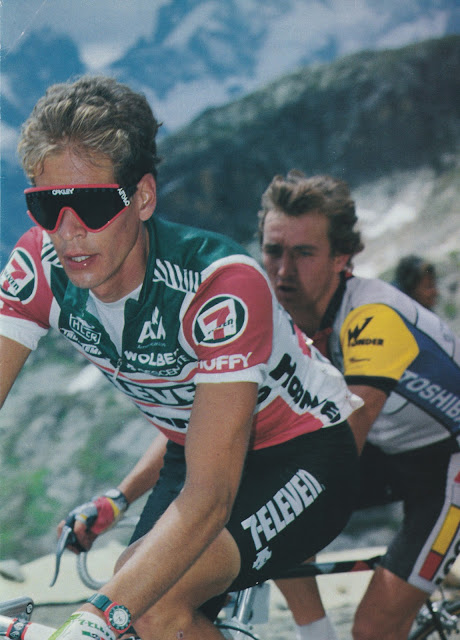 And he was the first American winner of the Giro D'Italia back in 1988.

And the Tag Heuer connection to cycling (and my passion) went even further and was clearly shared by others, including one of the main voices of Tour de France television coverage today (at least here in the US) Bob Roll, a team mate of Hampsten's on team 7-ELEVEN.
Bob, or "Bobke" as he is often known is perhaps my all-time favorite cyclist.  Not because of his many wins in big-time races... let's face it, there weren't many!

But Bob, Andy and the rest of the 7-ELEVEN team perhaps best embodied what Tag-Heur's motto is today - they did NOT "Crack under pressure".  No matter what the odds, Bobke put it all out there!
Apart from Hampsten, and Davis Phinney, they were a team made up of journeymen dreamers.  Riders who had a sort of, "what the Hell, let's give it a go" attitude.  Keep in mind, this was the era of a certain fellow known as "the Badger" and a host of other cycling GODs.  But these guys threw their hats in the ring and gave it a go.  And in an age where US cyclists were viewed more as amateurs, they came to Europe and impressed the Europeans. 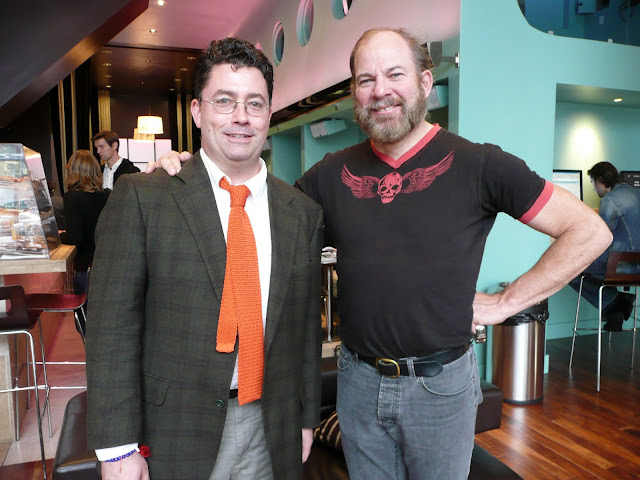 My identification with Tag Heuer went beyond just the 7-ELEVEN connection.  It was clearly a great brand with a great watch, but like team 7-ELEVEN people didn't just take that at face value.  Tag Heuer had to put in a lot of time and effort to get where they are today.

So as we wait to hear how much the Cara Delevingne auction brings in, I thought it might be fun to think back to some other "underdogs" that Tag Heuer partnered with, back in the 80's.

Enjoy your watches!
Posted by James at 3:45 PM