Editor's note - this review originally began the week before I left for BaselWorld, and I wore the Siduna during the fair alternating between my Minase 5 Windows and my Sartory Billard.  I then wore it for an additional 2 weeks following the fair. 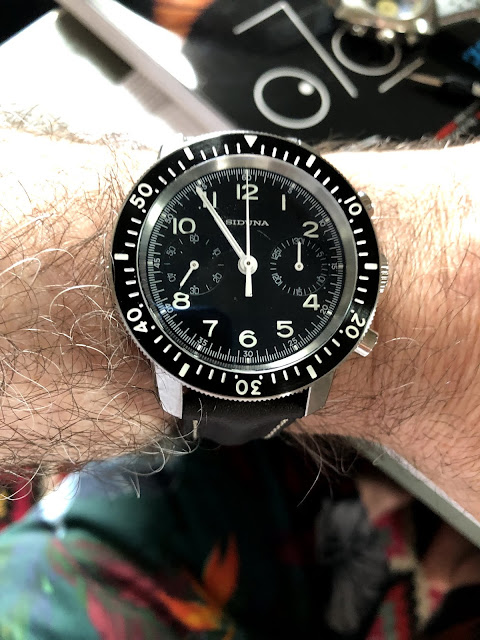 Since the announcement of the launch of the new and improved Siduna, I have been very anxious to get my hands on one and put it through its paces.  As I was getting packed-up and ready for BaselWorld, the folks at Siduna asked if I'd like to take one of their new chronographs for a test drive during the fair, and so I took the M3440 along with me. 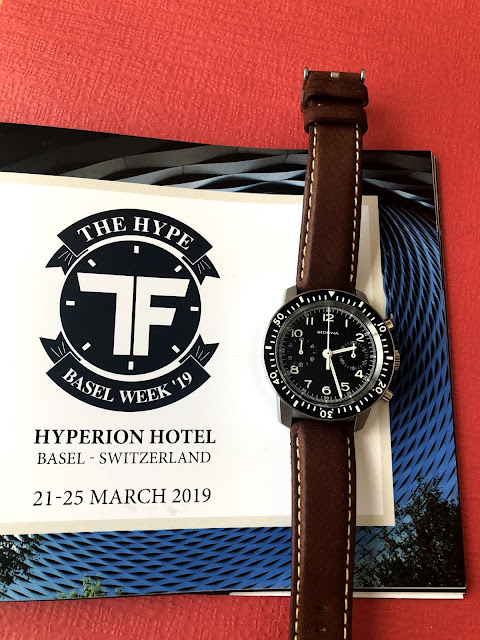 During the fair, I wore a few different watches, and as I was "working" on behalf of Minase and Sartory Billard, I wore those watches while on duty at The HYPE.  But I switched to the Siduna M3440 for my time inside Hall 1 and other press appointments.

Now as my photography skills are, I have been led to understand, somewhat lacking, here is a nice shot directly from Siduna so you get a flavor for the M3440 -


So you get the idea.  I got a lot of double-takes and comments like -
"I thought you were a social worker, how'd you afford a Type XX", etc.  Upon closer examination, several people were struck by the level of finish, as well as the look and feel of the watch itself.

Well, let's get back to the review itself -

I will concur with my colleagues in the Fourth and Fifth Estates on the build quality of the M3440.  It is first rate.  The case is definitely in the "Godilocks" category when it comes to size - it is just right.  It measures 40 mm in diameter, with a case height (or thickness) of 16.1 mm.  The unidirectional bezel extends slightly beyond the confines of the case diameter, measuring 42 mm in diameter. 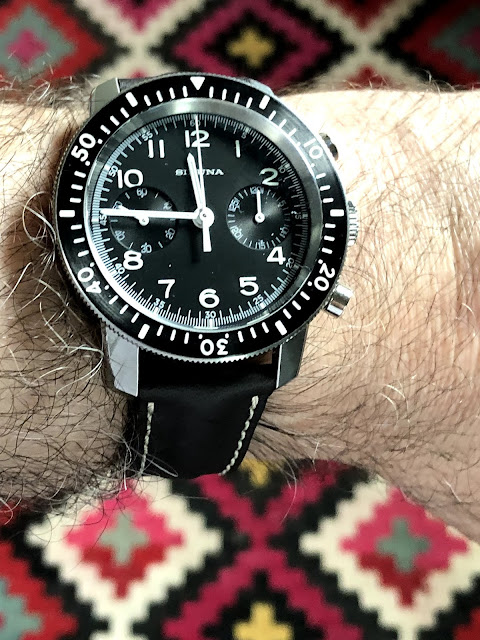 (apologies for the dust spots, I did not give the watch a complete wipe-down for each photo). 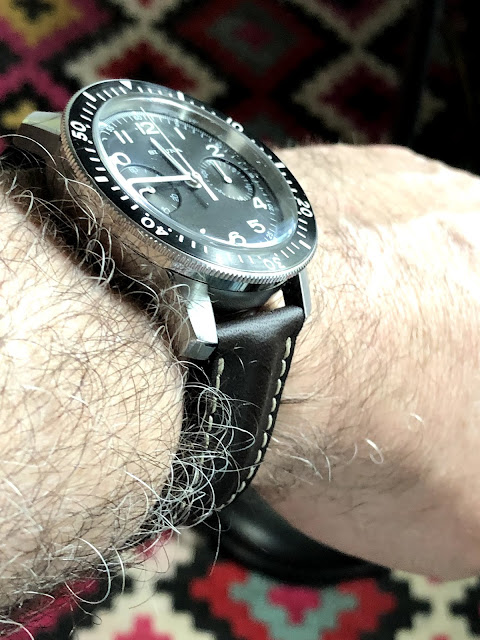 The watch has presence, but I don't feel like a poser wearing it.  It is a "wrist-appropriate" size.  And although it has some stature owing to its height on the wrist, it is nothing to forbidding. 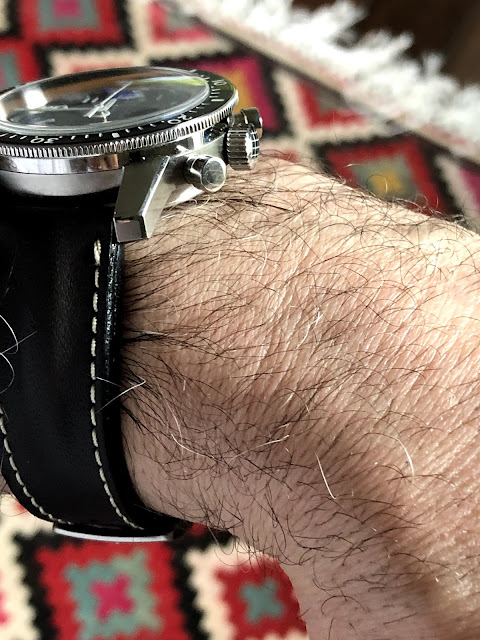 Now before everyone goes off having a Eureka moment, let's just clarify that 316l falls into this category.  But it is still kind of a fun way to describe the steel type as opposed to the typical numeric designation.

The case back is solid, not a display back and I am profoundly grateful for that.  It maintains true to the overall aesthetic and the original inspiration for the watch. 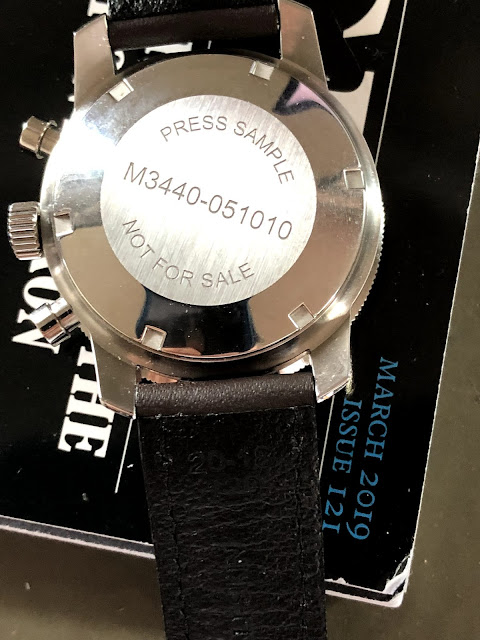 And just what is the inspiration?  Well, curious to relate, Siduna is now based in Sweden.  But it wasn't always so.  Siduna started out life as a Swiss brand, and then it went the way of so many, shuttering due to the decline of the mechanical watch business.  But  Siduna then found a new home in Sweden and recently the brand changed hands one last time and is now back in business and making watches.  The case of the M3440 is based on a somewhat "standard" case of it's time, incorporated into a watch that was used by the Svenska Flygvapnet (that's Swedish Air Force to you) in 1973.  The original design, per Siduna, was from Ervin Piquerez's SA design, circa 1968. And if it bears similarities to cases of the same era from Breguet, Heuer, Lemania and Bucherer (among others) that is because it was a pretty standard solution.

The bi-compax chronograph ran smoothly, re-setting was tactile and precise.  The time keeping beyond reproach, in short?  Everything worked as advertised.

The movement is based on the Valjoux's 7750, and again, before all the Pointdexters out there feel the need to express their expertise on this matter, and how it couldn't possibly be, blah, blah, blah...
Relax, it is not exactly an "off the shelf" solution.  In Siduna's own words -

Our movements are based on an automatic ETA 7750 with Top finishing. They undergo several substantial modifications in a small workshop from La Chaux-de-Fonds, such as the removal of the date mechanism and the relocation of the minutes subsidiary dial from 12 o'clock to 3 o'clock thanks to a proprietary module, and an upgrade to blue screws. The calibre 13 Phi received additional modifications on the back side to add the fly-back function.

The crown is screw down, and bears the markings of the famous (albeit esoteric) Compressor model that was, you guessed it, produced by Piquerez.  And for those of you so inclined, a pretty solid piece of research on the subject can be found here -
https://medium.com/sidunawatch/piquerez-from-drivers-to-pilot-watches-961957c25d5d?fbclid=IwAR0na59MUz1ZIzwBzRHNlAMsfm-yQtb5kUv-ws-Kv-6SXmFyhsjr0Z2DAiI 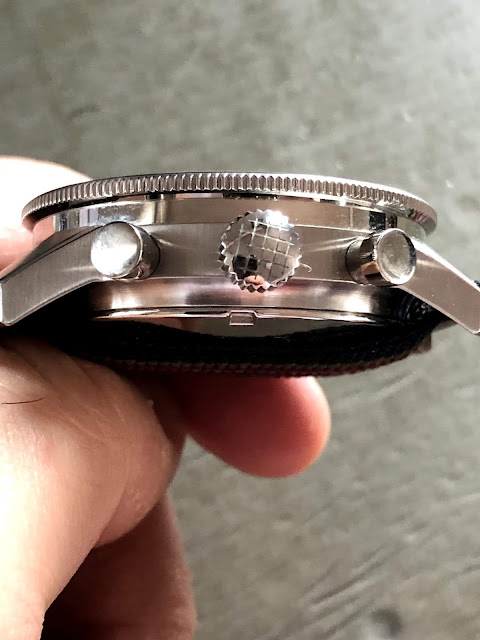 But, important to note that although the crown bears the markings of the Compressor, it is not the same function, it is aesthetic, but I think pays a nice, subtle homage to the original case.

Now last, but not least?  The strap!  The strap is a very, very nice bit of kit!  This one is the Havana Brown version.  Curious to relate, it was a very comfortable strap right out of the box, whereas some straps can be a bit stiff even after the "get ready roll" - 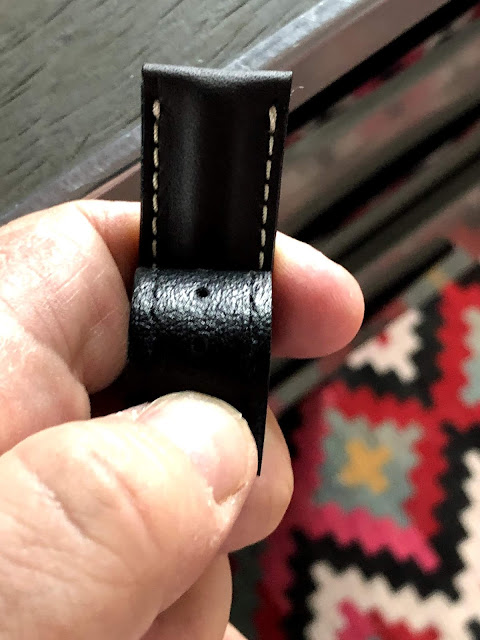 So here's a friendly tip from your old pal Henki, who learned it from his old pal Rod:  if you have a strap that you feel is too stiff (calfskin!  I would not necessarily recommend this approach with anything exotic), simply roll the strap ends up like a tube of toothpaste.  And boom!  You're ready to rock!  The strap itself was smooth, supple and extremely well finished.  The perfect pairing to the M3440.  It is completed with a signed Siduna buckle - 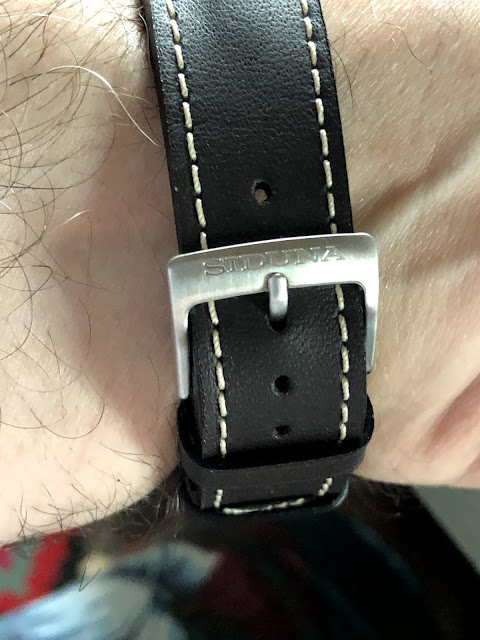 But just to keep things interesting, I had pre-ordered an Erika's Original strap  - 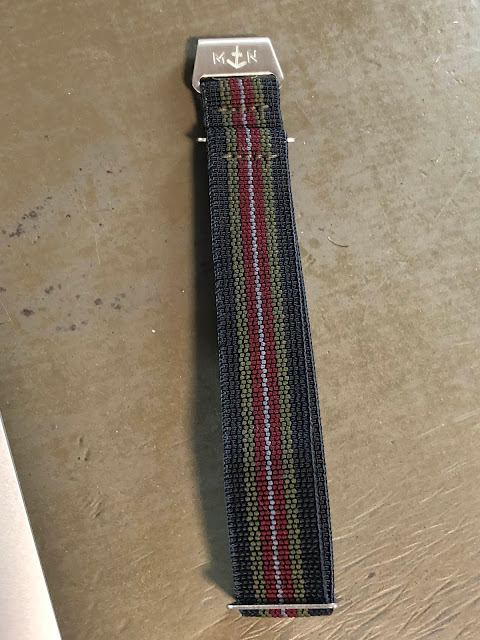 And Erika herself delivered it to me in Basel! 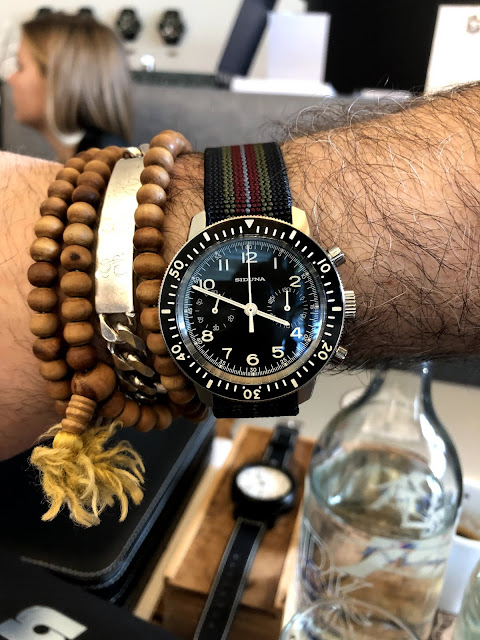 It gave a fun bit of twist to an already super-dope watch! 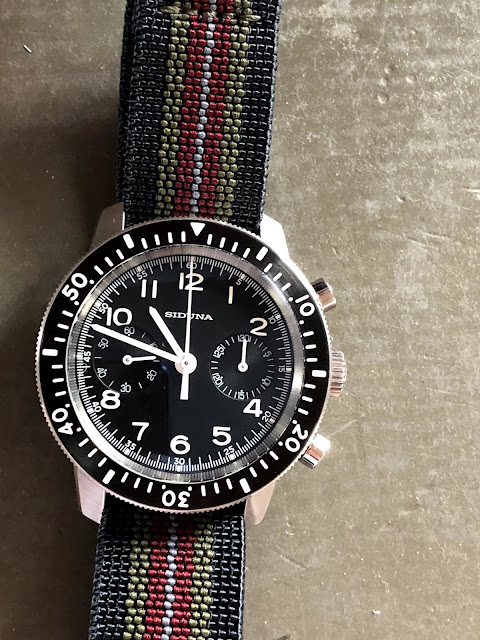 And for those of you unfamiliar, the straps made by Erika's Originals are The Shit That Killed Elvis!  Yes, they are that good.  Throw away your shitty old NATOs and get ahold of the real thing!

Back to the M3440, here are the pertinents, direct from Siduna -

The M3440 is also available in a Flyback version, the one I wore and reviewed is the standard.  Both are extremely well priced, with the Compax priced at € 1,480 without VAT.  It gets a very solid two thumbs up from this reviewer, without a doubt one of the best automatic chronographs I have worn in some time.
Posted by James at 11:01 AM