The One that Got Away - Until Now! 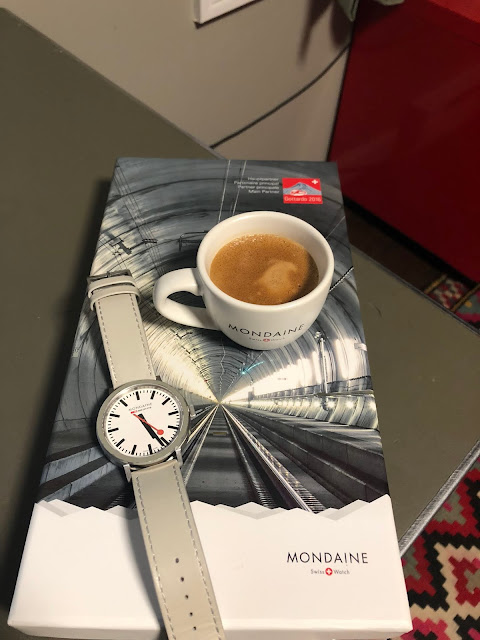 This is the Gottardo 2016.  You might remember it from such blog posts as:

I was lucky enough to stumble onto one of these not too long ago and was very grateful for the opportunity to pick it up. 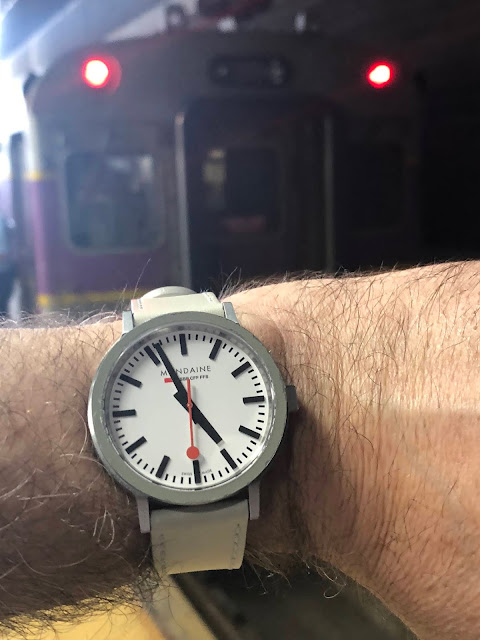 This particular model was released a few years back, the bezel featuring a unique twist.  Here is part of what I wrote at the time of the release -


It is the stop2go series so you have the clever hesitation by the second hand when it reaches 12.  But what I find draws me beyond that (which admittedly might turn some people off) is the bezel.  It is  crafted from the driver’s cab door of an Ae6/6.  I realize that not everyone is into train spotting, so here is a breakdown of the Ae6/6 courtesy of the good folks at Wikipedia -

The Ae 6/6 is a heavy electric locomotive used by the SBB-CFF-FFS. It is sometimes also referred to as canton locomotive ("Kantonslokomotive"), because the first 25 locomotives were named after the cantons, and carried the canton's coat of arms on the side and chrome embellishments (a single raised stripe on each side and three raised stripes on each end), and the Swiss coat of arms on the front, between the chrome stripes. These adornments made them internationally famous. The other 95 locomotives received the names of capital cities of Swiss cantons, and other towns and cities, but without the chrome embellishments. The namings were held as ceremonies in the respective cities.
Originally designed for heavy services on the Gotthard route, as many Swiss locomotives were, the Ae 6/6 was one of the classic Gotthard locomotives.
All locomotives were originally painted in the SBB CFF FFS green livery, with the number, and either SBB CFF, or SBB FFS on each side, all raised numerals in chrome. Nowadays about half are painted red, and a proportion of the fleet have been repainted in SBB Cargo livery, with all raised chrome embellishments removed apart from the Swiss coat of arms on each end. These locomotives have been renumbered (as class 610) in line with the current Swiss numbering scheme
And Hence, the bezel is green. 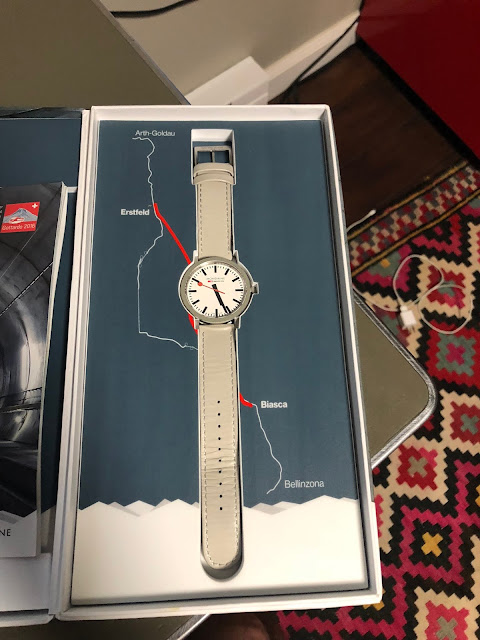 I go to Switzerland a fair bit.  I ride the rails and I see the Mondaine clocks.  But interesting to relate, if you go to Boston's Logan airport, you will find (at least one) Mondaine clock there too!  So for me it's a bit of "bringing it all back home".

The deeper you dive into any interest or hobby, it is inevitable that eventually you will stop going by what your friends (both real and virtual) tell you to like, and start listening to yourself, and following your own lead.  The Stop2Go collection is something that I really, really enjoy.  They are fun to look at, yet still sorta' serious.  And I find myself hoping to be glancing down at the dial just at the right moment to watch the second hand gently slide upwards before pausing just before 12 o'clock so that the minute hand can jump forward.  Is it a highly complex, prohibitively costly mechanical mechanism?  Nope!  And thank goodness!  This is a fun, everyday watch that you can (and should) wear and enjoy.