Beyond a Jacket - Rowing Blazers and Their Founder Jack Carlson

Okay, a few weeks back I had the opportunity to check out the Rowing Blazers pop-up when they came to Boston.  If the full truth be known, I went find a blazer.  As Rowing Blazers is an online company, I was a wee-bit uncertain as to how the fit, feel and finish might be.  Needless to say, I left with my marker placed on my next clothing purchase! 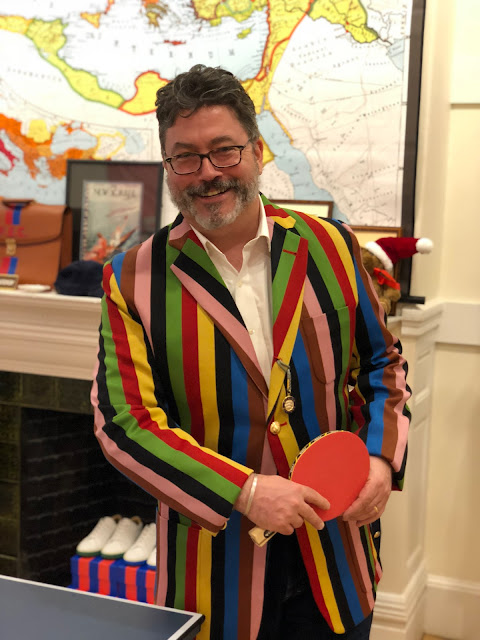 And as fate would have it, I was able to squeeze in a game of ping-pong between fittings ; )

But what I came to find out is that Rowing Blazers is more than just a clothing start-up.  And I had the opportunity to learn more about the back story of the brand as well as the people behind it. 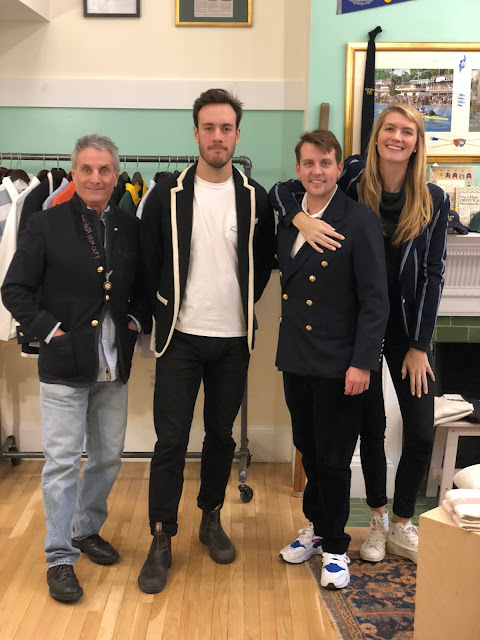 What becomes clear is that this is a team effort, and it is a team that is warm, engaging, and kind enough to find a jacket to fit my favorite watch writer's less-than-Adonis like dimensions. 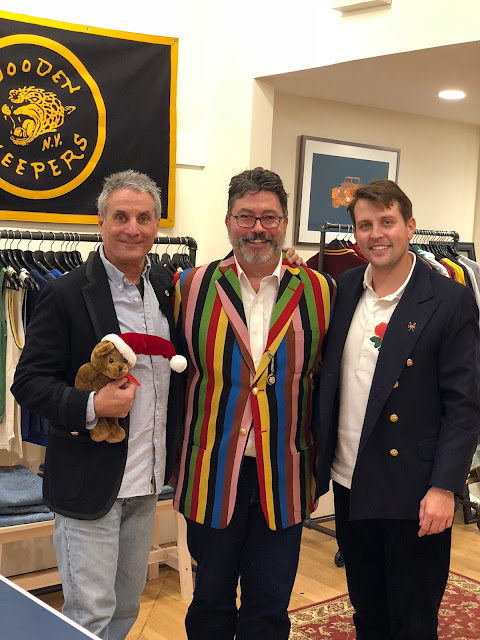 But what I also found was a really interesting story about a guy who also went to grad school in the UK (okay, granted, I went to Surrey, Mr. Carlson went to Oxford...), who has followed his passions (archeology, rowing and fashion), and who is devoted to helping people in need through charitable works.  And I thought to myself, this would make a pretty good interview!  I mean, how often do you meet a guy who was a world class rower, has a doctorate in archeology from Oxford, and launched a successful clothing brand?

And so now, a few minutes with (Doctor) Jack Carlson - 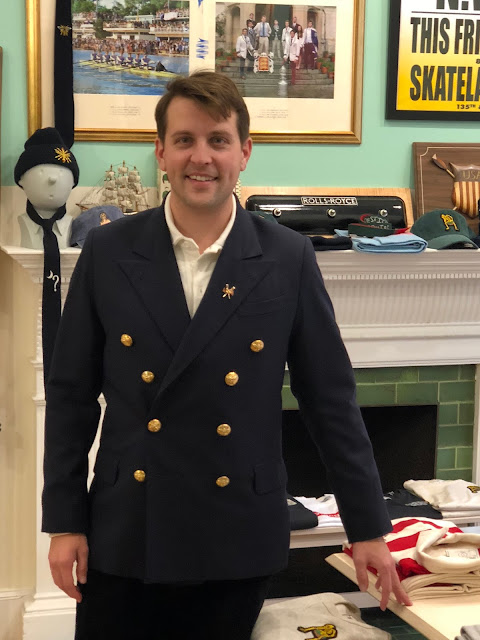 Tempus Fugit - How did you get started rowing?

Jack Carlson - I grew up playing little league baseball.  But in 7th grade, I went to a new school on the banks of the Charles River in Cambridge, Massachusetts.  All my friends went out for rowing, and the rowing coach - my math teacher -- persuaded me to try coxing.  (The coxswain is the member of the crew that makes the calls and steers).  He told me he thought I'd be a perfect coxswain.  He made it sound like a good thing; only later did I realize this meant he thought I was short and loud.


TF - Has it always been rowing, or were there other sports that vied for your interest?

JC - Well, I loved baseball growing up, and I've also always loved tennis.  In high school, I switched over to tennis a few times, but was always convinced by friends and coaches to come back to rowing.

TF -  Rowing, and crew in particular have a reputation for being for rich kids, but in leafing through your book, Rowing Blazers, I was fascinated to see some of the (to me at least) unlikely locations for impassioned rowing.  Is rowing becoming a more mainstream activity?

JC - Rowing is becoming a more mainstream sport, and I think it's very important that it shed the connotation of being a sport only for boarding-school types.  My girlfriend Keziah and I are involved in a organization called Row New York.

It's a rowing and academic program for kids in New York City - especially under-resourced communities in the city.  It's an extremely competitive program; last year, a number of their crews qualified for the Youth National Championship, which is a tremendous achievement.  Socioeconomically and ethnically, Row New York looks different from what you might imagine when you just think of a rowing team, and I think that's important.

TF -  How did rowing inform your education as a high school, university and graduate student?

JC - Rowing was a big part of my student experience, and I learned at least as much from rowing as I did in any of my classes.

TF -  What three words come to your mind when you think about rowing?


TF - Was fashion always an interest, or was the writing and publication of your book (Rowing Blazers) the catalyst to get involved?

JC - I was always interested in menswear.  I read Alan Flusser's Dressing The Man when I was a kid.  That had a lasting impact on me.  The book project Rowing Blazers brought together a number of my interests: menswear, the sport of rowing, and heraldry -- the study of coats of arms, badges, symbols, livery colors and the like.

TF - My understanding is that you have a fairly impressive collection of rowing blazers.  Apart from your own (i.e. earned through your personal membership in crews and rowing clubs), what are some of your favorites?

JC - I accumulated quite a collection while working on my book.  I have a great Oriel College blazer from the 1930s.  It must have belonged to a cox, because it is absolutely tiny.  It also has a lot of meaning to me, because I was the coach at Oriel for two years. One of my favorite blazers that I write about in my book - though I don’t have one myself - is the Hampton School Curtains Blazer. It’s a blazer given to rowers at Hampton who have won “the triple” in a single year: the Schools Head, the National Schools Regatta, and the Princess Elizabeth Cup at Henley. It’s made from curtains cut from the school’s dining hall.

TF -  Approximately how many blazers do you have in your collection?

JC - I have about fifteen or twenty that are mine personally - that I’m entitled to wear.  I have about twenty other vintage blazers I’ve collected over the years.

TF - About watches, what is your go-to timekeeper?


JC - I like traditional dive watches. Most days I wear a Rolex no-date sub from the mid-80s on a NATO strap or a Seiko with a Pepsi dial on a bracelet from the same period.

TF - What was your first watch?  Was it a gift?  Is there a story behind it?

JC - It was actually a Ralph Lauren sporting chrono with a Jaeger LeCoultre movement. It was a gift when I finished my masters degree at Oxford. My dad gave it to me at Henley.

TF - What do you look for in a watch?

TF - What watches/brands interest you the most?

TF - For the serious rower, is a watch an essential tool, or an affectation?

JC - Well time management is very important for every rower, but the really functional thing for an oarsman, spectator or coach is a stroke rate watch; a watch to tell how many strokes per minute a crew or sculler is taking.  Seiko makes a modern digital version; Heuer made a old mechanical version earlier in the 20th century that I’d love to recreate.

JC - Well, rowing is a much more prominent sport in Britain. The World Championships, World Cups, Oxford-Cambridge races and Henley Royal Regatta are all televised. People who’ve never tried the sport know the big names on the British national squad. At Oxford, being on the rowing team makes you a big name on campus. In the US, it’s different. The sport is made to seem much more “niche.” It’s the football or basketball players who are the big names on campus. And while the US embraces successful athletes in less traditional “TV” sports, there’s no rowing equivalent to Michael Phelps or Tony Hawk. Rowing just has a more amateur feel here in the US.

TF - Rowing Blazers as a brand is a very unique concept.  Did you ever have any doubts about it's potential success?

JC - I have doubts everyday, and I have moments of celebration everyday. In the end, the idea is to create a brand that’s true and meaningful. It’s not expected; it’s not just a “preppy” brand. There’s real meaning to everything we do. We make our blazers in New York City, because working one-on-one with the people sewing them is important to me. Our blazers don’t have vents and the pockets are stitched on a certain way. Why? Because that’s how the original rowing blazers were made. There’s a reason why there’s a faucet motif on our tie (it has to do with an extinct, esoteric club at Oxford). There’s a story behind the Latin proverbs cross-stitched on the underside of our jacket lapels.  The sense of story and meaning resonates with people, and that's where it all pays off.

TF - What does Rowing Blazers have in store for us over the next few years?


JC - Rowing Blazers will continue to grow while staying focused on its core: the best, most traditionally-made blazers, Oxfords, rugbies, and accessories.

TF - What advice do you have for the next Jack Carlson out there?

JC - My advice to any kid looking to do something creative is to stick with it.  I think it would be easy to get pulled off the creative path, and it's not an easy road.  So stick with it.
Posted by James at 4:21 PM