Once Again - A Few Minutes With Peter Speake-Marin

This originally went out back in 2011, but given this weekend's news, it seemed appropriate to re-heat it -

A Few Minutes with Peter Speake-Marin 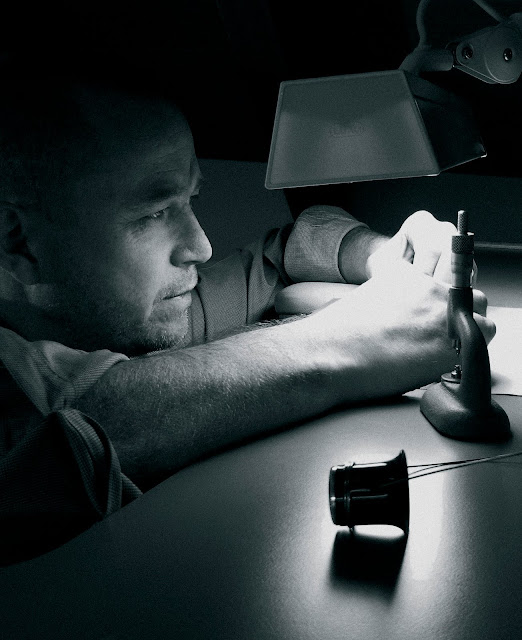 James  Henderson -   What was your first watch – is there a the story behind it?


Peter Speake-Marin - My first watch was a “Steve Austin Bionic Man” watch, back in the seventies with an led push button display.  I can’t say this fired my desire to become a watchmaker but it will always hold a place in my heart.  If I remember correctly, my Uncle bought a small quantity of them from a dubious source and then proceeded to given them away to the children in the area. The first ‘real’ watch I owned was a Longines military watch from 1948 that I acquired in London, when I was working in the Piccadilly arcade.  I then (probably very wrongly) opened the case back up to view the movement, and redesigned the dial in a slightly more gothic fashion. I wore that watch religiously for around 5 years before giving it to a friend who had always coveted it.  He continues to wear it today. He now lives and works for Apple in California.


PSM - Initially as a child, perhaps a bus driver like my father.  Following that I never had a clear view except that it had to be what I perceived to be practical and creative.  As an adolescent I had aspirations of going into architectural engineering.

JH -  It seems fair to say that perhaps you were an "accidental watch maker"?  Your first interest was jewelry, yes?


PSM - I left school half way through my A levels and initially tried for the engineering division of the RAF.  I was under-qualified for this, and began searching for something else, which I thought would suit my skill set.  Jewelry seemed to fit, however the lack of a foundation degree in art meant I was immediately rejected from this avenue. A careers teacher in Loughton Essex dug up an old prospectus on Horology (a word that at 17 years of age I had no understanding of).  After my first visit to the school in Hackney I started the course 2 weeks after it had begun. At 17 I found something that I was good at and held the promise of travel. My Brother and Father had traveled extensively and I had always wanted to do the same. I was told that watchmaking meant that I could find work in any city in the world.

JH - Are you more artistic, or more mechanical?


PSM - Both sides of my brain are fairly balanced which is a strength and enables me to advance projects very quickly, designing things which both are beautiful and work and can be made.

J H -  There is a real history of notably famous English watchmakers - Graham, Harrison, and others.  Do you see yourself ever returning to the UK to set-up shop there?

PSM - Some times I play with the idea but it is already very complex producing the components I design in Switzerland, where I currently live and work. Switzerland is highly specialized in this domain. To make these types of components in the UK would be difficult. Returning to the UK to live for periods of time is a strong possibility, to set up a company making the type of watches I make today virtually impossible.

JH -  Who else is making watches that interest you?

PSM - Nobody specifically but I am drawn to the independent world more than the larger companies because these guys feel far more authentic to me in their motivation.

JH - If you weren't doing this, what would you be doing?

JH -  Living and working in Switzerland - did you have any challenges/difficulties adapting culturally? How about with the language?

PSM - Language was the toughest element, I am not a natural linguist and although I work like a dog I am lazy at those things which I need but don’t really appreciate, French is one of them.


JH - I have to say, I love the Marin-1 with your SM2 self-winding movement.  How long did it take for you to develop this new caliber?

JH - Any future SM calibers in the future?


JH -   You seem to spend a lot of time "on the road" meeting your customers and fans - has it always been this way?

PSM - I spend less time than people perceive traveling, but when I do travel I try to make as much noise as possible since this is my way of reminding people that I am there and about my work. Like many independents I spend my cash on the watches and not marketing.  As a result the traveling becomes my marketing and as I meet my clients and visit different countries I share the experience on the Internet. It has not always been this way but will increase over the next 2 years as my business grows until a point comes when I can be more conventional in marketing my work. This does allow me to live a childhood dream of travel.  In September I leave for a world tour which will be for at least a month.

PSM - Max has been a friend for many years and I am happy to have been able to help him start his business as he helped me and many other independents when he was with Harry Winston.

JH - It seems that you might have come into watchmaking at just about the right time with the renaissance of mechanical time pieces following the quartz crisis. What are some of the differences you see between when you started out and where things are now?


PSM - Essentially the increased size of the collectors market and education through social media, had the Internet not existed I doubt I would have been able to have the success I have had today.

JH - Where do you see Peter Speake-Marin in three years’ time?

PSM - In a different workshop with a larger team in a constant state of development.

JH - Was there ever a time when you asked yourself - "what was I thinking?"

PSM - Every other day

JH - Going out on your own was a big decision. Any regrets?


JH -  Finally, any advice to the future aspiring watchmakers/entrepreneurs out there?


PSM - Create a real business plan which will help you to plan every element of your business and work, and assure your self a financial cushion.  Believe actions and results not words.