If I am honest, last year's BaselWorld was a bit of a snoozer for me.  There wasn't too much that really jumped at me, at least not as much as in past editions.

This year is already off to a promising start.  Some intriguing offerings from Patek, Manufacture Royale and some other interesting bits and bobs to be covered in more detail shortly.

But what really reached out, grabbed me by the scruff of the neck and shook me yesterday (yes, that is a good thing) was the new chronograph from Tudor - 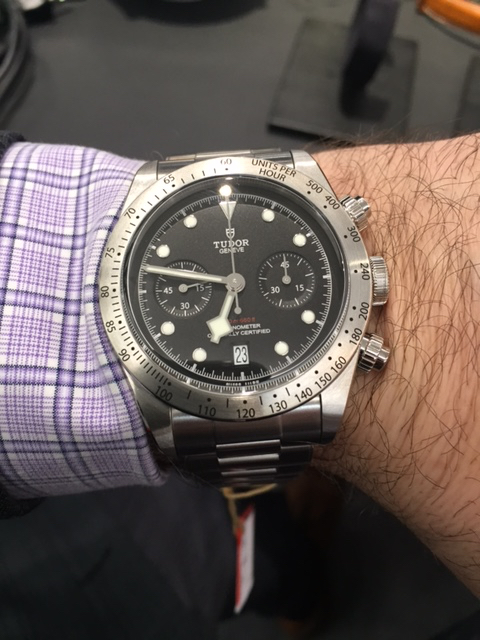 It is offered on both a bracelet (above), and a leather strap (below).

The case measures in at a very reasonable 41 mm in diameter.  It is stainless with an engraved fixed bezel (tachymeter).   The pushers are screw down to help ensure water resistance to an advertised depth of 200 meters, so your Tudor Black Bay Chrono will thrive in the briny deep.

The movement is Tudor's Manufacture chronograph Calibre MT5813.  And brace yourself sports fans, this one did not swim out directly from Tudor/Rolex's gene pool.  The folks at a certain brand more famous for the color yellow than red or green were collaborating partners in this creation.

In their own words, here is how Tudor describes it -
...70-hour power reserve, a silicon balance spring and certification by the Swiss Official Chronometer Testing Institute, the Manufacture chronograph Calibre MT5813 that drives the Heritage Black Bay Chrono model is a high-performance movement. Crafted in the purest watchmaking tradition, it features a column wheel mechanism and vertical clutch. In keeping with the TUDOR philosophy of quality, it presents extraordinary robustness and reliability, guaranteed by an array of extreme tests applied to all TUDOR products.

Which then begs the question, is this the watch world equivalent of Sadie Hawkins Day?
https://en.wikipedia.org/wiki/Sadie_Hawkins_Day

It has been documented here and elsewhere that Breitling might be looking to be "asked out" and maybe this is the first step in a future courtship.  We will wait, and we will see.

Now the other thing that I really liked (and proof positive that I was clearly asleep at the switch last year, was Tudor's use of a riveted style bracelet.  And because Tempus Fugit is famous for its high level of photography (I will pause for a moment while you die laughing), here is a shot to illustrate - 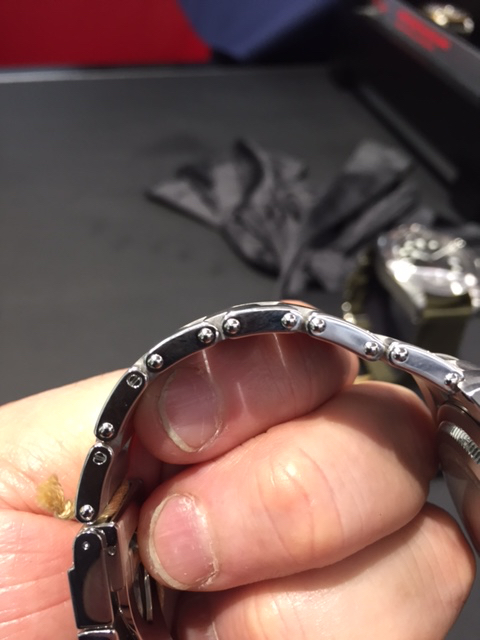 It is essentially a pin and collar type bracelet, so the rivet is ore of an aesthetic touch that hearkens back to times gone by.  But it is one that I like!

Now, believe it or not gentle readers, there was a Tudor that was even cooler (at least in my opinion) than this one, and it's coming shortly so stay tuned, but for now I have to say that Tudor did not disappoint this year!

Here are the pertinents, straight from the source -