The Shit That Killed Elvis - Is Now Connected!

As I said in my initial report about Kronaby, I am generally not one to gush.  And just as I was not what could be called a "convert" in any way shape or form to the church of connected time keeping, I think I might finally have seen a watch that looks good, and actually does some things that I would actually enjoy and appreciate.
And yes, in fairness, I was one of a small number of people (and one of an even smaller number of watch writers) who got to see the new Kronaby waches in person, but I can honestly say that even without the "brains" under the hood, they are beautiful simply as watches.

And we all had favorites.  I was seated with some guys from a French sport/interest magazine, and along with conversations about FIFA, Michel Platini, the French heroes of 82 & 86, and Bernard Hinault we talked a bit about watches.  And interesting to relate that two of these guys also wrote a lot about watches and they both had their personal favorites.  But I feel that is a story for them to share with their readers.  As for me? 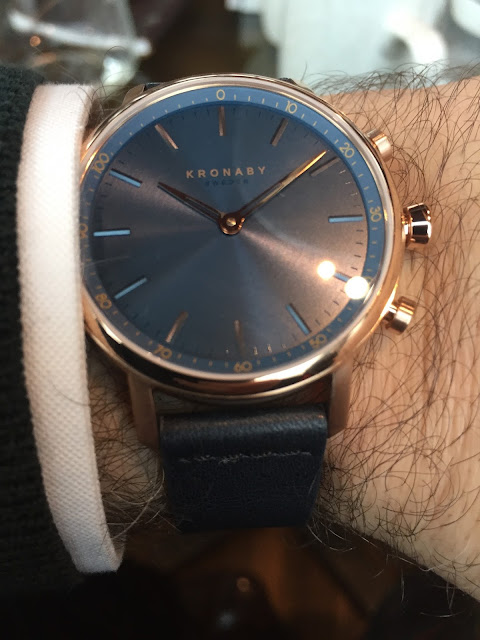 At 36 mm the Kronaby Carat is plenty big enough.  But visually, the combination of the blue-grey dial with the gold pvd?  It ticks all of the boxes.

It has all of the functionality of the other models, but it is assuredly a "less is more" feeling.  And priced at 395 Euros ($420 US), I personally feel that this is the right connected watch, in the right place at the right time.

I did get to see several demos of the Kronaby watches, but to be clear I have not worn one for more than a moment or two, so the final proof will be if/when I get to do a review.  But I can say that based on what I have seen I think this is going to be the new standard by which all connected watches will be measured from here on out.

Battery
Battery Life up to two years (depending on use), CR3032 coin cell

App
Kronaby App working with (or later version) Android 5.0 and iOS 9
Posted by James at 5:36 AM