A Few Minutes with Sarandis Kalogeropulos

Tempus Fugit - Okay, I have a "standard format" that I usually work with, but in fairness you are not the "standard" type of watch brand head.  So we're going to mix it up a bit.

TF -  You come from a completely different industry background.  What made you decide to get involved with watches?

SK - It was a collective decision that four of us made together.  We saw that there was a digital transition that was happening.  Watches were becoming digital.  But we didn't feel that they had truly become digital, at least not in terms of harnessing all of the possibilities.  So the question for us was. how can we make a watch digital in a way that offers something truly unique, of value, and desirable?
TF - So again, you are not from the watch world (at least in terms of professional background). You and a lot of your team came from the mobile phone field, correct?

SK - Yes, many of us did come from the mobile phone industry, and we felt that as so many phone features were possible using the same hardware (the smart phone itself) why couldn't we make a connected watch using the same principle.  When you update or add apps to your phone, you don't have to take the phone to the shop and change the hardware.  Why shouldn't a connected watch be the same?

TF - And this was the "trigger" to step away from the mobile business and enter the connected watch market?

SK - It's important to say that I loved the mobile business, but phones had started to become a commodity, and not necessarily in a good way.  Connected watches offered something different, so at Kronaby we wanted to see an evolution of this ongoing shift in the watch industry.  We felt that the industry had tried (but not yet succeeded) in offering a truly connected watch, and based on this we decided to jump in.  So let's say that was the logical side of the decision.  The emotional side was a love of watches.  Myself and my colleagues felt an emotional tie to watches.  And so the die was cast.  We started with 20 - 30 people in September 2015.  And now a year later we are ready to introduce the world to our baby.

TF - So tell us a little bit about you.

SK - My parents are from Greece, and they came here when I was young.  For the most part I was brought up here in Sweden.  When I was still very young we went back to Greece, as a lot of Greek Swedes have also done, but my family returned pretty quickly.  Sweden was sort of the "land of opportunity for my family.  In many ways it has truly offered the best of both worlds for my family, and many families like mine.  This is something that people don't realize about Sweden, it is a place where you really can have a chance to make a new start, and pursue your dreams.

TF - Where did you grow up?

SK - I grew up in Landskrona, which is near Malmo.

SK - Believe it or not, I wanted to be an engineer.  Even as a young boy, that was it.  Not a fireman, or footballer, but an engineer.  I was somewhat obsessed with creating technology, and new things.  A very early project involved trying to make an improved bicycle horn with my cousin.

TF - Well, please don't take this the wrong way, but you seem more like a marketing / sales guy.  You are far more outgoing than the stereotypical engineer.

SK - Well, believe it or not I was very shy as a kid.  From an early age I wore thick glasses, and as I said, I was shy.  You know, kids are famous for being kind and friendly to other kids? (laughing)

But then I went from wearing glasses to contacts and things changed!  Almost like Clark Kent becoming Superman by taking off his glasses.  It really changed my life.

TF - What did you study?

SK - I studied electrical engineering for 2 years.  After that I studied physics, then nuclear physics.

SK - Well, not exactly!  In the end I decided that I wanted to move away from academia, and I went to work at Ericcson (later Sony Ericcson) as a battery engineer in 1998.  And I did pretty well there.  After 3 years I was offered a manager's job, but I really wanted to be a specialist.  Then after 2 years, 2 managers left and I became a manager of the battery group.

But a big turning point for me was when I was sent to the US to help implement part of Ericcson's battery design and manufacturing there.  And I was not sent to Silicon Valley!  No, it was North Carolina.  And I discovered something pretty amazing and different about how people really communicate.  I assumed that people would ask about you more as a courtesy, but the people I met were really interested in learning about me, and I became interested in learning about them.  It really changed the way I viewed not only other people but myself.

SK - I think an easy way to answer that is to explain how the name would translate into English.  What does Kronaby mean?  It is a combination of two words -
Krona is Swedish for crown, and By means village.  A great deal of what drove our entry into the connected watch market was the belief that everyone in their heart has a "personal village" where time almost stops.  People love fishing, sports, painting - i.e. a moment where you are in your own personal place.  And while you are in your own space, you still want to be somewhat connected.  In other words, you are in control of how connected you wish to be.  Kronaby offers that type of personal connection.

TF - So what is Anima's role in all of this?

SK - We started with Anima - 2015 was the starting point.  We felt that we wanted to have a watch brand.  This started in December/January of 2016.  Anima is at its heart a technology company.

More than just technology, Anima has taken pains to have a diverse team.  We can handle around 20 different languages right here in our office!   Along with communication, customer service is very important.  We therefore decided to hire customer service people BEFORE the product launch.

TF - Okay, onto the question that both customers and possible retailers will want answered - what kind of retailer do you see Kronaby in?

SK - We are not selling gadgets, not mere products.  We want to sell something with soul and heart.  So for us it is not all about numbers.  Owing to this, we feel that there will probably be two streams - watch stores and lifestyle retail stores.  But we do not feel that so-called consumer retail stores like Best Buys or mobile phone stores are where we should be either.  This is not mere merchandise.  With Kronaby, we feel that the retail partner is really selling something that is an expression about this "personal village" that I spoke about earlier.  That takes something more.  It takes passionate people who value and appreciate their connection with their customers.  I like when a store can take the time to explain and really make it personal.  Some stores have too many choices, too many options.  And ultimately, a store is just a store.  It is the people working in the store that really make things happen.  In this sense, these people are more important than the store itself.

In addition, we will also be available through our own online shop, which we intend to staff with real human beings to ensure clear communication and support!

TF - What are the biggest challenges facing Kronaby?

SK - How are we going to penetrate the global market?  How will people hear about us?  How can we communicate Kronaby in a meaningful way that people will remember?  I believe in our people, our product and our message.  We are a Swedish company, but not for Swedes only.  We are a Swedish Company in a Global Context.

TF - What are Kronaby's opportunities?

SK - Kronaby's opportunities are closely related to Anima's opportunities.  Our firm belief is that more and more there will be increasing digitization in our daily lives, but our goal is to offer that digitization in a way that improves your life.  And improving your life does not mean radically changing it.  In other words, the product should adapt to you, not the other way around.

TF - Well, since were talking out life and how we live it, what do you like to do in your free time?

SK - More than anything I like to be with people.  I am a big "social networker", but not only in the digital space.  I truly enjoy spending time with my family.  I love reading linkedin articles, and other short, quick articles.  My personal life is really a "social network", with people constantly coming around, a house filled with friends and family.  I think you could say that is part of my "Greek DNA". 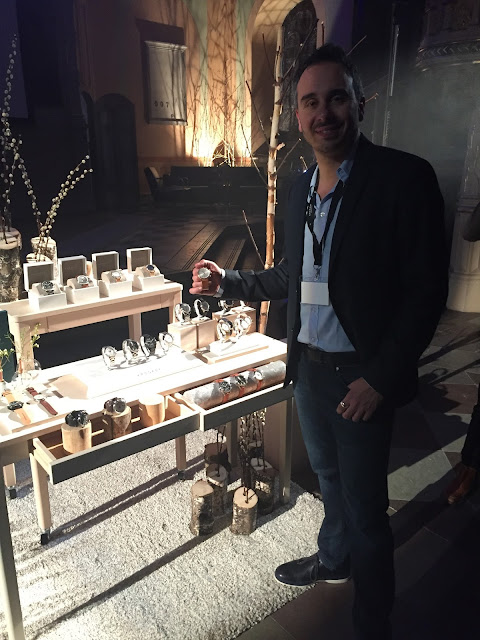 TF - What advice to you have for the next Saranids Kalogeropulos out there?
SK -  Be yourself, do what you believe in and always be nice. The more gentle you are the better it is.