I will be 100% honest, I do not go to a lot of watch events and get togethers outside of BaselWorld and the (very) occasional JCK show.  But these past 3 weeks have seen me hop on planes to attend 2 different get togethers and shows that were meant to promote small and independent brands.  Now at both of these shows there were mostly small and independent brands, but I noticed a few interesting counter realities.  A few "bigger kids" had elbowed their way into the playground and pitched their tents taking up valuable space and potential attention from the smaller guys who these shows are really meant to promote.  And for the bigger brands claiming that they are "smaller brands" I would put it this way -

When you have sufficient sales and money to have an HQ, local (or even regional) representation, 2 or more full time employees and you can afford to freight representatives from across the country or even further?  News flash, you are not a micro brand.

But for the smaller guys that were there - brands like Schmutz, Eza, Gavox, Hemel, Hager and others, it was a great opportunity to meet current and (hopefully) future customers.  And it was an unexpected opportunity to take a stroll down memory lane for me. 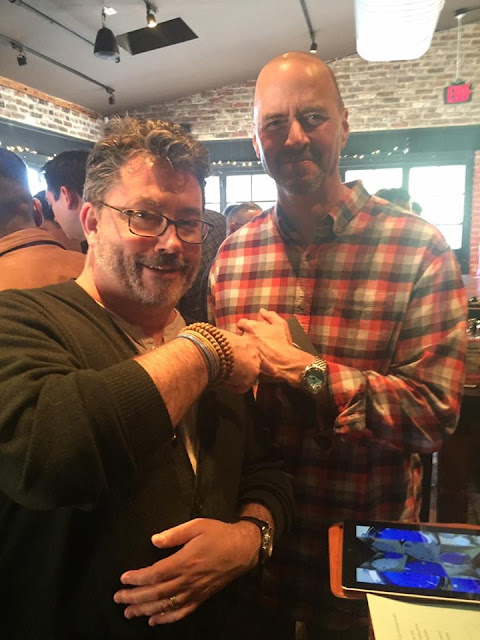 The gentleman on the right is wearing the DOXA SUB Project AWARE (version 2).  It was an interesting moment for me as the original Project AWARE was my first pr / marketing project back in my DOXA days, and now nearly 8 years later, here was the next generation.

And it had been a very interesting time period between the two shows.  A handful of big brands who had been VERY good about sharing media updates had decided that they apparently should be more selective about how they disseminated their news, deciding they would focus on a very big outlet that they already paid advertising fees to promising media blackouts for the rest of us of 1, 2 and in some instances 3 days.  Needless to say, some of us in the Fifth Estate were less-than impressed by the response we received from one PR maven in particular which essentially said - we sent the release first to one outlet first because it is bigger and if you don't like it, you can pound sand.  Well, rather than pound sand, I'll simply move on. 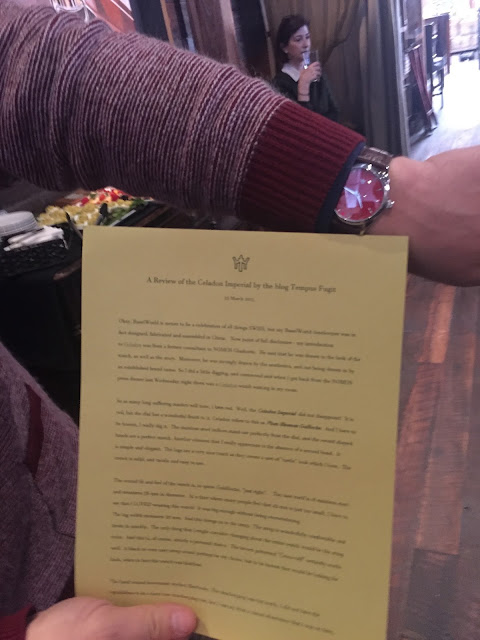 And what should I encounter at the Maison Celadon table but a copy of my own review!  It was sort of a funny moment because the gentleman behind the table asked me if I had ever heard of Tempus Fugit?  I told him that the name rang a bell ; )  He let me know that, in fact, my review had been a strong influence on his original purchase.  So take that Eterna ; )

And here's some interesting data (albeit anecdotal) for the bigger dogs out there.  There were, if I'm honest, some pretty insane volumes of people at these events.  In fairness, the NYC event was in the middle of an upscale food court which guaranteed a fairly large level of foot traffic.  But the one in Alexandria, Virginia was clearly a destination for people to get to, some driving up to 7 hours to be there.  And it really solidified my unshakable belief that this really is a people business.  And actual watches were actually being sold.  So what this further underscores is that at a time where the big brands are hurling money at glitzy events, expensive dinners and celebrity ambassadors and exclusionary press tactics, maybe spend a little time trying to meet your ACTUAL CUSTOMERS.

Who knows, you might actually sell some ACTUAL WATCHES ; )

And by the way, enjoy yours!