Screaming Jesus on a Ferris Wheel! It's Not Getting Better

And the Butcher's Bill is in from the Federation of the Swiss Watch Industry, and the numbers are down again.  So despite Mr. Hayek's assurances that July would be better, it looks like it was not. 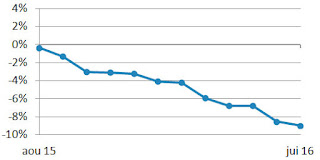 Now, is SWATCH Group the entire industry? Of course not. But they are the canary in the coal mine. And more to the point, it bears mentioning that short of a Lazarus-like recovery, things are not going to improve to the levels that would mitigate the losses already incurred by SWATCH Group and the other big dogs.

Interestingly enough, the US is once again the number one country in terms of volume, representing 10.9% of the total export numbers.  But take that positivity with a healthy serving of salt, because the US numbers are - spoiler alert - down again.  The US drop is 14.5% as is the total for total wrist watch exports.

It bears mentioning that as the books close on July, we are now rapidly approaching the make or break holiday season.  This is usually the time when retailers are replenishing their inventory to prepare for the holiday onslaught.  But if the retailers I have been in touch with are any gauge on this, it is looking like a blue Christmas.