A Grand Day Out - Visiting the Chelsea Clock Company

So the quest for what is actually made here took me a wee bit farther afield today to the new premises of the Chelsea Clock Company in Chelsea, MA. 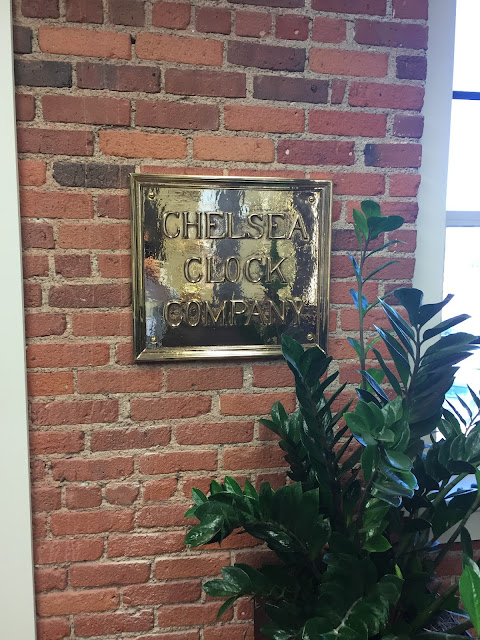 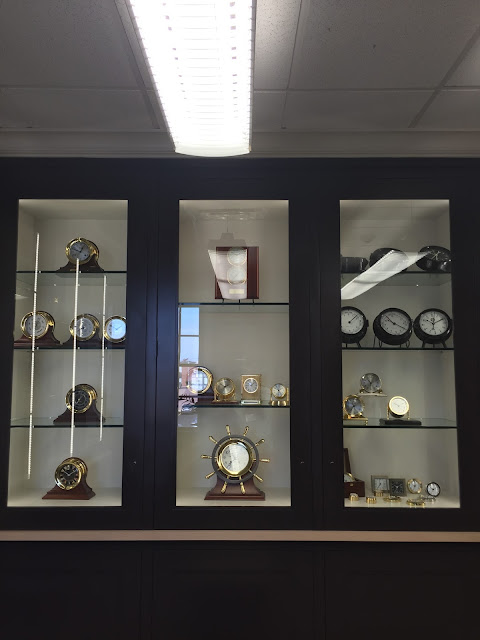 While many lament the recent move to new digs, the facility that now houses the company is a beautifully converted historic building that retains the look of it's former self, while the interior has been painstakingly  remodeled providing a modern work space for both manufacturing and administration. 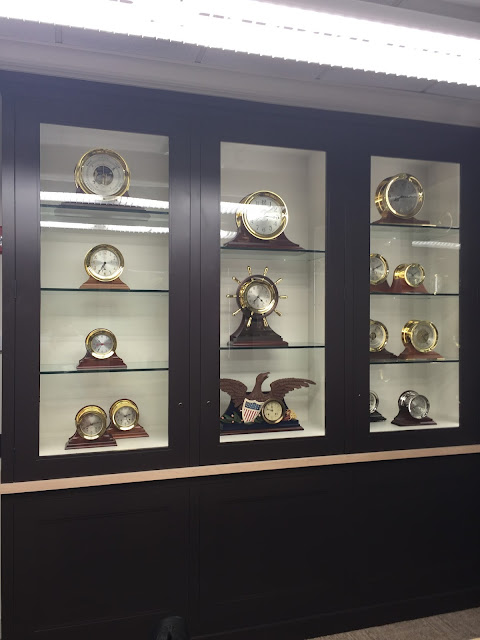 First and foremost, it is important to understand the historical significance of Chelsea Clock and how remarkable it is that they are still making mechanical (and now quartz) clocks in the city they have called home for such a long time. 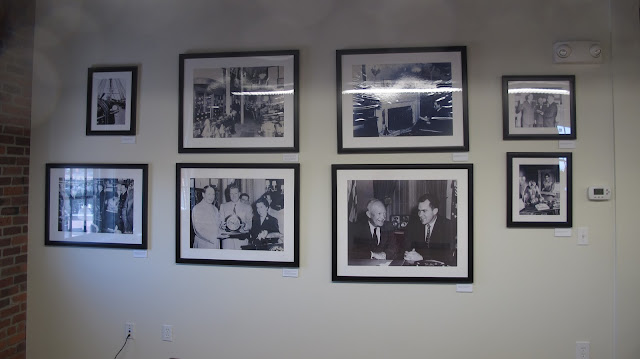 If the Vulcain Cricket could be referred to as the "Watch of the Presidents", then truly the Chelsea Clock is the "Clock of the Presidents".  Previous as well as the current office holder (President Obama) have selected Chelsea clocks as official gifts of state to present to foreign dignitaries. 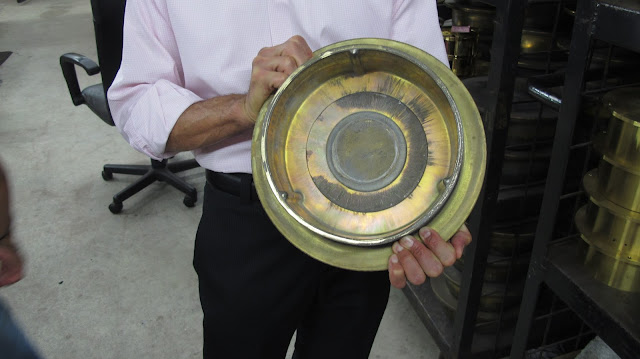 The clocks start out life as a brass blank. Having hoisted one up, I can assure you that they are formidable and weighty. The more finished product comes out looking like this - 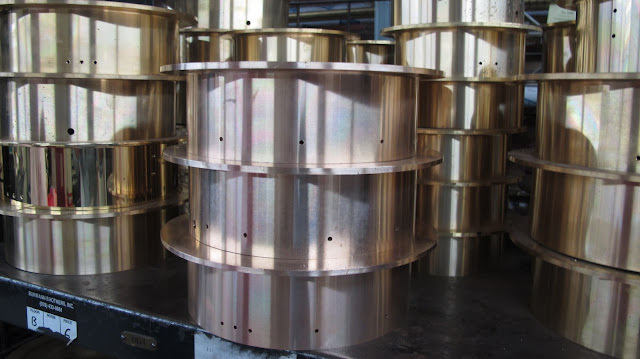 The production and assembly of the clocks themselves take place in the first two floors of the facility. 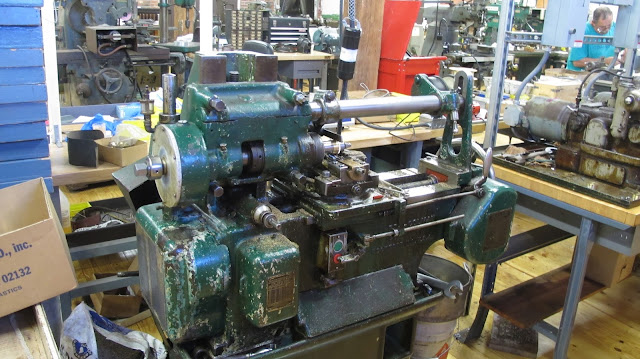 And while the machinery used to craft the clock cases are modern and computer programed, the machines used to fashion the gear wheels, etc. are very much of an earlier time and the parts produced are flawless and timeless. 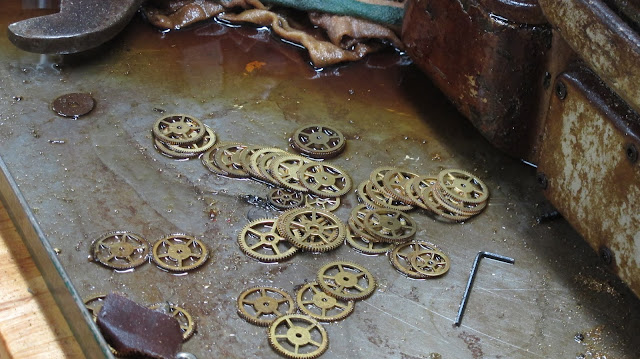 No doubt it would be easier to outsource this to a foreign entity, but that is not how things are done at Chelsea Clock. 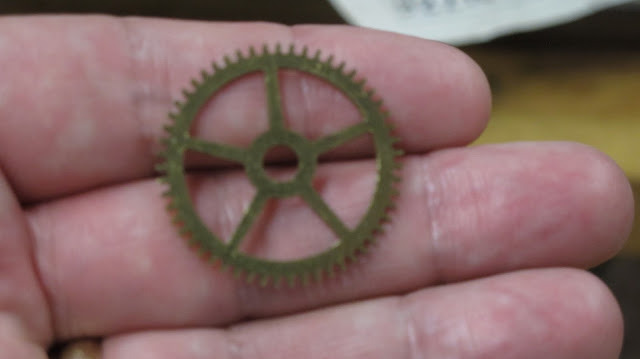 So things are prepared there, but how are they assembled? By hand, the old-fashioned way!

From all of these parts - 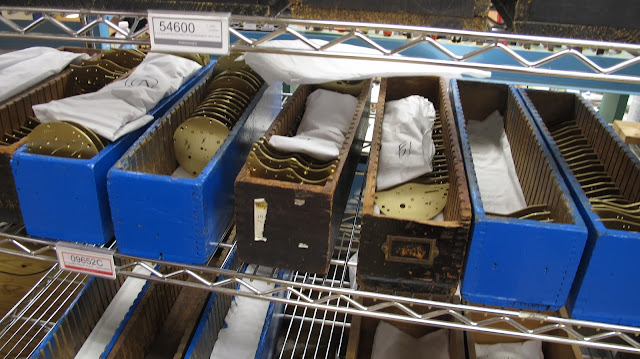 One incredibly skilled artisan creates this - 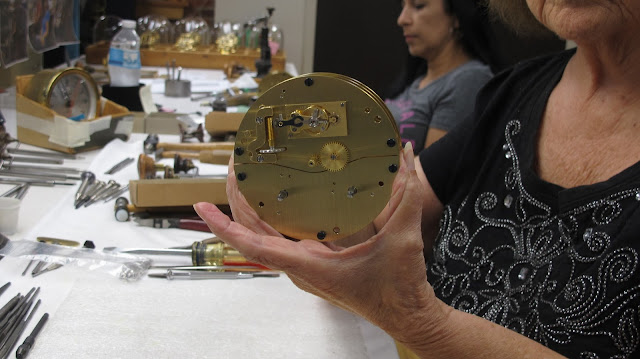 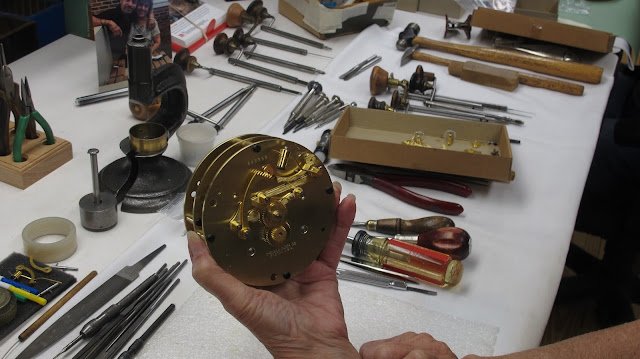 In many ways it is safe to say that each clock has been touched by everyone who has ever worked at Chelsea - and in more than just the obvious, physical manner.  A Chelsea clock is a time machine in the truest sense. 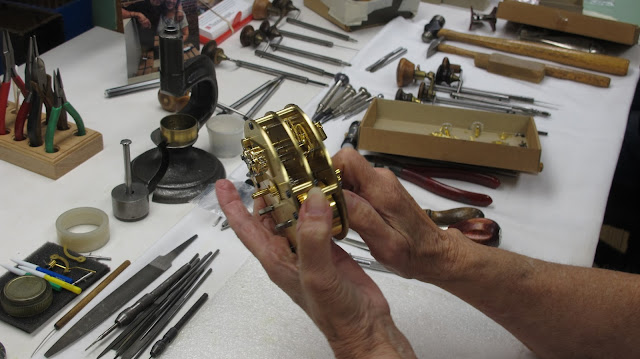 Another interesting point was that Chelsea Clock takes a somewhat "just in time" manufacturing plan.  This ensures that while there might be a small supply of clocks that are ready to go, the production schedule ensures that there will not be a too deep supply of unsold clocks clogging up the supply/distribution chain.  A business model that their Swiss cousins could benefit from.

And having visited several factories in Switzerland, the other thing that I noticed sadly lacking in La Chaux de Fonds and other Swiss locations was the effort to restore and repair older pieces.  Again, something completely different is taking place at Chelsea Clock - 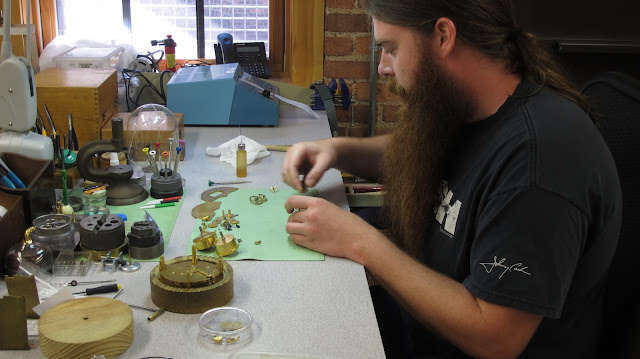 A fairly extensive and capable team work on the repair and reconditioning of Chelsea Clocks - be they ancient, or of more recent vintage. 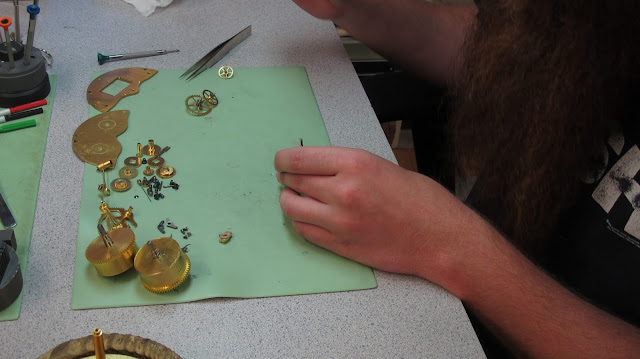 This work is done patiently, carefully and with a pride that is somewhat infectious. 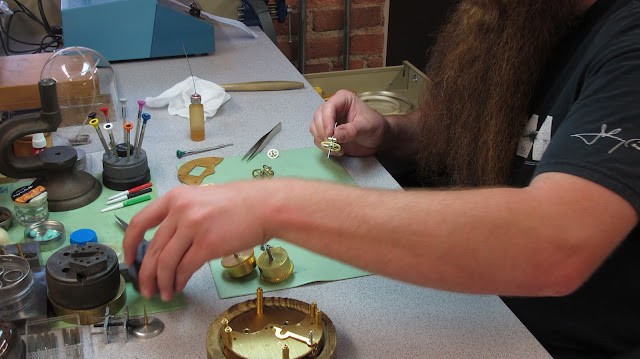 So while we hear a certain watch brand claiming that they are making things from soup to nuts here in the US, but afforded very few specifics, it is nice to know that there is a place where things are actually made, and not just thrown together and over-hyped with a rambunctious publicity grab. History, tradition and continuity, there is a reason why Chelsea Clock has been around as long as they have been, and there is a reason why they continue to attract new, talented and committed team members. 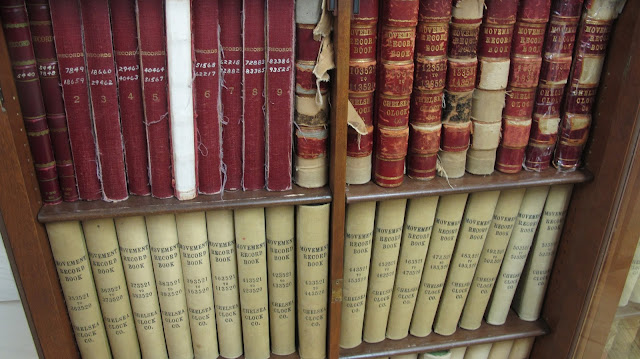 Perhaps more than anything else, I was impressed by the sense of Chelsea Clock as an institution.  Something bigger than any one person or one clock.  But rather a living, breathing, ticking thing that lives on through the many people who have worked there and the even greater number of Chelsea Clock owners.  And the history is recorded and maintained.  From the earliest beginnings which were recorded in bound ledgers. 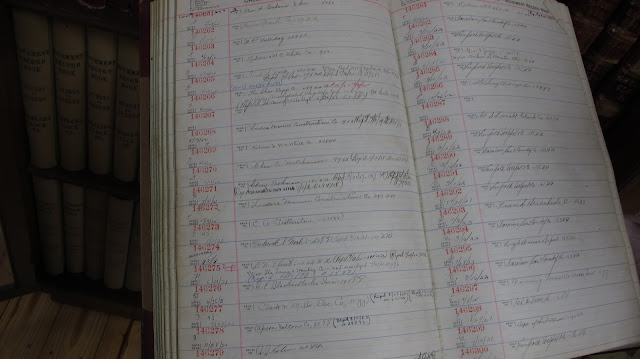 Names and the clocks attached to them. 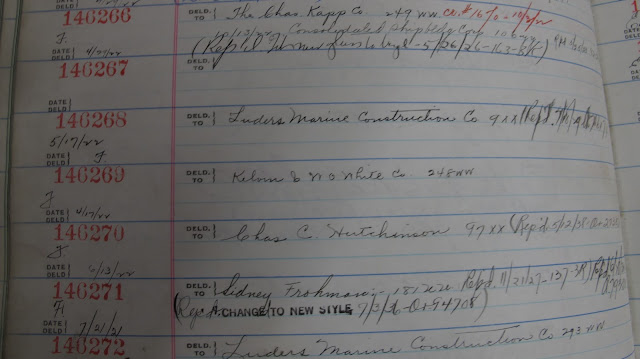 And those names and the relationships are still recorded today, albeit in a more modern, digital manner.

And while they still make historical, mechanical pieces, they have also moved forward with the times, and produce clocks for no less a fashion luminary as Ralph Lauren - 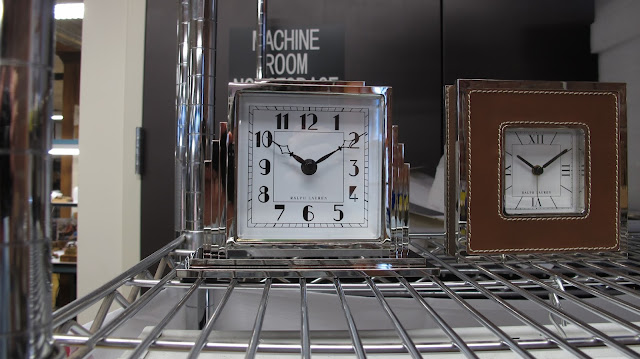 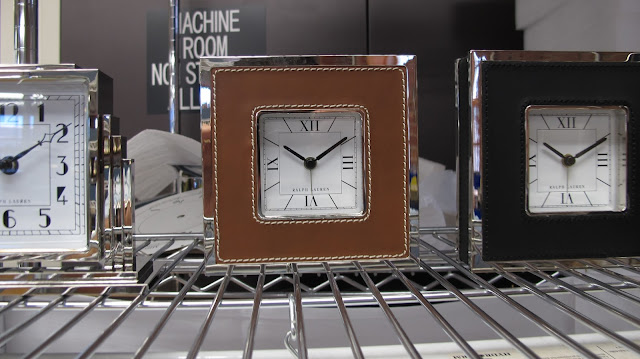 So if you're really looking for something authentic, the good news is that you don't have to travel all the way to Massachusetts to experience it!  Chelsea Clock distributes both through retail and direct.  So do yourself a favor, and grab hold of a real time machine! 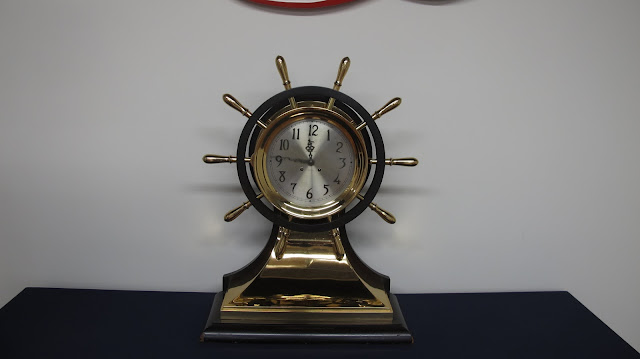 www.chelseaclock.com
Posted by James at 4:49 PM