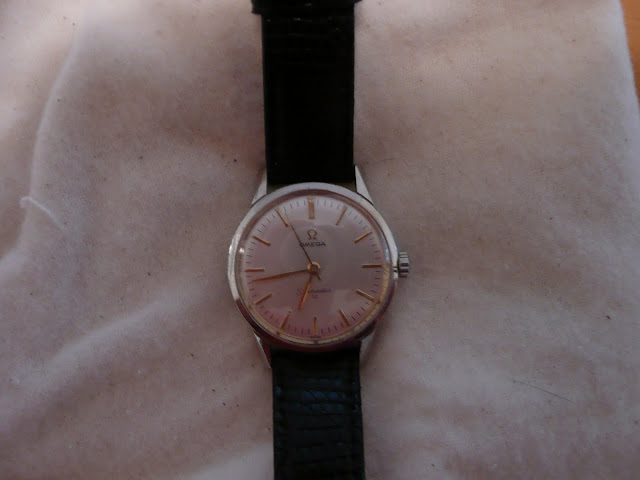 Wendy and I were living and working in Turku, Finland back in the mid 90's. One day I had some time on my hands between classes and went for a walk, ending up in a "thrift/flea market/antique" store. After nosing around something caught my eye half-buried under a heap of Soviet era war ribbons and decorations. The dial was "splotchy" to say the least, having acquired a pattern well beyond patina. The hands were dinged up and the crown was somewhat rough. But it worked! I asked the gentleman how much, and he told me the equivalent in US dollars - about $50.00. Probably my only regret is that I never took a "before" picture.

As an English teacher I was not blessed with a great deal of disposable income, so I went off to teach my class. The next week my wife and I visited the shop and it was still there. Another two weeks went by and I just had to have it - and luckily it was still there - I went to the Merita bank ATM and withdrew the Markka (pre- Euro days), and made my purchase.

This Omega Seamaster is from 1963 - about 5 years older than me - and had been the retirement present for someone named Janne. That spurred what I rather naively imagined as a great research project, a triumphant discovery of the identity of the original owner. Phone books would be consulted and cross-referenced, family members sought out, utility company clerks charmed, whatever it took to get the real identity of the original Janne of 1963 - I would go the distance! Sadly, owing to the limited scope of the Internet at that time, as well as my limited (read 0) ability in the Finnish language, the great Seamaster 30 research project of 1997 came to an screeching halt one Friday evening at the Old Bank one of Turku's re purposed pubs, exactly one week after it started! Over what would become the third of several rather "hoppy" beverages, my erstwhile research partner Raimo had had enough and was throwing in the towel. As I walked him back to the bus station, the folly of my vision became startlingly clear through rather foggy eyes.

I suspect the original Janne has long since left the realm of us who measure time in hours and minutes, and I feel bad that his family had, for whatever reason, decided to part with this watch - this treasure. Ultimately, it is a possession, a thing. It is steel and levers and springs. It is utilitarian - it tells the time. It is not Janne. But for me, the interloper, there is more. This is something that Janne strapped on with pride every day. While this is not him, this is something of him. I can imagine Janne winding it every morning as he looked at the Helsingin Sanomat. A second cup of coffee, and maybe now he's ready to take the dog out for a walk. He probably still talks about talvisota - the Winter War. He might have even known Paavo Nurmi - after all, Turku wasn't such a big town.

Sitting here in Santa Barbara I imagine the two of us having a beer together at the Old Bank, talking about ice hockey, the end of the Cold War and sharing stories about our Seamaster 30. I would proudly show him the restored watch - "Look at this Janne! New hands, crown, crystal - all original from Omega!". He would probably just smile politely and shake his head at my extravagance. "Does it still tell the time?" he'd ask me, and only then would I understand.
Posted by James at 5:00 AM