With the situation in the Swiss watch business getting worse every day, and some of the "fatter" cats still holding on through guile, misdirection, or a particularly large amount of cash, I thought it might be interesting to revisit a brand that had all of the potential to do something amazing, but sadly didn't catch the right breaks at the right time.  Lionel Ladoire offered some unbelievably cool watches that were in demand for a time, and much discussed.  Sadly, Ladoire could not keep going and he has since moved on.  But for a time he was right there on the edge, making exciting things.


So let's revisit this talented guy -

A Few Minutes with Lionel Ladoire 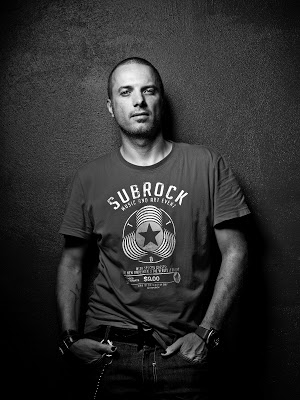 James Henderson - What was your first watch?  Was it a gift?  Is there a story behind it?

Lionel Ladoire - My first watch was a gift.  I received a Casio Vintage Sport when I was 10 years old. There is no special story behind it.

When you were a young boy, what did you want to be when you "grew up"?
LL - I wanted to be everything I am today.

JH - Where did you go to school?  What did you study?

LL - I am a graduate in jewelry of the SEPR in Lyon.  After that, I went to the Ecole Boulle, a major reference in the teaching of art, applied art, design and craft in France.

JH - How did you get your start in the watch industry?
LL - It came naturally as a combination of my early years/family exposure to micro mechanics on the one hand, and to jewelry (my family was also involved in this sector for the last 4 generations) on the other hand. Watchmaking borrows from both.

JH - What was the best part of competing professionally?  Are there any great victories that stand out?
LL - Among all activities that are available to professional snowboarders, I most preferred free riding contests as they are (almost) without rules, while Slalom is much more limited by the rigidity of its own purpose.  Once I won the parallel slalom Championship of France.  But I didn’t feel accomplished. Then I became a professional free rider.

JH - And it seems your interests extend beyond horology and snowboarding - how did you find the time to become such a successful drummer?

LL - My grandparents used to work while listening to music.  And during my learning years next to them I could already see how a working musical atmosphere can contribute to better deliverables, as somehow musicality enhances the creativity.  I started playing the guitar and smoothly moved to drums. I have a strong preference for Rock music.  When I reached 24, I realized that my body was asking me to slow down the snowboarding practice and competition.  I then focused on playing music, and again, mostly drums.  The real thing about being a musician is that I don't encounter any physiological limits - the body has nothing to do with it - with practice, I am still improving.

JH - So what drew you back to watch making?  Was it difficult to make the adjustment after the excitement and adrenaline of being a professional athlete?

LL - You can’t be a professional athlete all your life, and then at 24 I was becoming “old”.  Moreover, I love challenges.  Consequently, I naturally changed my way.  It was not difficult to make the adjustment. High performance sports build character.  If you desire to excel in sports you need perseverance.  To be on top you have to train every day otherwise you will never reach the level you want.  The perseverance I gained by being a professional athlete is an important skill now that I run LADOIRE. 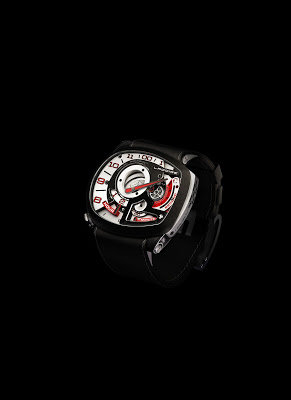 LL - Among the brands having a modern approach, LADOIRE is one of the few brands that fully integrates the development and manufacture of its own automatic calibre for all its collections. LADOIRE is a true watchmaking brand, not only a futuristic watch design brand.

I also "imported" from jewellery a very unique technique of design.  At Ladoire we do not use CAD, but directly sculpt the shape of the watch in wax.  This technique enables us to create complex and well balanced 3D shapes.

All components, line and finishes are designed and thought of like a piece of art.  While working on metal, we are bringing balance between the design line and the material.  Lastly, the LADOIRE creations are 100 % Swiss made.

JH - What is a typical day in the life of Lionel Ladoire?

LL - There is no typical day for me; there is a surprise every day. Some days are better than others but I always live like it is my last one.

Who else out there is making watches that interest you?

LL - I appreciate URWERK and Richard Mille for their futurism.  In terms of neoclassical approach I like De Bethune and F.P. Journe. 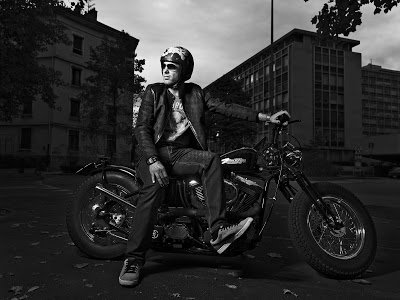 JH - With so many talents, it might be hard to answer - but if you weren't doing this, what do you think you might be doing?

LL - I would open a motorcycle custom garage at LA! (laugh)

I realize that it might be difficult, but what is your favorite Ladoire model?

What has been the greatest challenge that you have faced so far?

LL - Hand making and working on metal for someone who comes from the world and practice of jewelry are relative tasks.  Crafting a nice dial and a nice case are not very complex things to do.  The real challenge is all about being perceived as a "good motorist", i.e., the ability to create stunning horological movements.

JH - What advice do you have for the next great horological iconoclast?

LL - To be spontaneous; if he thinks too much he won’t do anything different.  To not be influenced.  If you are influenced by the mass, you become the mass and then you don’t create exciting things anymore.  In short, I would advise him to be true to himself.
Posted by James at 3:06 PM