Field Trip in Search of Made in America - No, Really!

Okay, with all of the white noise as to who may (and possibly may not) be making things in the US of A in the world of watches,  I thought I would take a few wee field trips in search of things that were genuinely made here.  So yesterday afternoon found me speaking with Ian Hunter and Jesse Brenneman, the co-founders of Deacon Giles Distillery in Salem, MA.


Mr. Brenneman and Mr. Hunter did not set out with the goal of going into the business of making spirits.  They had met while working for the Harpoon Brewery in Boston.  I am a particular fan of Harpoon's IPA -

While working together at Harpoon, they talked about working together on their own thing.  Beer and the brewing of it seemed like a natural move.  But as Mr. Hunter shared with me during my visit yesterday, there was an even more unique opportunity afforded them in the distillation of spirits - particularly rum.  Ian had heard a legendary Salem tale of a distillery staffed by Satan's minions, and while on an anniversary trip to Bermuda with his wife, the idea gelled and it was "go time" for Deacon Giles Distillery.

And it is a pretty cool story, so here is a little historical information for you:
Salem, MA (my new hometown) was at one time a major manufacturing center for rum as were many coastal towns in the area.  You might say that these towns were to rum manufacturing and distribution as La Chaux de Fonds and Biel are to watches and parts.  Now it is also important to bear in mind that Salem was the location of a rather unfortunate chapter in colonial American history otherwise known as the Salem Witch Trials.


Now take those two competing interests - temperance/purity vs. commerce/fun and throw in some good old fashioned rivalry and jealousy?  Now you have the story of the Dream of Deacon Giles.

For a more in-depth telling of the tale, I will refer you over to Salem based professor and historical writer Donna Seger who writes the much admired Streets of Salem - https://streetsofsalem.com

And here is a link to her piece on the story that inspired the creation of the Deacon Giles Distillery -
Demon-made Rum in Salem.

A brief summary is that a local distiller (and deacon of the Unitarian First Church) named John Stone found himself the topic of a less-than flattering essay drafted by local man of the cloth  George Barrell Cheever.  I refer you to the retelling offered by Deacon Giles Distillery -


Who Was Deacon Giles?

The story of Deacon Giles was originally written as a temperance tract, here in Salem, circa 1835. This story inspired us to revive the art of distilling in a town once rich in both trade and spirits, but sadly devoid of distilleries for the last 100 years. As the story goes...

Amos Giles was an impious man, distilling rum on the Sabbath, paying his employees with liquor and selling bibles from his counting room. After his employees finally walked out in anger, he unknowingly hired a gang of demons to operate his distillery. The demons decided to play a trick on Old Deacon Giles, secretly branding his barrels with messages of damnation that glowed with an unholy light when tapped. This story, first published in 1835, was purported to have been a vision of George B. Cheever, a young firebrand minister in Salem who went on to be a leader in both the temperance and anti-slavery movements. The story created a great uproar, as it was apparent to most that it was a thinly veiled lambasting of a popular local businessman. Cheever was whipped in the street and convicted of libel, but his story was reprinted numerous times under the title, “The Dream, or, the True History of Deacon Giles´ Distillery.”

Okay, so that's the background.

On to the distillery -

Ian was kind enough to give me a personal tour of the facility.  And unlike some watch companies where it is more of a "don't ask, don't tell", I got to see the whole shooting match. 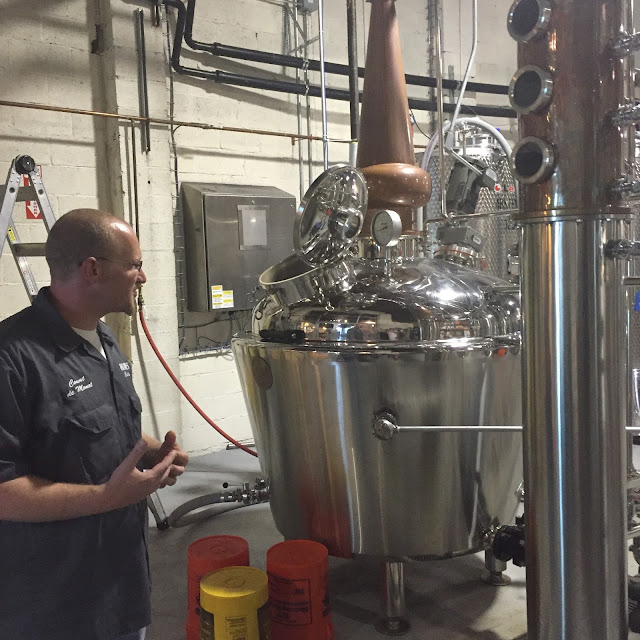 And believe me, this is not a garage operation. There is a pretty impressive array of equipment in a fairly expansive area. 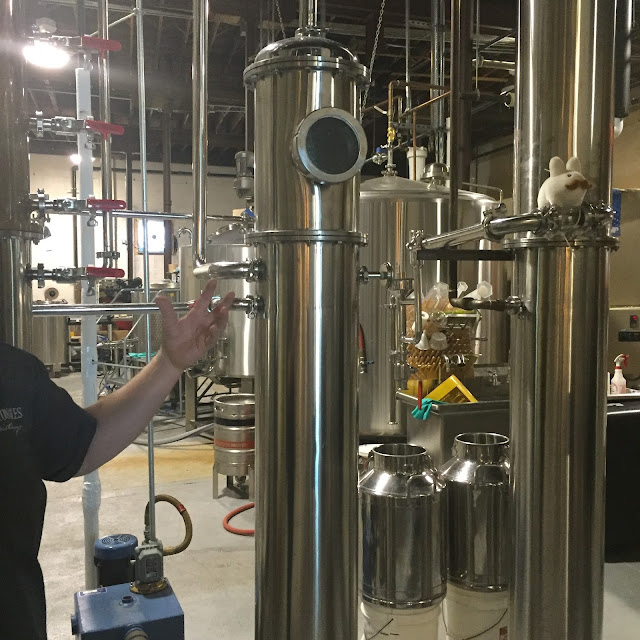 Ian was also kind enough to give me a primer on how Deacon Giles makes both rum and gin. It was really interesting, and a bit too involved to go into in any detail here.  But I highly recommend the tour.

At Deacon Giles Distillery they offer a gin which was AMAZING, as well as a rum - 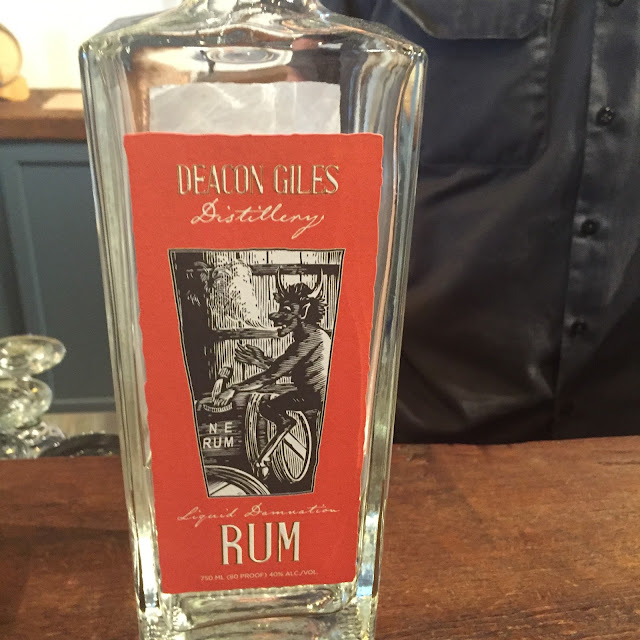 Which I highly recommend.

So I would encourage you to visit the guys at Deacon Giles if you are in the area.  After spending the past few weeks feeling more like an investigative reporter than a blogger while trying to obtain even a shred of verifiable information in the watch business, it was refreshing to meet two honest, straightforward guys working to build a business based on actual products, that they actually produced, and that they actually sell.  Pretty wild idea, huh?

Stay tuned, more field trips are being scheduled.
Posted by James at 12:51 PM