Seven Days with the MeisterSinger No 02 Green

Way back in 2003 I was living and working in the city by the bay - San Francisco. At the time there was Seregin's, a small stand in a larger wholesale jewelry collective in San Francisco located right in back of Macy's in Union Square. And working there was Francis. Francis was an horological raconteur extraordinaire.   And it was Francis who sold me one of the very first MeisterSinger watches sold in the US.
And nearly thirteen years later I find myself wrapping up a review of the latest iteration of that early single-handed time keeper.  So it's a bit like bringing it all back home.

The watch itself measures 43 mm in diameter and is of stainless steel.  The crystals are sapphire with the top being domed.  The dial is green, in fact it is a rather spectacular sunburst green.  As a single-hand there is no hour or second indication, a straightforward 12 hour scale that is divided into 5 minute segments.

At 43 mm the watch case is somewhat substantial.  For some it is perhaps going to be a bit too large, but for the average guy it is a good size. 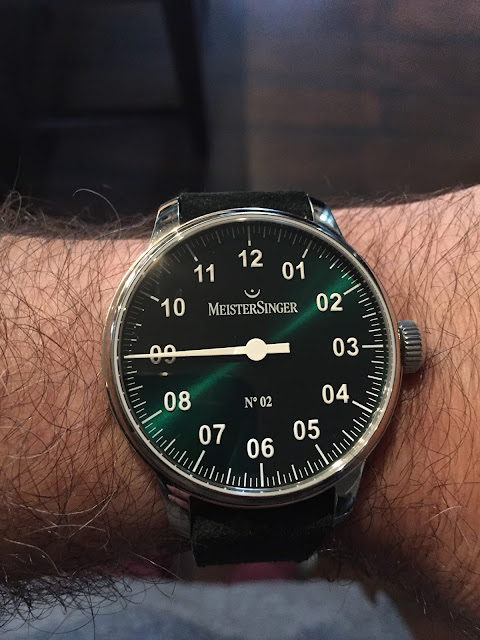 The lugs of the watch case extend slightly beyond my wrist bone, but in fairness this is something that will be encountered with watches larger than 42 mm.

The watch is extremely legible.  The use of a strong color is well balanced by the white hand and indices.

The crown is solid, and tactile.  Setting the time is smooth, and winding the movement was a daily pleasure. 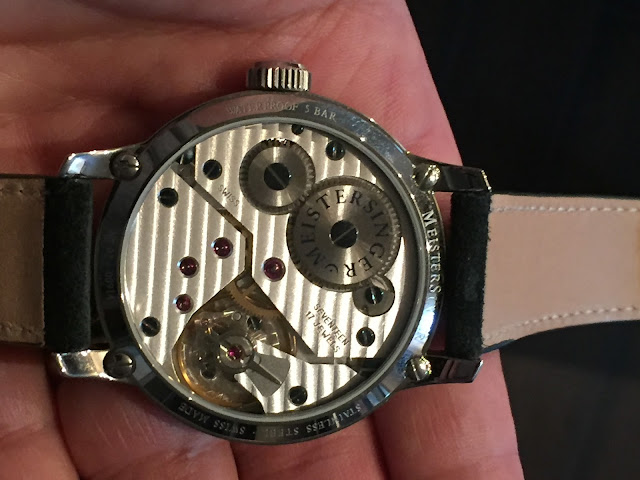 The movement is ETA's 6498-1 also known as the Unitas 6498-1. There is a nice bit of detail work. Nothing too crazy or elaborate, but enough to make it worthwhile to view the watch through its exhibition back.  The display back is secured by four screws

The power reserve is listed as 46 hours, which I can confirm was as advertised.

MeisterSinger sent the watch on a green suede strap which was pretty cool.  Suede top with a smooth leather under side. 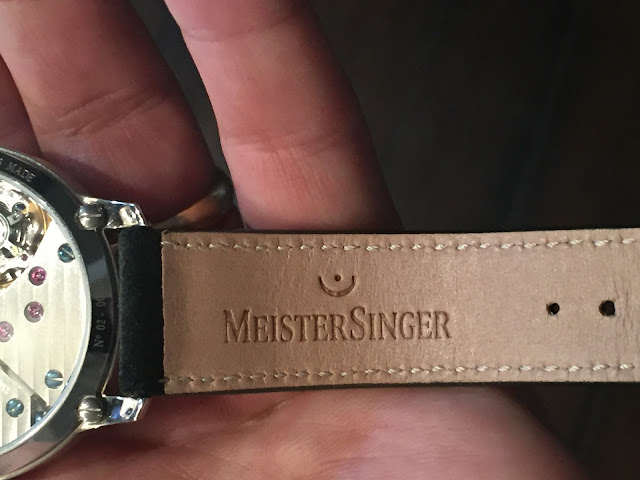 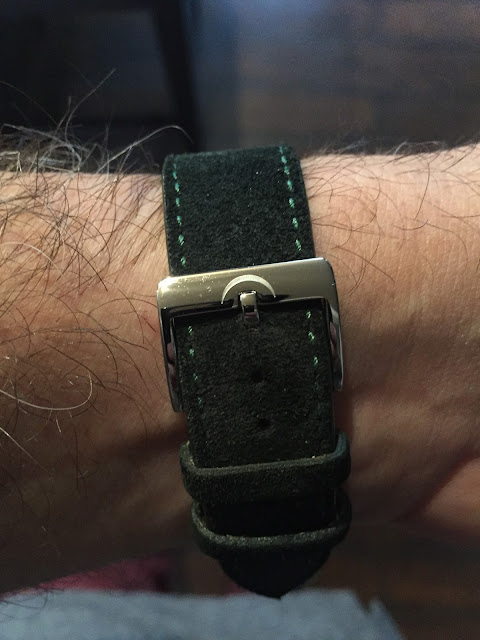 The strap is comfortable and sturdy at the same time.  The green suede is finished with an accent stitching.

So let's get down to brass tacks.  What's this watch really like?

A one-hand watch is not for everyone.  It does not lend itself to the obsessive compulsive types who wish to know the time down to the second.  It takes a different sort of approach to wear, and appreciate a watch that only offers the time in five minute segments.  Having said that, it is a nice, more relaxed way to embrace the passage of time.  It also bears mentioning that the "minutes only" layout is based in a historical context and one that has been picked up again and again by several brands.  And while many have embraced it, it is MeisterSinger is truly flying the flag for this style of watch.

The timekeeping was solid, no major variances to speak of.  After a "wind down" period to confirm power reserve, it ran smoothly without a noticeable jump or slump from a full wind.

So is this the watch for you?

The No 02 represents a wonderful opportunity to own a unique, easy to use watch with true historical relevance.  The movement is one that is pretty much idiot proof.  A hand-winding Unitas is going to be serviceable by just about any competent watch maker out there for the foreseeable future.  This is a watch that if taken care of properly, will be with the owner for years to come.

Now it is safe to say that a green dial is not going to be everybody's baby.  In fact, a bit of back story is that this hue of green was championed by MeisterSinger sales team member Nico Rensing, hence the color is frequently referred to as  Rensing Green by the team at MeisterSinger HQ.  I personally really love the color and applaud MeisterSinger for thinking outside of the watch box.

I loved it, and would buy one.