Everybody Loves a Winner

And with the sort of timing that would put Jamie Vardy's to shame, Tag Heuer announced less than 24 hours following Leicester's winning of the Premier League this year, Claudio Ranieri has joined the Tag Heuer "family".

The Leicester City story is a fantastic one, and Claudio Ranieri has finally won the championship that has eluded him for so long.  But the timing is (at least for me) cynical.  Leicester City, and Mr. Ranieri have been the talk of football WORLD WIDE since December, but I guess you want to be sure that your marketing money will be spent on a winner, not a runner-up.

But business, as they say, is business, and Tag Heuer feels that this is newsworthy - so here you go, you decide.  I have left the text in its original form. 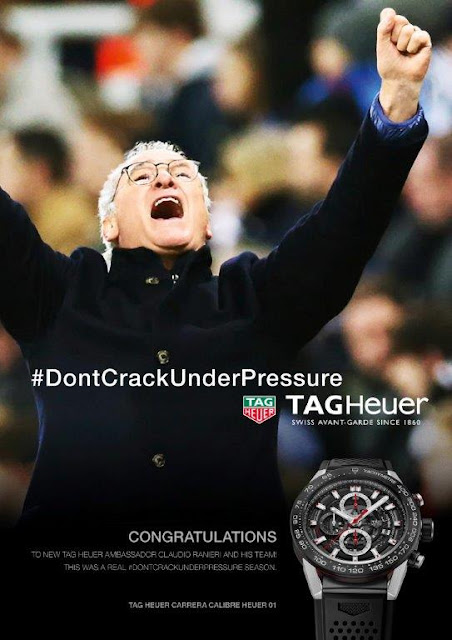 La Chaux-de-Fonds, Switzerland - Tuesday 3rd May 2016 - In his first year as Manager of Leicester City, Claudio Ranieri has managed to transform the club, which last year narrowly avoided relegation, into Premier League Champions.
Together with his team, he is a magnificent example of the #DontCrackUnderPressure mindset. Welcome to the family, Signor Ranieri!
Claudio Ranieri is Italian. He managed great prestigious football clubs such as Fiorentina and Monaco in France, Inter Milan, Juventus, AS Roma, Valencia and Chelsea. He is a big fan of TAG Heuer and wears a TAG since many years.
Just last week, TAG Heuer made its English footballing début when it became the Official Timekeeper and Official Watch of the Premier League.
Already the Official Timekeeper for the German Bundesliga, MLS (Major Soccer League) in the USA, the 2016 Copa America which will take place in the USA in June, the Chinese Football Association Super League, and the Australian National Football team, TAG Heuer is now also the partner of the prestigious English Championship. The brand has had an ambassador from the world of football, the legendary Cristiano Ronaldo, since 2014. Today, manager Claudio Ranieri joins the TAG HEUER family.