A Winter Repeat - Winding up the Filip Cleveland Westside Gold

A few years on, still one of my favorite watches to review, so once again -  15 Days with the Filip & Co Cleveland Westside Gold. 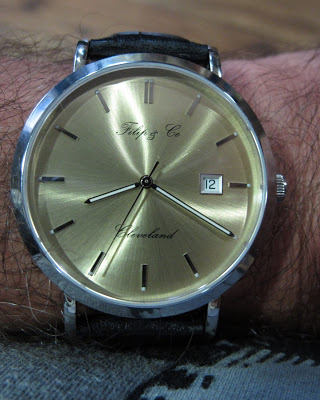 I've gone 15 days and beyond with the Cleveland Westside Gold, and it is time to wrap this up!
Starting with the vital statistics:
Lately it seems that the trend is coming back towards sanity with case sizes coming back down towards 40 mm or so. At 41 mm the Cleveland Westside Gold strikes just the right balance. It has presence and it sits prominently - but not overwhelmingly.With a case size of 41 mm, the temptation can be to to get the widest lug width you can manage.  It tends to leave you with a STRAP that just happens to have a watch attached to it.  Not so in this case. The Filip Cleveland line uses a 20 mm alligator strap.  In this instance, a beautiful black one that is padded and stitched. 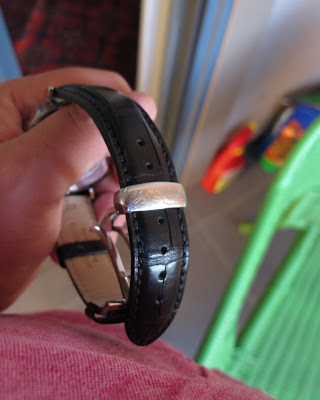 The strap is secured with a stainless steel deployment clasp that simply pulls up to release. Simplicity itself.

The watch has run very, very well. There were 3 days where the variance hit +15 seconds, but by and large it hovered at around 9 seconds per day.

The ETA 2824-2 was nicely finished and actually worth looking at through the display back. 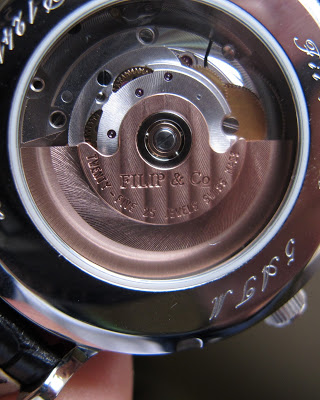 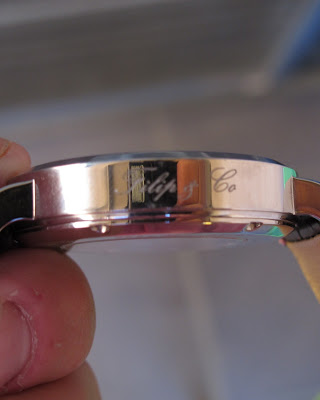 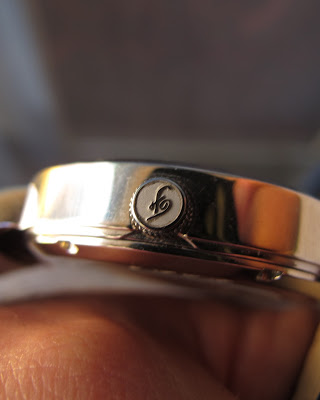 So after more than 3 weeks I have to say that this is a watch that I would spend my money on and wear with pride!  Now in the interest of full disclosure -

YES, I did grow up in Oberlin, Ohio.  YES, Cleveland was the closest "big city" so there is a bit of an emotional link.

BUT, before the watch arrived I really was not sure.  You see things online, you read a bit, and you just don't know.  The Filip Cleveland Westside Gold more than exceeded my expectations.

And I think I would like to close this with a brief commentary on "locational branding".  Let's take three different examples -

RGM - focusing on high end, unique, classically designed pieces.  Based in Lancaster, PA - but relying more on the expertise and skills of the watchmaker rather than trying to position themselves as the "watch making savior" of Eastern Pennsylvania.  And sorry if this hurts anyones' feelings, but RGM is RGM for a reason.  They've been at it longer, they have real watch making skills, and they do not attempt to buy "provenance and authenticity" through multi-million dollar advertising campaigns.

Filip & Co. - one man, designing his cases, dials, etc.  Ordering the components, then assembling them one at a time, piece by piece in his workshop in the Cleveland area.  Named his watch after his adopted hometown.  DOES NOT claim to be something that he is not.

Shinola - 'nuff said.  If you know the difference between sh*t and Shinola, I suspect you will purchase something else.  Massive marketing campaigns do not a watch make - and it is a sad statement about the sophistication of the mainstream media that a press release has the ability to become accepted fact.  Assembled in Detroit - sure.  Made in Detroit?  No more so than me - and for the record I was "made" in Zanesville, OH


So ultimately, don't believe the hype.  Do you homework, and honestly - I am just one guy, sitting here in Santa Barbara giving an opinion.  In my opinion, the Cleveland Westside Gold is worth the money, and is AS ADVERTISED.