Wrapping up the POP-PILOT KIX

So another week has "flown by" here in Santa Barbara and it's time once again to wrap up a watch review. 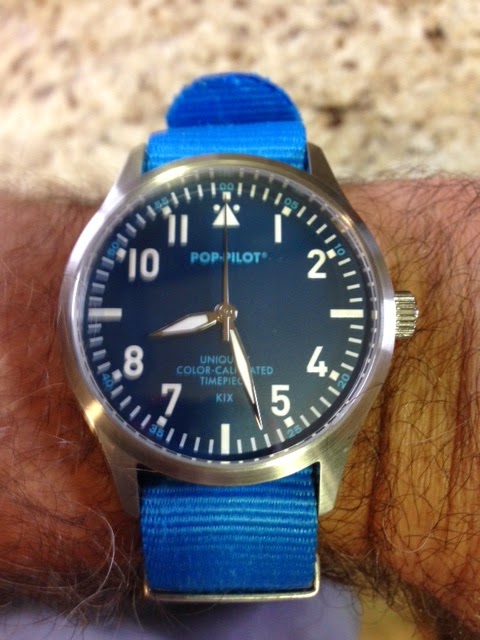 And this one has been a LOT of fun!
The POP-PILOT is a fun interpretation of a very serious, and if I'm completely honest, sometimes stodgy category of watches - the (insert deep, sonorous voice) PILOT'S WATCH!

Now if every person who wore a pilot's watch was, I don't know… a pilot, well, let's just say that the sky would be as jammed up with aviators as the sidewalks of London, New York, Paris and Tokyo combined.

But the pilot's watch is sort of one of those "grails" in a watch collection.  I don't know why, but perfectly functioning adult males go through every other aspect of their day to day lives in a perfectly normal manner, but dangle a large, black faced pilot's watch in front of them, and they lose all sense of self-control ; )

And these are nice watches by the way - historical, big, clearly and legibly marked.  But there is a certain "sameness" to them as well. 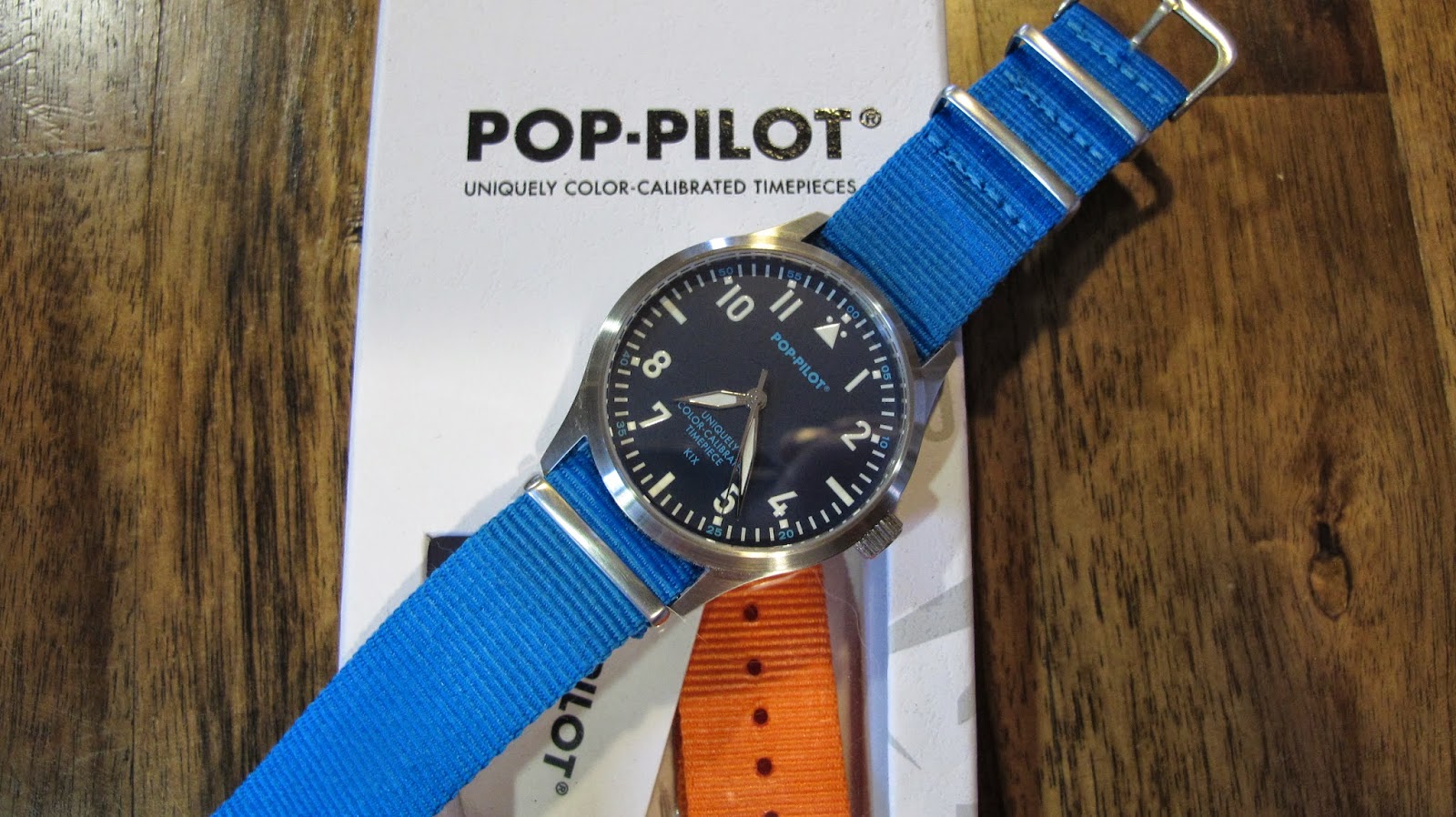 Well, this is NOT your father's pilot watch!  Each version of the POP-PILOT is designed to be fun, creative and different.  This is born out in the legend writ large across the lower section of the dial:
"UNIQUELY COLOR CALIBRATED TIMEPIECE".

I have to say, I LOVE the approach.  I read several press releases a day -

In other words, if you don't wear one or don't want one, you must be the biggest wuss in the world ; )

Well, with that in mind, allow me to introduce you to the POP-PILOT KIX. 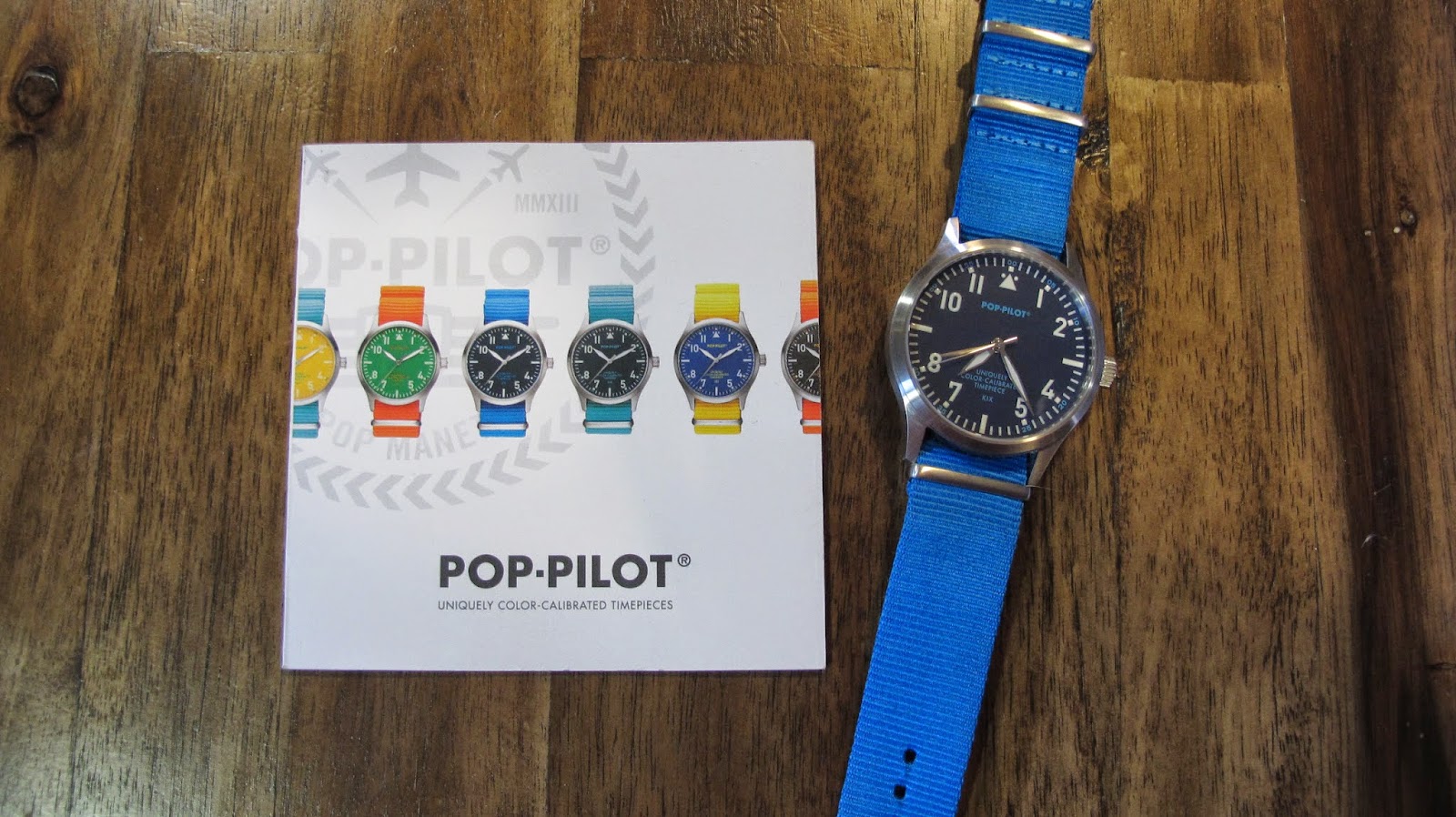 A pilot's watch can be A LOT OF FUN!

Now in fairness, the POP-PILOT I tested is one of the more "conservative" looks - a dark blue dial, paired with with white numbers and indices. 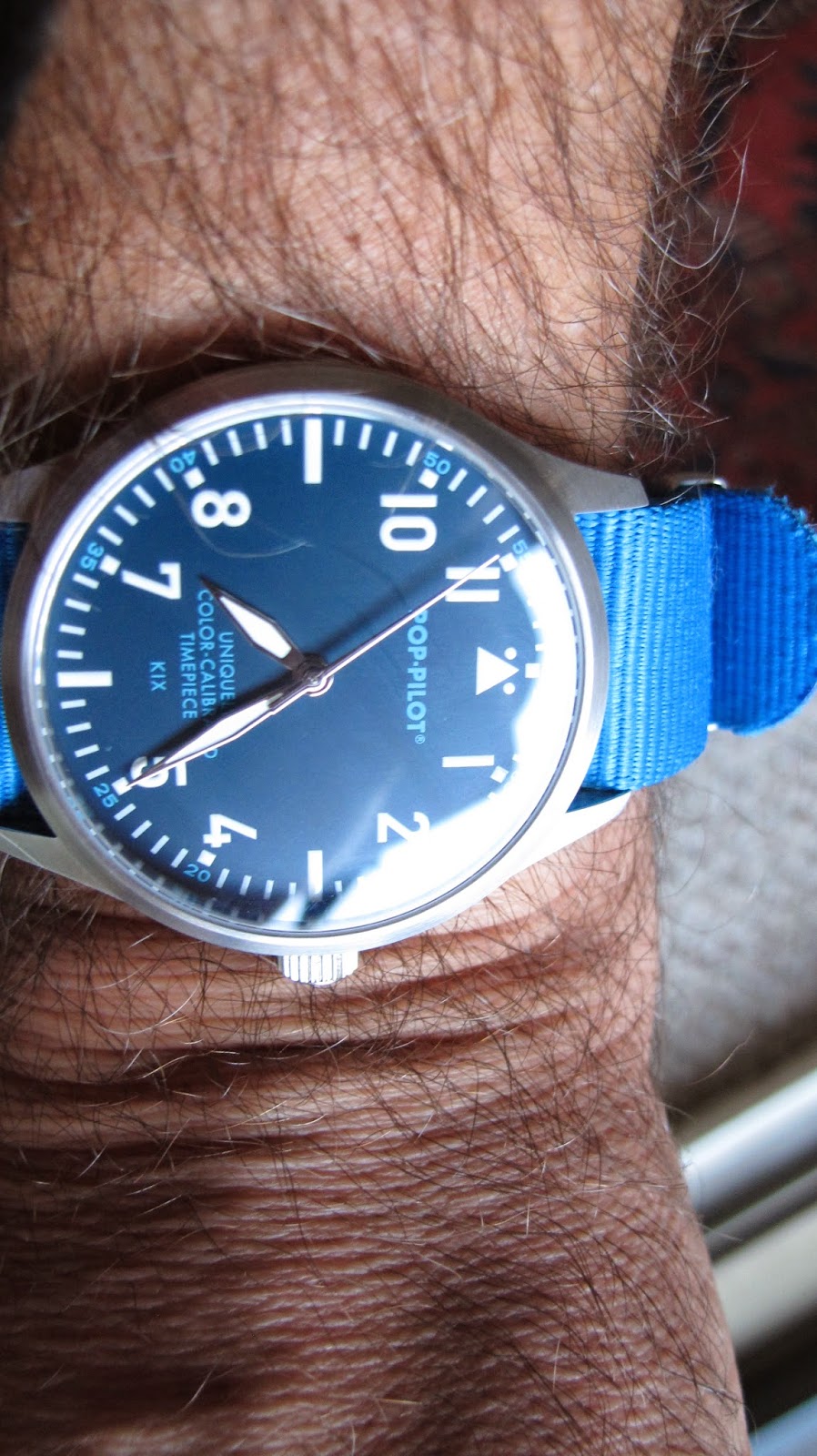 KIX is also known as the Kansai International Airport - or as it was known more locally -
KISS.  Point of disclosure - I lived in Japan from 1992 - 1995 and in that time there was only one true international airport - Narita.  Technically the BIG Tokyo airport was in Chiba-ken (one prefecture over from Tokyo). 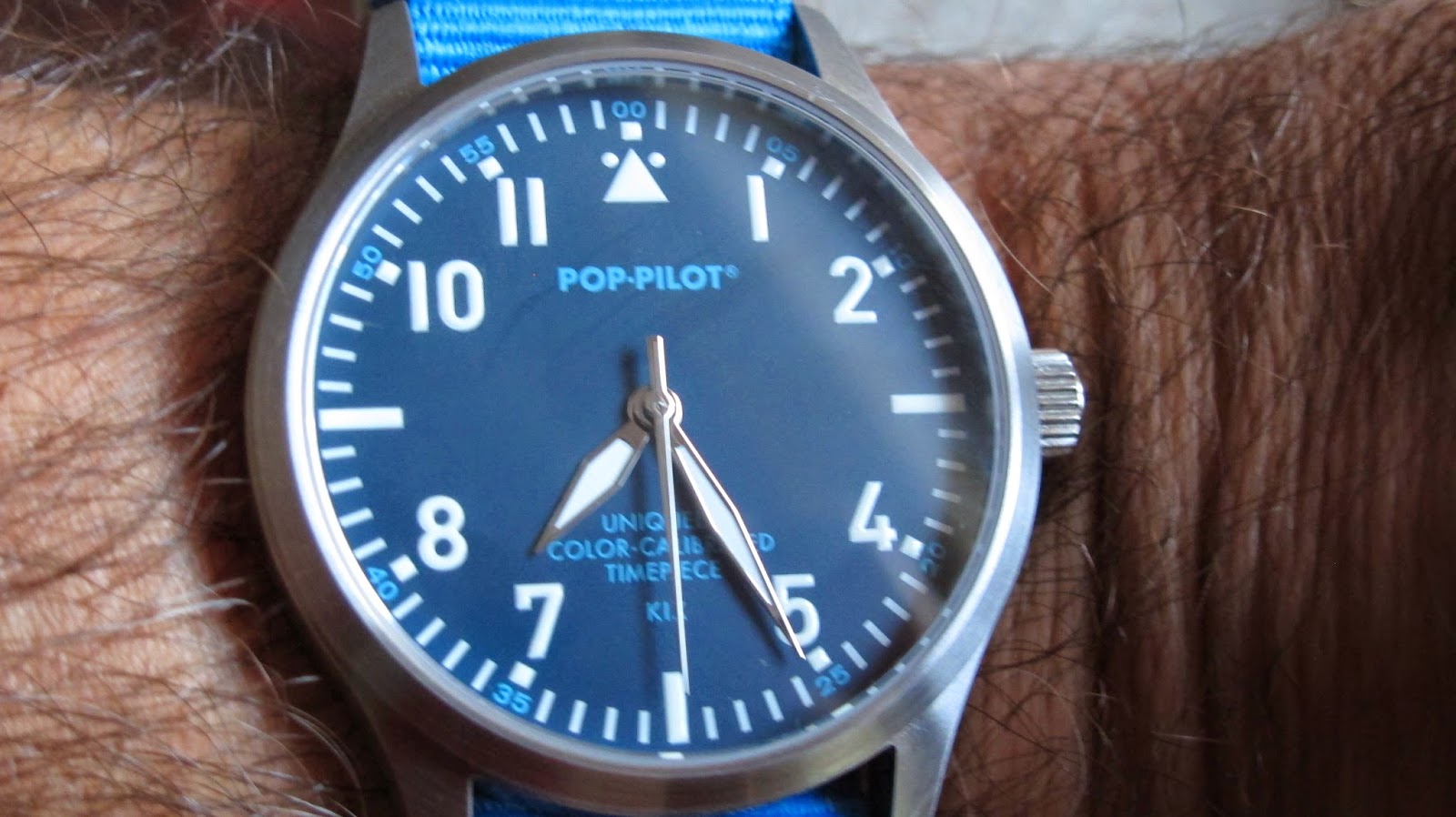 At that time, there was ONE runway in and out (or at least that was what we thought as we waited slurping soba noodles and downing Sapporos waiting for our flights to destinations west).

So it was seriously big news when word spread that a second international airport was in the offing in Kansai.  Important point of distinction for those of you not familiar with all things Nipon - although many of us look at Japan and think:

In fact, in Japan it is thought of as East vs West.  Kanto vs Kansai.  Tokyo and its attendant surrounding areas of Yokohama, Kawasaki and what is now referred to as Saitama City (but what was referred to back then as Saitama-prefecture with cities named Omiya, Koshigaya, Kasukabe, Urawa, Ageo and way, way out in the "back 40" Chi-chi-bu.  But that was more than 20 years ago.

And Kansai - which is represented by Osaka.  Believe me, they might as well be different countries as "Kanto-jin" and "Kansai-Jin" represent what for many people are as clear definitions as "north and south" in the US. 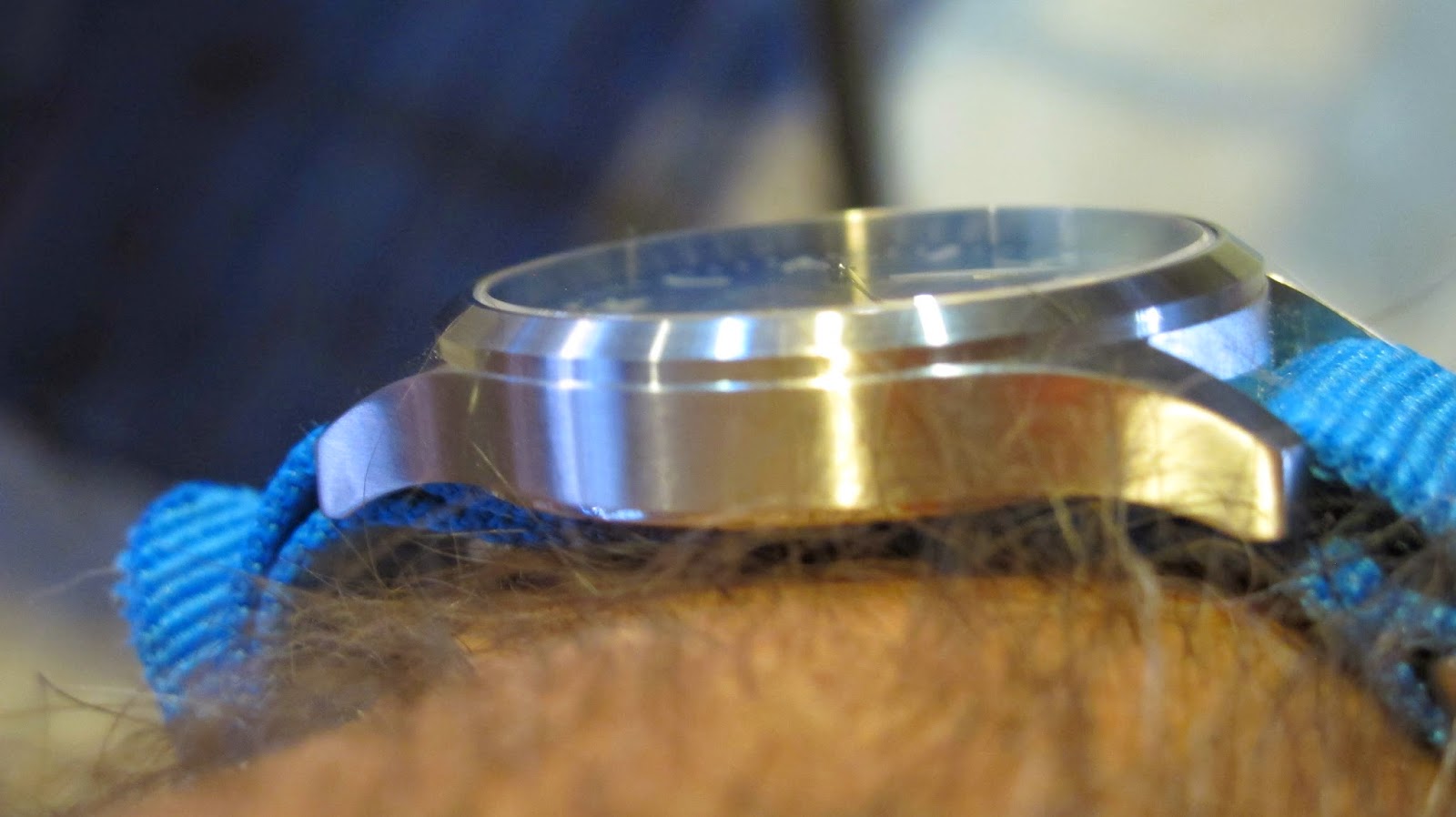 But enough about Japan and regionalism - lets get back to the watch!  In fairness, I did not know what to expect.  Our typical mindset is "quartz = cheap".  WRONG!  This is a quartz watch, but the case is solid and substantial - and dare I say it, has a bit of weight to it.  It is composed of 316L stainless steel  and measures 42 mm. 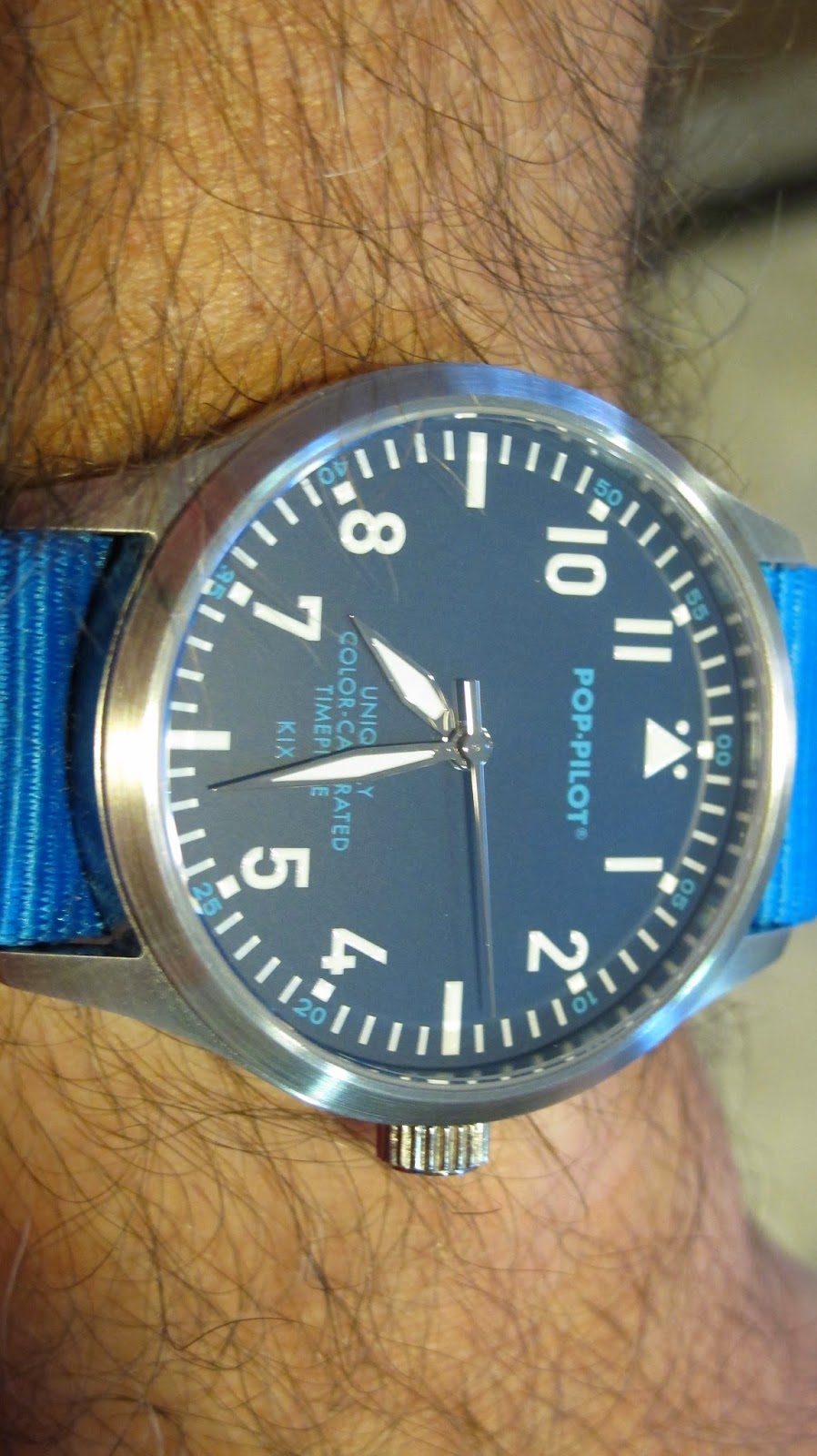 The dial is a dark blue, with white numbers and indices and lighter blue detail with the 10 minute outer chapter ring.  The inner dial is printed in the same light blue.  Blue can be cold, but in fact this proved to be warm and friendly when paired with the light blue canvas strap.  And the perfect counter point to the stodgy tone of a "PROFESSIONAL PILOT WATCH" is the legend:  "UNIQUELY COLOR CALIBRATED TIMEPIECE". 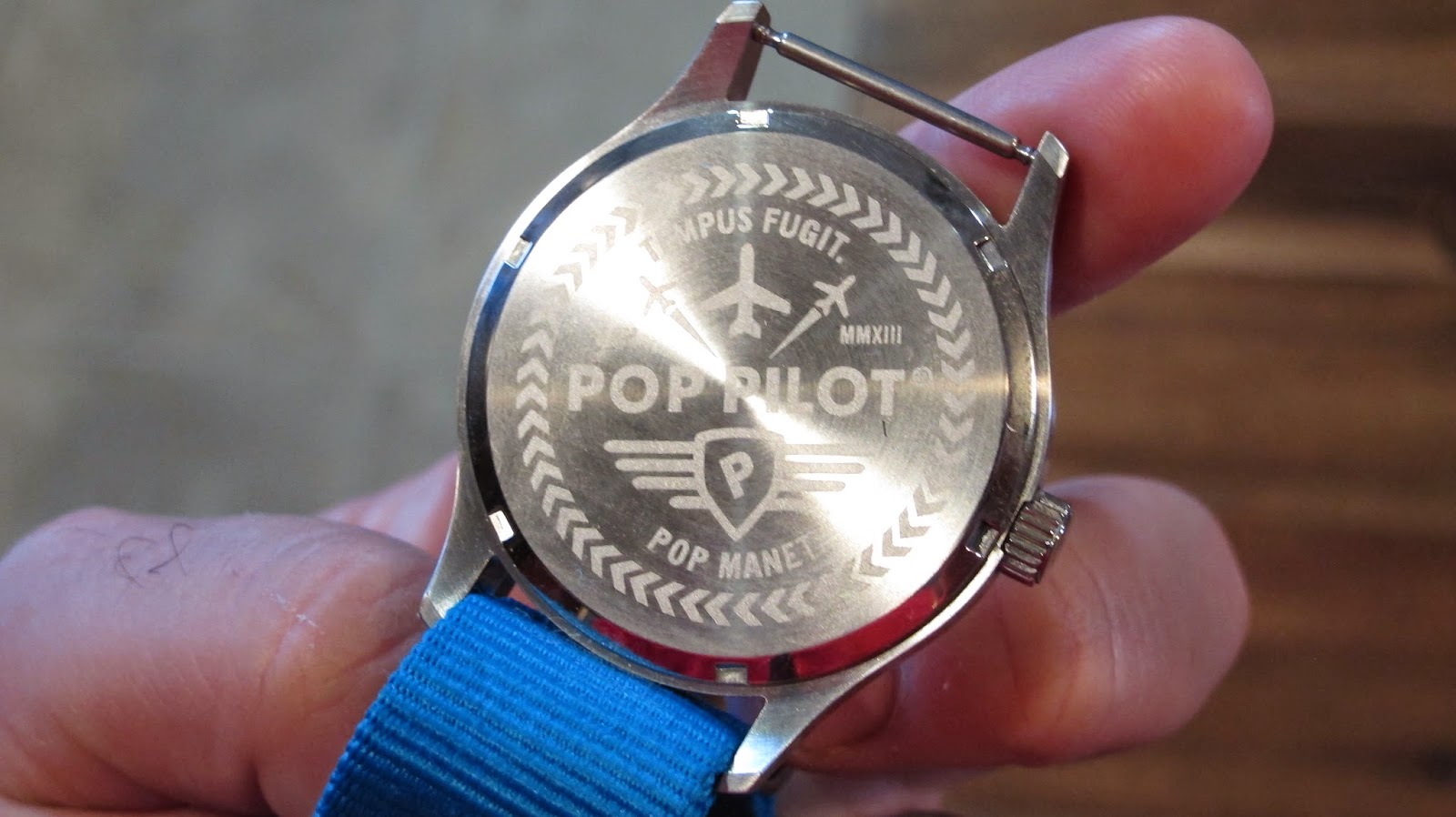 And of course, it doesn't hurt that it pays tribute to the BEST WATCH BLOG IN THE WORLD!!!
Okay, but seriously, it is seriously fun! 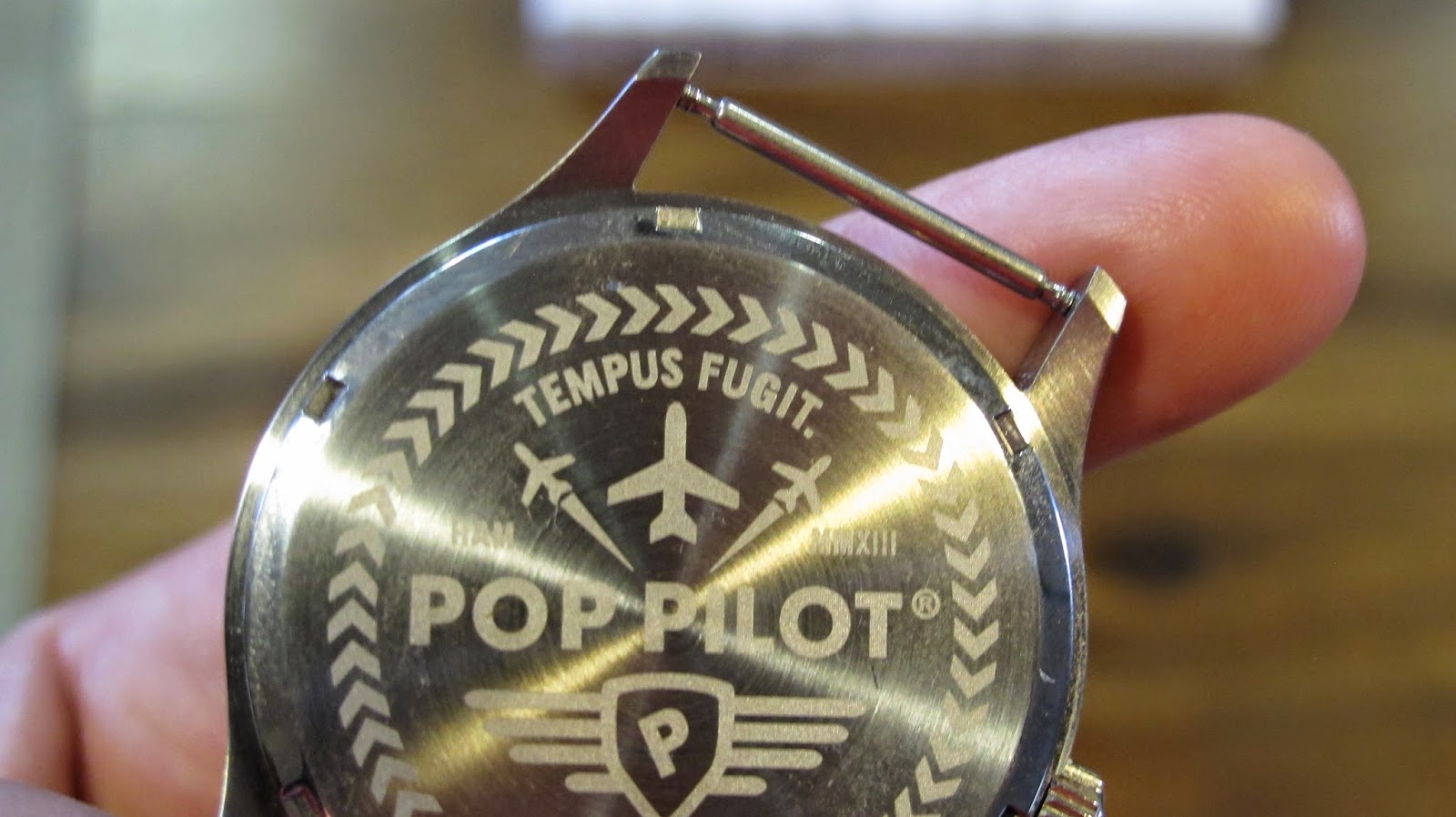 Let's be honest, the parts about a watch that we often praise as amazing - accuracy, dependability, timekeeping… these are things that you SHOULD be able to take for granted.  When did things change?  When did the ability to do what it is supposed to do - tell you the time - become an added feature? 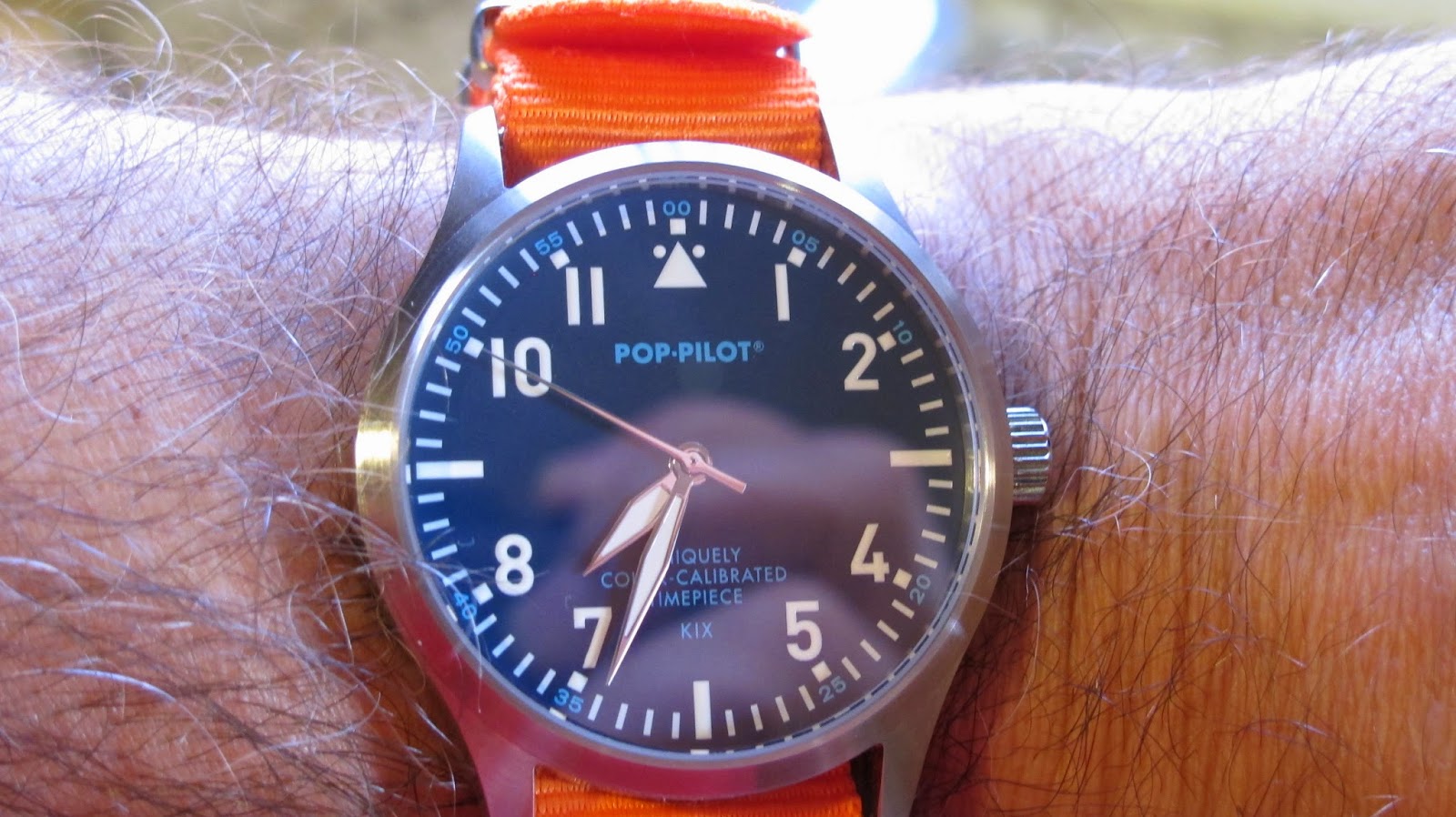 Time keeping -
As you'd expect from a quartz watch - perfect. 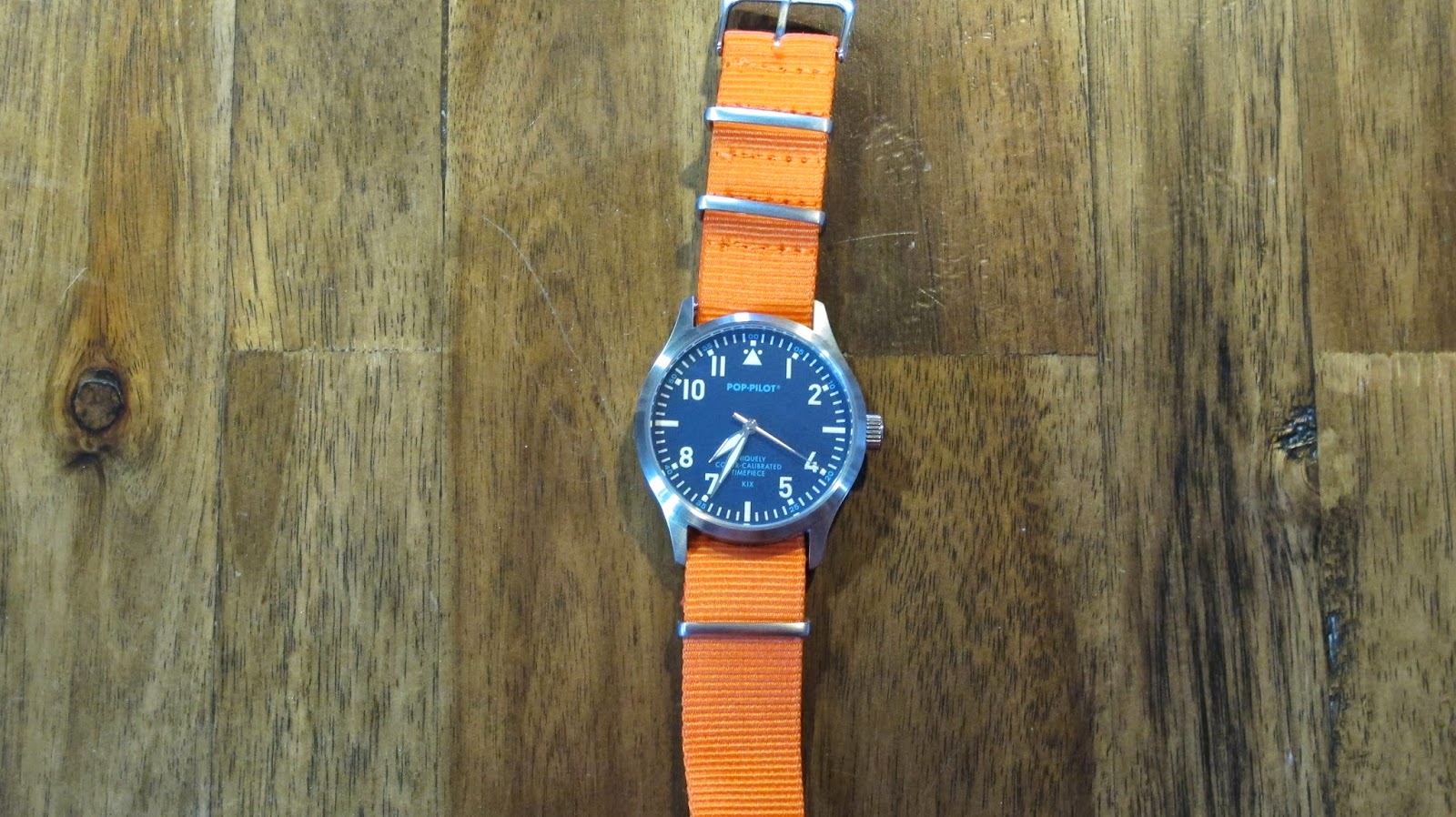 Wearability -The watch measures 42 mm, but it is definitely a wearable 42 mm. While it is solid and tactile (not light and flimsy), it is not heavy. The two canvas straps are very, very comfortable and fit perfectly.  Great presence on the wrist, but not overwhelming. 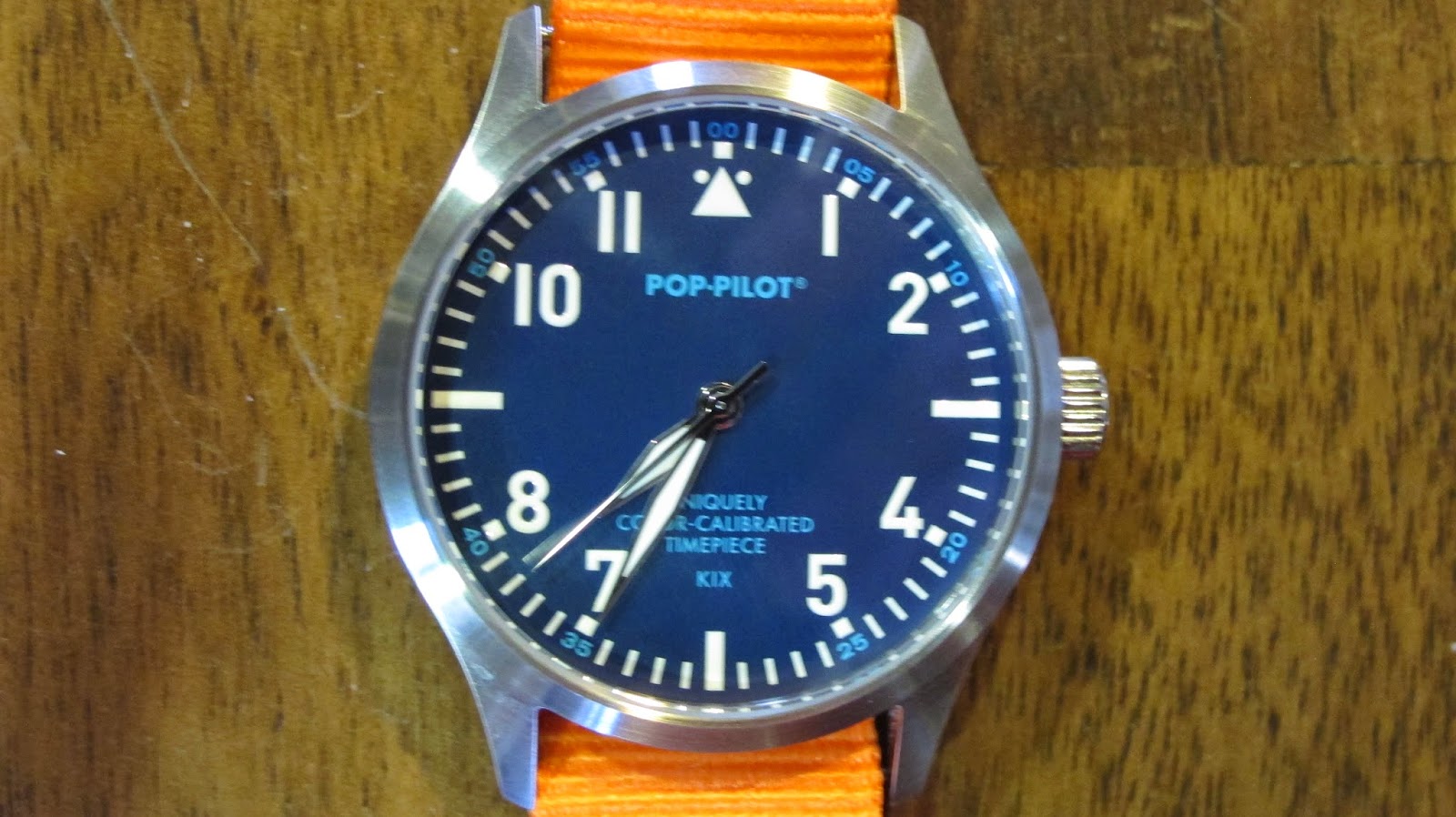 The dial is wonderfully legible and while blue on "lighter" blue, it is pleasant to look at and read. 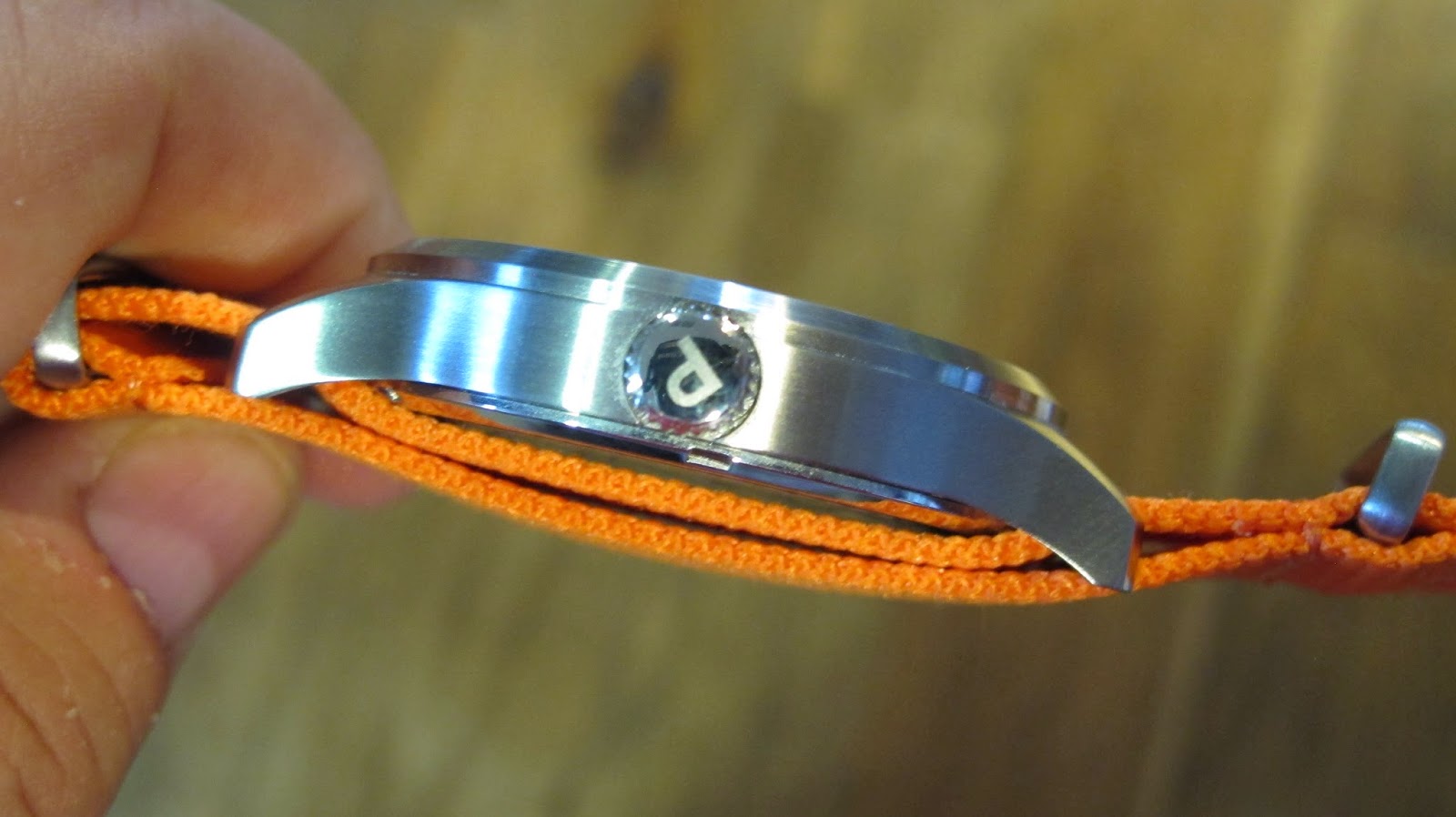 And an added (albeit unexpected) benefit is that the crown is screw down which lends to the water resistance.

The watch itself is warranted to be water resistant to 5 bars (5 ATM, 50 Meters, 165 feet).  Although I do not have a testing mechanism, it survived bathtub and some very hot and sweaty cycling ; )

Ultimately folks, you make your own choices, but for me this watch represents a wonderful interplay between fun and function - not neglecting one for the other.  If Alain Silberstein were still doing watches, and he wanted to make a pilot's watch… I'd like to think it might be like this one!