This just in from Jardur - 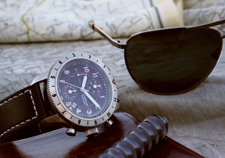 iFlightPlanner officially announced today that the Jardur Watch Company has been named the exclusive timekeeper of iFlightPlanner and will be the presenting sponsor of the official ZULU (GMT) time found across iFlightPlanner’s web-based flight planning products.


The Jardur Import Company, established in 1937 in New York City, quickly earned its reputation among U.S. military and professional pilots as one of the most trusted manufacturers of aviation watches and navigation plotters available.  Management of precise time is critical to the success of every mission for this special class of users for whom the brand catered to.  In fact, Jardur was so highly regarded among them that Lieutenant Colonel James "Jimmy" Doolittle was presented with a Jardur Bezelmeter 960 by James Howard “Dutch” Kendelberger (former President of North American Aviation) in recognition of his leadership and planning of the April 18, 1942 “Doolittle Raid” on Tokyo, Japan.
The original Jardur Import Company closed its doors in 1960 and left an incredible history in aviation dormant until it was resurrected in 2011 by now Jardur Watch Company President, CC Shermer.  “This partnership with iFlightPlanner is very important to Jardur because it allows us to pay respect to the legacy of Samuel Klepper and the original Jardur Import Company while celebrating the innovative aviation technology that is developed by iFlightPlanner and used by so many pilots today.”
Pilots who use iFlightPlanner and its web-based Flight Wizard to plan routes, retrieve certified weather briefs, calculate weight & balance and file their flight plans will now see the Jardur logo complimenting the ZULU (GMT) time in the lower-right corner of their web browser throughout their flight planning.  Andy Matthews, iFlightPlanner’s Co-Founder & Director of Business Development further described the integration by saying, “Not only will Jardur’s presence make it easy for pilots to identify the current universal time, it will serve as a reminder of times past and the craftsmanship that in so many ways set the foundation for how we now electronically plan flights.”
The first aviation chronograph launched under the revitalized Jardur Watch Company, the Degreemeter, pays homage to the original World War II era Bezelmeter 960 while incorporating all of the advancements in materials, manufacturing methods and design features which comprise state-of-the-art watchmaking.  The Degreemeter along with the ZULU, the next model to be released in Jardur’s Escadrille series, will be available for purchase in theiFlightPlanner Shop and from the Jardur website, http://www.Jardur.com.
James Wingfield, Jardur’s Vice President of Engineering, summarizes the new relationship between the two companies perfectly.  “Every flight, from takeoff to landing, is under the control of a temporal odometer,” he said.  “Fuel consumption, airspeed and even the most complex navigation calculations depend on accurate timing by pilots and the timing technology they employ.  We could not be more excited to build on the legacy of Jardur with iFlightPlanner through this innovative partnership, and we all look forward to the next time history is made with a Jardur timepiece!”