A New Treasure from the Girard-Perregaux Museum

Featuring among the recent acquisitions of the Girard-Perregaux Museum is this splendid tact watch, created by Rossel & Fils, successors of Jean-François Bautte. Its obvious Neo-Gothic style recalls three contemporary characters who were fascinated by the Middle Ages: the architect Viollet-le-Duc, author of several projects in Geneva, the art critic John Ruskin, a regular customer of the Maison Bautte and the great sculptor Félicie de Fauveau, whose sister married Jacques Bautte, son of Jean-François.

The Rossels traded under this name between 1860 and 1883, but unfortunately we have been able to obtain only a few archives concerning them. It is therefore not possible to identify the precise date of production, but as the watch is wound and the time set using a key, we can date it at the early part of this period, i.e. 1860-65.


In technical terms, the mercury-gilded movement contains a cylinder escapement. It drives an external gold hand which allows the time to be read by touch. The case is in nielloed silver with gold accents. Its circumference is adorned with 12 ‘tacts’ representing the hours. The enamel dial is curiously painted with red numbered indicators.

It has often been thought that tact watches were intended for the blind, allowing them to tell the time by running their fingers over the case. However, it is more likely that the principal use of such timepieces was at night, at a time when neither artificial light nor alarm clocks existed.

Niello is a decoration technique that is no longer used due its extreme toxicity for those who practiced it. First of all, the outline of the decoration was etched into the silver of the case, creating indentations into which a toxic mixture of molten lead, silver, copper, sulfur and ammonium chloride was poured. When this cooled, it took on a bluish or blackish hue. The case was then polished to obtain a smooth surface, revealing the decoration in contrast.

Who was the original owner of this watch that is, to say the very least, charged with symbolism? No doubt the owner was Germanic, Austro-Hungarian perhaps, given that this piece was found in Budapest. A heraldry investigation is underway, which may allow us to identify the coats of arms that feature on one of the covers. However a few leads have already been uncovered: the Maltese cross on the helmet suggests an untitled nobleman, perhaps a knight, and certainly catholic. The cross between the stag antlers on the coat of arms is a reference to St. Hubert, which is probably confirmed by the double VSH monogram (Von Sankt Hubertus?) on either side of the helmet. The ensemble is encircled by the motto “Der Glückliche zählt keine Stunden”, which means “the happy man does not count the hours”—that separate him from death? Maybe, as this is corroborated by the bat, a symbol of longevity, on the pendant.

The center of the other cover bears a hand in the shape of a sword decorated with a winged hourglass (tempus fugit [time flies], which the owner certainly did not seem to fear). This hand crosses six double segments, symbolic scenes of the different states of the human condition, whose translation from Latin are power, discord, pleasure, death, luck and poverty.

Who knows if this watch will one day divulge its secrets? In any case, it proves once again that a timepiece does much more than tell the time. 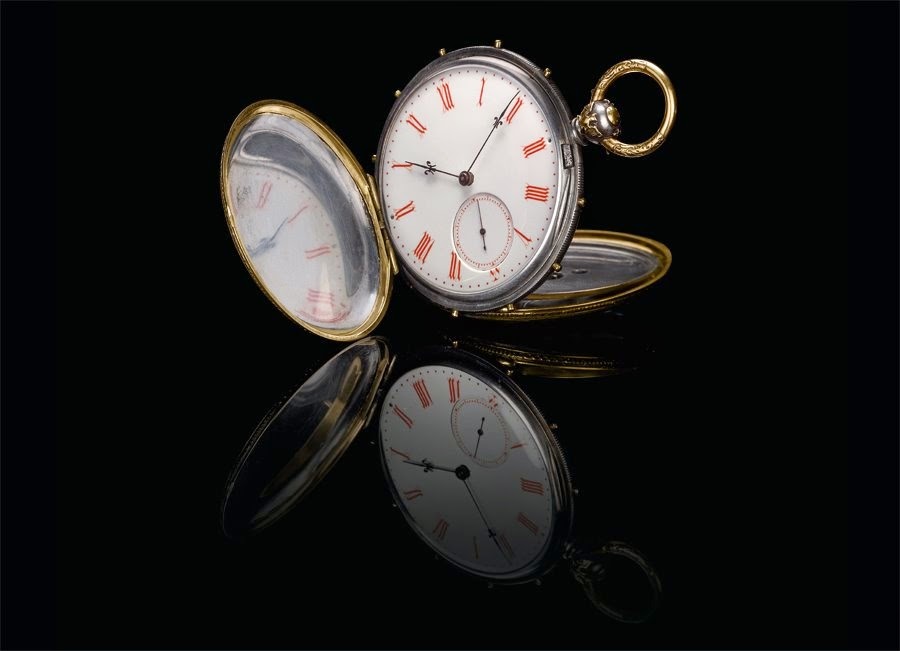