A Few Minutes with Patrik Sjögren 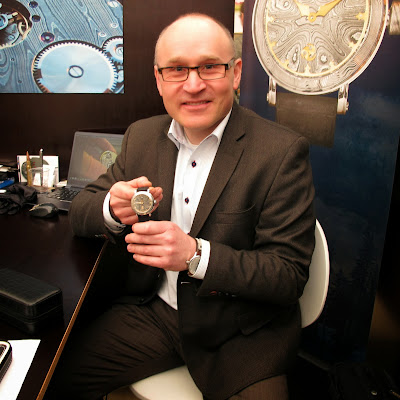 Tempus Fugit - What was your first watch?  Was it a gift?  Is there a story behind it?

Patrik Sjögren - I can't really remember my first watch but inheriting my great grandfathers Zenith silver pocket watch was a revelation.  I do recall that I enjoyed walking around in the local watch and clock store in Strängnäs.

TF - Sweden is not necessarily thought of as a watch making center  - is there a tradition of watch making there?

PS - Yes, Sweden has a long tradition of manufacturing mechanical machines, mainly larger ones but also in micro mechanic scale.  Most homes were equipped with either a wall clock or a grandfather clock and they were mainly produced in Sweden.  We've also had Halda,  a pocket watch manufacture founded in 1887 that received awards during the Chicago World Fair 1893.  The company went bankrupt 1917 like many US manufactures but the micro-mechanics know how was maintained by many employees who went into ABU,  that makes fine fishing reels and still exists today as ABU Garcia. The name ABU is actually a three letter acronym for Watchmaking Factory Ltd (in Swedish).

TF - You did not start out as a watch maker, what did you do before getting involved in watch making?

PS - I grew up among the first generation with home computers and decided to educate myself in that field, so I moved to Linköping  in 1988 to study at the best Computer Science University in Sweden.  I received my Master of Science degree in 1993 and had worked 6-7 years when I started to feel a growing urge to do something completely different.  Before getting into computers I had always enjoyed working with my hands, with either wood or metal.

TF - But you decided to make a change and take up watchmaking, what led you to this decision?

PS - I had a hard time picturing myself working as a computer engineer all the way to my retirement, and I had lots of creative and artistic energy that was impossible to express in that environment.  I found out that the Swedish watchmaking school had something that they called: "Try watchmaking for a week, or a lifetime". This makes it possible to get a glimpse of what it's like being a watchmaker.  I was one of the lucky 12 who got to try it out, and I was hooked!  So I decided to apply for a leave of absence to study full time to become a watchmaker.

TF - And more than just work on other people's watches you decided to launch your own watch brand, how did that come about?

PS - The Swedish watchmaking school is a partner with the Swiss WOSTEP organization, which means that the education aims to make the students into very good service watchmakers.  However, I wanted to learn more about manufacturing, polishing, which is more in line with the Swedish watchmaking tradition.  In other words, Swedish watchmakers are historically trained to have a very broad knowledge and ability to work on every aspect of the watch, not "just" the movements.
I then started a watch web shop during my second year at school and focused on well known brands that were not available in Sweden.  I had an idea that I could combine this business with high level watch servicing.
TF - How did you and your partner, Johan Gustafsson get connected?

PS - Johan had a vision of using his steel in watches 1-2 years before meeting with me. However, he was disappointed with the results when discussing and trying out his ideas with other watchmakers.  Nevertheless, he was determined to push forward and he called the Swedish watchmaking school to ask for advice.  As it turned out, Hans Erman, my first teacher in the school answered his call and suggested that he contact me.  Hans was well aware of my aim to become a watchmaker who would master the craft and not "just" become a very good service watchmaker.  Johan and I met during late summer 2007 and we clicked immediately.  We both felt that we had the same passion for the handcrafts and also a drive to get things done.  The first GoS watches were finished in spring 2008 featuring our own tank style case,  a Damascus steel crown and dials in Johan's steel.

TF - What was the first GoS watch?

PS - We made two watches in our own tank style case and with 6497 movement. We even made the crystals here in Sweden. The watches  are a bit crude when you look at them now but we had a few elements there early on such as the Damascus steel crown.
TF - I know it might be difficult, but what is your favorite GoS watch so far?

PS - It must be one of the models with Damascus steel cases. I'm a sucker for blue dials so I'd probably opt for either the Nordic Seasons Autumn or Winter. The first Autumn was really nice and it was also the first one with our Damascus steel modified Unitas 6498 movement.

TF - What does GoS have in store for us in the coming year?


TF - Who else out there is making watches that interest you?

PS - Personally, I prefer a good design and finishing in front of a massive amount of complications. There are many independent watchmakers doing a great job and its difficult to name just a few. Vincent Calabrese, the man behind the golden bridge, was one of my favourites during my watchmaking studies but I enjoy the work of all AHCI members. I also think that Stepan Sarpaneva is a brilliant designer.

TF - If you weren't doing this, what do you think you might be doing?

PS - I'm not sure but I think that servicing antique watches would be quite fulfilling as it often requires the manufacture of replacement parts.

TF - What do you like to do in your spare time?

PS - I'm a decent drummer on an amateur level and I used to be quite active in the local music scene of Linköping. Although I play much less now than 10-15 years ago I still enjoy both playing and listening to good music. The Linköping Jazz Orchestra used to be the No1 big band in the region but we have not been so active lately. There are 2-3 records as a testimony of our glory days,  and they are something that I'm quite proud of.

I feel a need to be outdoors once in a while as I really enjoy hiking in the Swedish mountains. The natural beauty of Swedish nature is an important aspect of both my and Johan's life and I think that shows in the way we make our designs.

TF -  What advice do you have for other aspiring watch maker/brand creators who might be considering "changing their lives" like you have?

PS - Well, it is difficult to describe the amount of work that is actually required, especially if you don't have any investor backing you up. You really have to be very focused and have a strong drive to get things done.  I think that some of the AHCI members have a mentoring model that might be good to try out before leaping into creating your own watches.