Re-heating! Seiko and Japan - through my eyes


Happily Ever After - "Preservers of Important Intangible Cultural Properties"

We live in a throw-away society - and I hate that! Regular readers might recall this image from a previous post. This was a much maligned hand-wound, 17 jewel SEIKO wristwatch that I found on EBAY. I suspect that this poor fellow had been bashed, and then shunted into a dresser drawer. 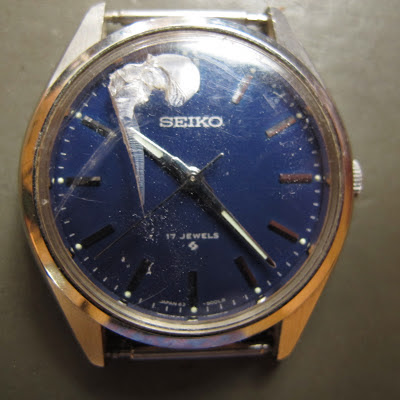 I think it is only fair to take a few minutes and really talk about Japan, and what it means for me. So apologies in advance, and if you feel the need, hit the fast-forward button, no offense taken.

I grew up a Northern Youth. I had a sheltered upbringing - my problems were, admittedly, first world problems. And much of this time is fuzzy. But some things I remember pointedly - I remember being seven years old, and sitting in Mr. Grusser's class room. He was our teacher and had spent years working on Indian reservations - that is what they were called in the 70s. He was a good man. And in my class there was:
Henry- his family had lived in France for a year and were just returning to the US.
Milan Desai - from India.
Kosuke Inaagaki from Japan. His father was a noted scholar from Tokyo who was a professor at Todai (Tokyo) University.

We were kids, and we talked about the things kids did.  Henry taught us about Babar - and I suspect a deep-seeded need to see elephants outlive me was born.  And a desire to live in France!
Milan instilled in me a desire to see everyone be healthy - if I remember rightly, his father was a doctor from India, and even at seven years old - he was far more eloquent and more sophisticated than I hope to be even now. 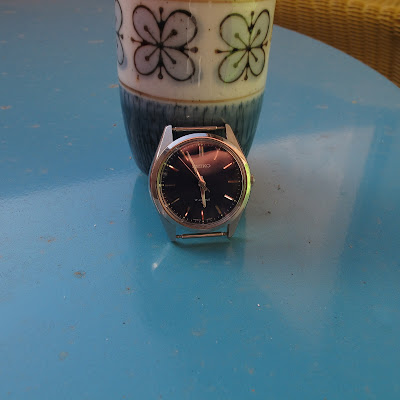 But Kosuke fascinated me.  Fascinated me on such a sub-atomic level.  He spoke a bit, but not a lot.  But his English was fine, probably better than this Northern Youth's.  I know that in hindsight that he had a lot to say, but also knew something that I have only learned later in life - that time is precious, and we are called upon to contribute something special - and oftentimes we say what is important.  And at the end of the year, his family returned to Japan.  And I remained fascinated by Japan, France and India.

And I suppose that in my own way I hit the "fast-forward button" and suddenly it was 1985.  I was a Junior atOberlin High School, and at soccer practice one day this kid showed up.  The coach introduced him and something stirred in my memories.  He explained that Kosuke would be with us this year, and explained that he had been with us back in the 70s.  He then asked if Kosuke remembered anyone and he pointed at me and said "I remember him".

Understanding that my life between those two points had been something far from memorable.  But for whatever reason, we connected.  And an obsession with Japan was reborn and smoldered through my last year of high school, through university and ultimately delivered me to Satiama-ken in 1992 as a newly minted English teacher, setting up shop in the outskirts of Tokyo.  Kosuke was at that time a journalist for the Yomiuri Shimbun.  Not bad for a transplanted Northern Youth!  If you are going to be a journalist, why not be one for the Japanese paper of record?

And when I think about that time between grade school, then high school - and then our twenties - I was blessed with a friend that I probably didn't deserve, but one that many of us long for in our later years. And I suppose that is in many ways this is what I see in this vintage SEIKO.  A beautiful hand-wound watch that tells a story.  A watch that I would wear proudly before passing it on.  Something that reminds me that friendship goes beyond years, or distance.  Friendship is the very best type of incurable virus - we're stuck with it . 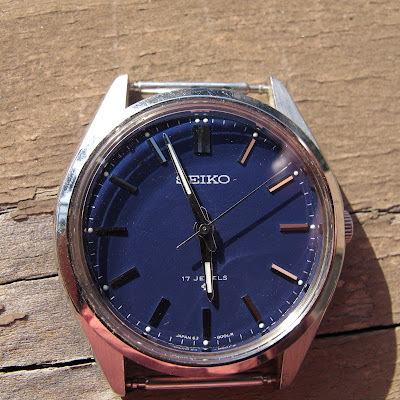 This is what I have decided to call the Kosuke SEIKO in its "after" condition.  A new Seiko crystal installed - it is is wonderful, clean and nearly perfect  - just like my memories of a childhood friend.

The blue of the dial is indeed a blue that I have seldom seen on a Seiko of this age.  And while I know that they exist (because clearly this is one) try to find a hand-wound Seiko of this vintage, not too easy to come by, just like a good friend.
Posted by James at 11:14 PM