Wrapping up - 15 Days with the Lemania Chronograph

Okay, so I am a day late in wrapping this up, but it is time to sum things up and get ready for the next review!
In the process of doing this review I came to realize that this watch and the SWATCH Group in general tend to elicit some very powerful feelings.  From love to hate, Santa Clause to Satan it seems that in the watch world right now there is no shortage of opinion about SWATCH.

But all of that is for another time - let's talk about the watch.

The watch is a nice size - 43.6 mm wide and 42 mm long.  It is stainless steel with sapphire crystals both front and back.  It is, according to Lemania, rated to a water resistance of 20 bars.  One interesting thing is that it has a screw down crown.  This is something that I have seen more and more of recently.  In the past this was the provenance of dive watches, but more and more watches of all description are now coming with this standard.
The case itself is actually quite nicely constructed.  Smoothly finished and it lends a very nice framing for the watch.  It is a comfortable watch to wear.  Not too big, not too small. 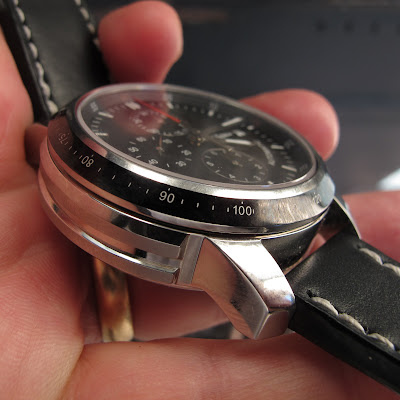 The bezel is black with the tachometer scale printed on it.  It is  a nice pairing with the dial and hands.
It is clear and legible, however owing to the angle of the bezel, it is not the easiest thing to read.  It is one of those features that looks cool on the watch from a "model" standpoint, but it is not ideal in actual use. 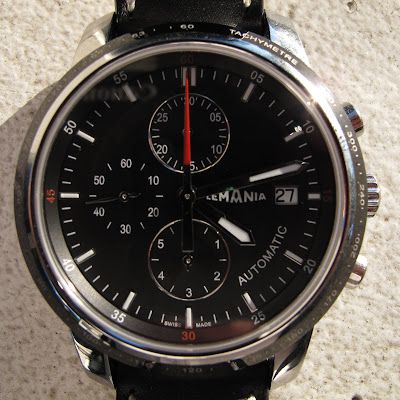 The dial is extremely legible.  The use of white indices on both the main dial as well as the sub dial.  One thing that I might have done differently is the hands.  The stainless steel hands on the three different sub dials are not lumed, and because of this they are really not legible when viewed against the black dial.  This is not a problem with the main second hand with its red tip, or with the hour and minute hands as they have generous white lume.  Don't get me wrong, it's a cool looking combination, but it is really not as legible as it could be unless in a fairly well lit area. 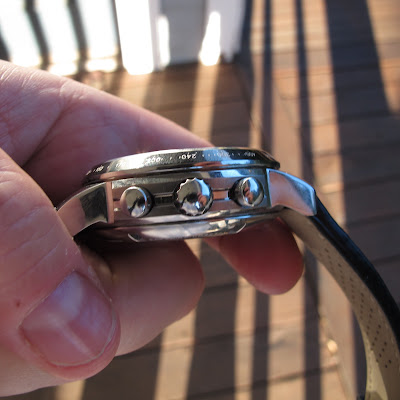 The crown and pushers work well.  As I said previously, the crown screws down.  The push pieces work well - no false starts or stops and the second hand always resets correctly. 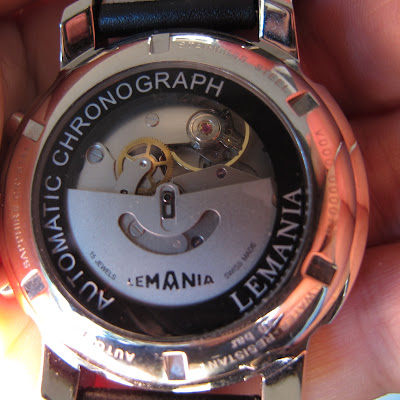 The movement is, of course, what everyone has been curious about and what some of the most vocal feedback has been directed towards.

Is it dazzlingly glamorous?  No.  Does it work perfectly - yes.  The movement is a 15 jewel, self winding chronograph.  It is utilitarian and it is not beautiful to look at - at least not in the traditional way that we have been trained to view these things.  I cannot and will not disagree with the folks out there who feel that the SWATCH group could have done something more with the finish/construction of this movement.  But then I also have to remember a few important things -

First and foremost is the price.  This watch costs less than $900.
Now I realize that by and large you get what you pay for, but at $890 I think it represents decent value for the money.  I have worn the watch, it has performed perfectly.

Secondly - and this bears remembering, this is not a commercial product in the traditional sense.  My understanding - although nobody at SWATCH Group has returned my requests for comment - is that this was a watch born out of necessity.  Essentially, that in order to protect the Lemania name, they had to produce and sell something with the name on it.  Now, as I said in previous posts, this could be the start of something interesting.  And I disagree with the folks who feel that it should all be the highest (i.e. expensive) level possible.  ETA makes all sorts of ranges of movements, and I think that Lemania could certainly have entry level mechanical chronographs for folks out there with more modest means, and could certainly do the nicer, higher level stuff as well - but I refuse to believe that it has to be all or nothing.

But this is an entire watch, not just a movement - so last but not least the band - 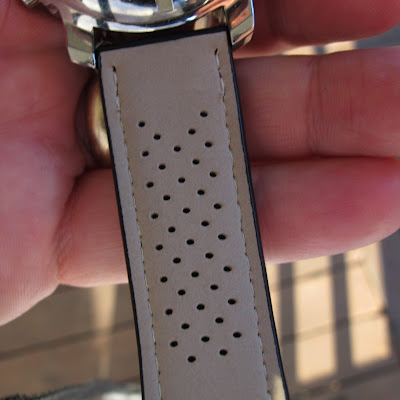 The band is black with white accent sticking.  It is certainly of a good quality.  the underside of the band is perforated with allows for some decent ventilation and will lead to a longer strap life. 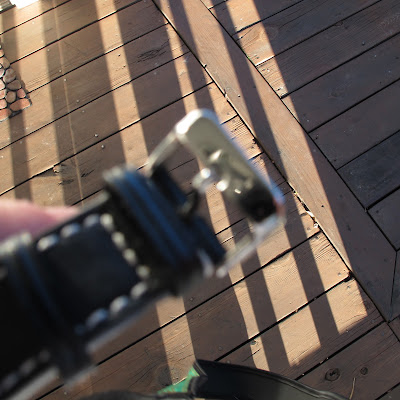 The buckle is a normal folding one, no logos or embossed features.  The strap has been very, very comfortable to wear and has held up well.  It has actually become a bit softer as the days have gone by.

The timekeeping has remained steady at +10 seconds per day.

So to try and sum it up, for $890 - I think it is a reasonably priced watch considering what it offers.  Could the movement be higher-end/higher quality - sure.  But then again it could also be much more expensive.  Would it be nice to see a higher quality (and by necessity) more expensive Lemania?  Yes if it would mean that there might also be some room for a product like this, and that maybe given that economies of scale could be brought into play, a nice entry level chronograph could be available at maybe $700 US.  But let's also consider this, SWATCH Group has several expensive, to very expensive brands out there already.  In all honesty they would not be filling a need, they would be creating one and filling it.  But I think that there could be room out there for something niche specific like this.

Truth be told, until someone decides to share more with us, we will not know definitively what the point of producing a very small number of Lemania chronographs was.  Maybe to protect a company name, maybe to test the water for a bigger splash... maybe just to give us something to talk about.

But having worn the watch, I can say that it is solid, looks good (I've received a few offers to sell it already), and it could be the perfect watch out there for someone who wants a mechanical chronograph but does not necessarily have a great deal of disposable income.