The ochs line due ore / 2 timezones

two time zone or due ore

Sapphire crystal by Stettler in Lyss/Switzerland.

The entire watch is covered by a 2-year guarantee.

Dear LVMH (and frankly every brand out there),

Consider this your wake-up call. It's time to free yourselves, and free your celebrity partners from the Squid Game that is brand ambassador bingo.

So right off the bat, I want to make something crystal clear - the topic of today's post is on the public conduct of brand ambassadors, and why brand ambassadors can all too often come back and bite you in the hind quarters. Brands typically like to have an ambassador that is in the news for positive things, and tends not to be on a soapbox venting his/her spleen.

So to be clear, this is not a post (or debate) about whether or not vaccines work, whether COVID19 is real as opposed to a plot cooked up by some secret cabal bent on world domination, or even whether or not Bigfoot exists. (As far as Sasquatch goes, I have an open mind).

It is fair to say that the celebrity wranglers in the watch division at LVMH might be reconsidering some of their recent choices. For better or worse, since the somewhat goofy reign of Nataf, Zenith has struggled to fully understand who they are as a brand, what type of  brand they are and how to gain traction in a world chock full of high end manufacturers. All this while coexisting in the fishbowl of a watch group that never met a famous brand ambassador, partner, friend of the brand it didn't like.

"As the top rated quarterback in the NFL and a living legend in American football, Aaron Rodgers knows what it means to reach your star, and do it with impeccable timing."

At least, that's how Zenith saw it when they signed him to be the face of the brand in North America. I will say I find it intriguing that the folks in Le Locle seem to have an almost fetishistic desire to sign NFL quarterbacks to represent them, yet they also seem to have a knack for picking these guys just after they've reached their "zenith"... see what I did there? Sorry, too soon?  It is a "thirst trap", and apparently they're still thirsty.

Now as someone who prides himself on speaking his mind, I respect Mr. Rodger's right to say or do as he pleases. But then again, Zenith is not dropping tons of cash in my bank account or duking me with multiple chronographs. And as you can tell by looking at the site, I am not courting multiple advertisers.

One other interesting thing to consider in this particular sideshow is the sudden about face of conservative media outlets (and more than a few conservative watch retailers in California) who previously told Colin Kaepernick to stand, and for LeBron James to "shut up and dribble", who demanded that everyone respect the President of the United States... and interesting that many of these same people now laud Mr. Rodgers for his "I don't give a f___!" approach to public relations, and his assertion that the White House is "fake". I would like to think that with the benefit of an undergraduate degree from Cal Berkeley he could have been more eloquent. It's clear that the difference between being a spoiled athlete who should clam up and stick to sports, and being a "freedom loving not afraid to speak his truth individual" is all about perception...or shades thereof.

And speaking of  "challenging" friends of the brand, we come to Hublot. FIFA is a no-win situation unless you concur with FIFA's president, Gianni Infantino's assessment that holding the World Cup twice a year will prevent the death at sea of African migrants -

And hey, if it just so happens to put some more cash in his and FIFA's bank accounts, what's the harm?

Floyd Mayweather's selection as an ambassador raised such a stink with one NYC based watch maven that they swore they would never darken the door of any event Hublot hosted! That resolve lasted about two weeks. A press lunch with free flowing champagne and an audience with Jean-Claude Biver must have mitigated this individual's (self) righteous indignation.

As it applies to his tennis, and a lot of the really cool things he has done with charity, I am a fan of Novak Djokovic. That being said, one particular irony was this little missive from 2020:

Now before anyone goes crying "fake news", this is from Mr. Djokovic's own website.

And once more, this is not a post about vaccinations, COVID mortality or the Loch Ness Monster...although I have seen Champ on the Vermont side of Lake Champlain

Now that the humor is dispensed with, let's talk about why these situations are bad for business (and public health and the fabric of society).

In Aaron Rodger's case, he is absolutely free to say and feel what he does. That being said, he is a public figure, and as such he is going to come under scrutiny - you take the rough with the smooth. Unfortunately, Mr. Rodgers is serving up his dissatisfaction with a LOT of fairly random and wide-ranging anger and open hostility, and that is never a good look for a brand ambassador. He is now at the center of what is becoming an even more heated and pointless debate. The heated aspect is understandable as there is a ton of anger on both sides. The debate is pointless because neither side is showing any side of changing their mind. It is essentially like pissing into a cup of coffee believing you'll improve the flavor, but you simply end up ruining it for yourself and anyone else.

In the case of Mr. Djokovic, there is probably too much to unpack, but the short form is this - Australia is (sorry Mr. Djokovic Senior) a sovereign country, and their rules are their rules. You don't have to like them, you don't even have to agree with them. But you do have to respect them if you wish to be a guest in their country. What you do in your own place is your own business. That being said, Djokovic the Elder beseeching Queen Elizabeth to intervene as Australia was a Commonwealth country added a bit of slapstick to an otherwise sad and jingoistic pastiche. I am fairly confident that every so-called western country has not and is not actively conniving to keep Mr. Djokovic the Younger from remaining the number 1 tennis player in the world. Although as bat-shit crazy theories go, the idea that the "EVIL WEST" could get its collective act together enough to hatch such a diabolical plot is the stuff of conspiracy theory legend. Consider this, we can't even all agree to use kilometers as opposed to miles, or to all drive on the right hand side of the road as opposed to the left. Or even whether pants are underwear or in fact trousers. The fact that Djokovic the Elder thinks that we are that well organized (and cunning) is flattering, albeit downright laughable. Let's hope some time off and a cool drink (not Kool Aid) will help him get back in touch with his better angels.

In not so distant times, I was responsible for seeking celebrities (both mighty and small) to partner with various brands. And in truth? I was always anxious about it. The rule of thumb was (and probably remains) -

Everyone loves puppies / Nobody likes cancer

Unfortunately, the world of celebrity partnerships seems to be rife with situations that morph into "cancer puppies". And ultimately it serves to remind us of a few important facts of life, not the least of which is that these are people, actual human beings. Just like any "normal" person, for all of their talent, beauty and strength, they are just as flawed as the rest of us. They are just as vulnerable, just as prone to imperfection, just as human.

So maybe its time to let these folks step down from the pedestal and let them be themselves, let them be "mere mortals". Whether we agree with them or not, particularly in these volatile times, maybe we need to remember what the Police once shared at another tense moment -

From RGM -
Regular readers will know that I am a cycling fan and practitioner. However, I am not a follower of the new school - carbon fiber, electronic shifters and the like. I like steel. The frame of my bike was made slowly, by one guy in Bergamo, Italy - 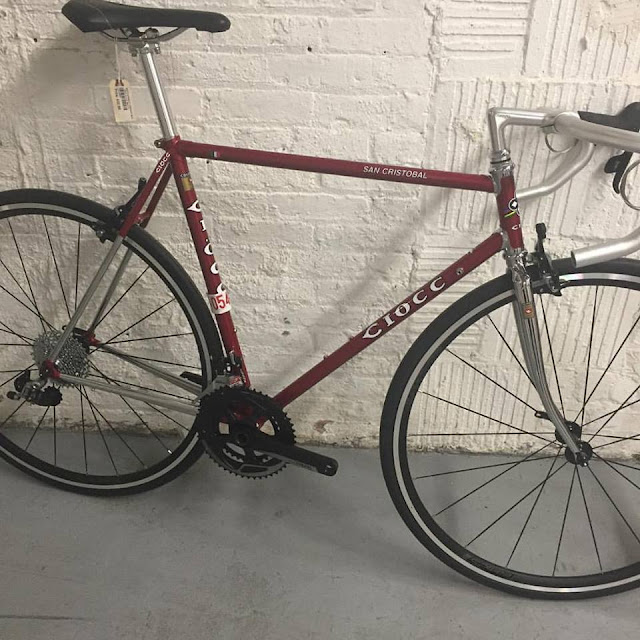 The key materials - Columbus SL tubing. Not the latest and lightest, but rather the same tubing that has been utilized for decades - Times have changed, but not unlike Vinyl LPs, there are devotees out there (this guy included) who prefer riding steel to carbon fiber. I'm not saying this is a debate of right or wrong (although I know I am right). I don't have any misplaced fantasies about returning to 1984 and finally winning the Ohio/West Virginia USCF Intermediate road race and going to the Nationals (I still can't believe that group that went with the Senior Cat 2 breakaway didn't get DQ'd!). I am 53, I have a more-than-full-time job running an adult education center along with a pretty hectic evening weekend gig as a brand consultant and sometimes writer. During the winter months I head to the gym for spin sessions. But when the weather breaks and I have the time, I take to the road. It is not an issue of simply getting exercise - I have the gym for that. For me, time with my bike is precious and something to be savored. I realize that I am a romantic, and perhaps a bit of a dinosaur, but there you go.
If there is a poet laureate of hand made bicycles, it would be Richard Sachs.
And it is for these reasons that I find the latest collaboration between Richard Sachs and RGM so cool!
The MODEL 500-GMT-RS is based on the Model 500-GMT, but with the added flourish of the Richard Sachs logo enhancing the GMT hand.
To be fair, there are a lot of young aspirants entering the fray, and trying to find their way as watch brands in the US. But just as Richard Sachs has set (at an outrageously high level) the standard for any frame builders to follow, Roland Murphy and the team at RGM continue to set the standard for those that hope to follow here in the US.
So if like me, you crave a bit of romance in your life, you can strap some Richard Sachs / RGM magic to your wrist.  Limited to 50 pieces, and priced at an accessible $4,750.
Here are the pertinents -

The Model 500-GMT is the first RGM with a bi-directional-turning GMT bezel. The watch is designed as a sport watch that is also ideal for travel when using the 24-hour GMT hand and bezel. To help ensure durability, the watch has two case-back gaskets, a 2mm thick sapphire crystal, and a high-quality screw-down crown. The bezel is deep engraved, and the numbers are ceramic-filled. We have also designed ribbing on the case side creating a beautiful aesthetic for this versatile sport watch. The dial and hands have X1 SuperLumaNova for low light visibility.